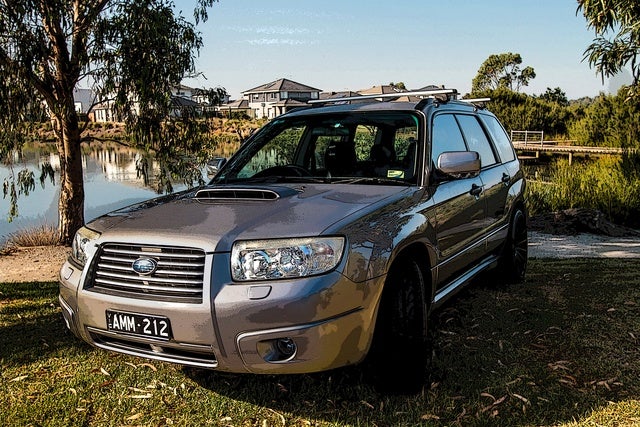 In an effort to draw in more of a male audience to accompany its wide popularity among female drivers, the 2006 Subaru Forester ups the horsepower, stiffens the suspension, and makes improvements to the manual transmission. This small SUV is a big seller because it combines SUV versatility and ride height with the easy feel of a car.
The 2006 Forester is all-wheel drive and comes in four trims. The previous 2.5S has been dropped and replaced with a 2.5X Premium. The base 2.5X, 2.5X, and 2.5X L.L. Bean edition all use a 2.5-liter, SOHC flat-4 engine that gets 8 more horsepower to hit 173-hp. The turbocharged 2.5XT Limited also gets a boost of 20 horsepower to hit a more respectable 230-hp in a DOHC version of he flat-4. Improvements to the intake manifold and exhausts on the XT Limited enhance overall performance. The standard 5-speed manual transmission has been altered to give more short-throw shifting. A 4-speed automatic is also available on all trims but the L.L. Bean.
Design changes to the front end, grille, and exterior lights were also done in the 2006 Forester. Bumpers are now body-colored, and turn signals are incorporated into the side mirrors. Because of the redesigned exhaust, ground clearance has increased by half an inch.

Owners of the 2006 Forester praise the turbo power and performance, though there is some turbo lag. The all-wheel drive continues to earn praise in snowy climates, even though the Forester is technically not an off-roader. Good gas mileage for an SUV, lots of headroom, and wide visibility are other plusses. The non-turbo lack of power is disappointing, along with an annoyingly revving engine. Legroom can be cramped in the back row.

What's your take on the 2006 Subaru Forester?

Heather Liked it so much i bought one. Love awd and doesn't feel like I'm driving a tank. Very roomy

Users ranked 2006 Subaru Forester against other cars which they drove/owned. Each ranking was based on 9 categories. Here is the summary of top rankings.

Have you driven a 2006 Subaru Forester?
Rank This Car

I Do Not Know Where Loud Noise Is Coming From?

Can You Replace A 2006 2.5xt Subaru Forester Turbo Engine With A Regular En...

Bought the car from a friend a a used dealer ship with an engine leak he said would fix...by the third attempt he told me the engine was blown...he said it ran out of oil

GuruMKX7P asked a 2006 Subaru Forester 2.5 X Maintenance & Repair question about a year ago

How Can A Find A Supplier With This Item?

Anyone know where I can get a a.c. clutch kit for the compressor? I have looked all over.

Guru2JBNJ asked a 2006 Subaru Forester 2.5 X General question about a year ago

I CANT SALE MY CAR ON LET GO

WHY CANT I SALE MY CAR ON LET GO

I recently acquired a 2006 Subaru Forester 2.5x (LLB Edition) with mileage at 150,000. During low speed turns (i.e. entering a driveway), the front end chatters and makes a light groaning sound. No wa...

22 views with 4 answers (last answer about a year ago)