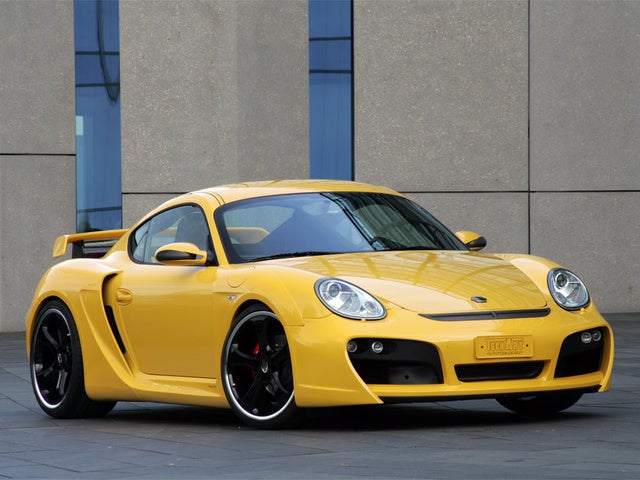 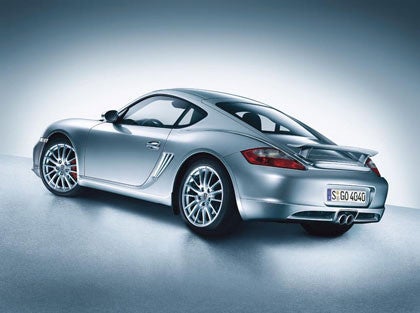 The Porsche Cayman S can be seen as a brilliant reinterpretation of the Porsche sports car. Some reviewers even argue that the mid-engined Cayman S corrects forty years of engine misplacement, i.e., the rear-engined 911. Others contend that Porsche has simply added a roof to the Boxster. Viewed from the perspective of its various systems the Cayman seems more than the sum of its parts.

From the viewpoint of styling, the front is almost pure Boxster, but with some new touches like the round foglights. The side, rear quarters feature slatted air scoops, and the tail growls with center dual exhaust pipes. The hatchback adds 9.1 cubic feet of storage to the 5.25 cubic feet in front storage retained from the Boxster.

Of course, under that hatchback floor and ahead of the rear axle lays a 3.4-liter boxer 6 that spins out 295 hp with a 7,300 rpm redline. Neither pure Boxster nor 911, the engine begins with the Boxster 3.2-liter engine. The larger Cayman 3.4-liter six imports the variable intake manifold and cylinder heads of the 911 Carrera S along with its VarioCam Plus valve timing and lift system. Bolted up to a close-ratio six-speed manual transmission - a four-speed Tiptronic is optional, but not the performance choice here - the Cayman S, which weighs only 2,955 pounds, jumps from 0 to 60 in 5.1 seconds topping out at 171 mph.

With the coupe roof, the Cayman S, according to Porsche, doubles the torsional rigidity of the Boxster. Porsche engineers have also stiffened the strut-type suspension springs claiming ride comfort would remain unaffected. Thicker antiroll bars have also been added. The famed Porsche test driver, Walter Rohrl piloted a Cayman S around the Nurburgring's north sector track in 8 minutes, eleven seconds - four seconds faster than a base 911 Carrera that he also piloted.

There are numerous performance options which quickly drive the base price past $70,000. Reviewers felt that Porsche had created another classic and only questioned whether the stunning performance of the less expensive Cayman S would not threaten sales of Porsche's flagship 911.

What's your take on the 2006 Porsche Cayman?

Have you driven a 2006 Porsche Cayman?
Rank This Car

anyone no a reputable car transport service from west coast to east coast?

How To Clean/replace Mass Air Filter.