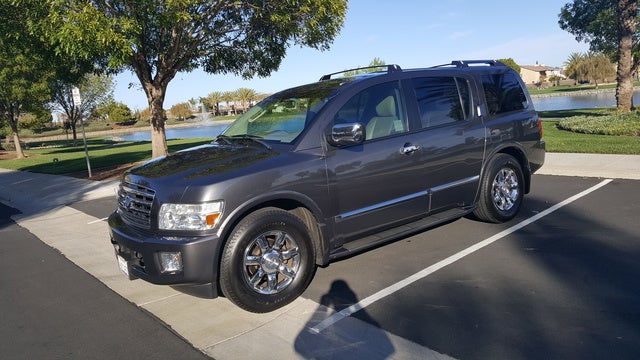 Average user score
4.8 ⁄ 5 stars
Based on 11 reviews
Would Buy Again by Debbie — Love it,love it ,love it!!!!! Infinity makes a great car...Definitly would buy again!!!! Bought an extended warr ,because as you know when the warr end's everything breaks..Had not had many issues wit... Read more
Another Gas Guzzler by Jenna — I think we averaged 14 MPG which is better than my Explorer but not when gas prices are + $3/gal. We loved this truck which had 3rd row seating and captain's chairs in the back and front. DVD player ... Read more
Very Nice by Tony_Najem — I like the amazing power, acceleration, braking, body laguage & high speed but dislike the sand offroad performance due to heavy & overweight body. Cost,service, maintenance & mileage are satisfactory... Read more

The Nissan Armada-based QX56 was introduced in 2004, and continues for a third year of production with a few minor changes. For 2006, Infiniti's full-size SUV gains a standard Bluetooth feature, power-folding exterior mirrors, and a split-folding third row seat. The QX is still in its first generation of production, and there are no changes planned for the near future.

The QX56 competes with the Toyota Land Cruiser, Cadillac Escalade, and Lincoln Navigator. The full size SUV seats seven or eight passengers (depending on the second-row configuration), and offers 20 cubic feet of cargo space (over 61 cubic feet with the seats folded).

Reviewers have praised the QX56 for comfort, security, and performance. It's roomy, spacious, and has Infiniti's trademark sleek solidity. A 5.6-liter V8 engine delivers 315 horsepower and has the power to tow up to 9,000 pounds. And when it comes to safety, the '06 QX56 has an array of standard safety features, including ABS with traction control, front and rear anti-roll bars, side impact bars, and front, side, and overhead curtain airbags.

So what's the downside of this cushy SUV? A high sticker price puts it beyond many drivers' price range (and with Mercedes, Lexus, Audi, and Cadillac all competing for its market share, you've got to deliver a lot of bang for the buck). Gas mileage is, unsurprisingly for a big luxury wagon like this, pretty dismal: 13 mpg city, 20 mpg highway are the EPAs estimates.

The 2006 Infiniti QX56 is offered in rear-drive and four-wheel drive versions, but you're probably not going to take this big boy on any off-road adventures. Still, if money is no object and safety is your main concern, the Infiniti QX56 might be the choice for you.

Users ranked 2006 INFINITI QX56 against other cars which they drove/owned. Each ranking was based on 9 categories. Here is the summary of top rankings.

How Long Does This Car Usually Last For Mileage Wise

My Passenger Seat Will Move Back And Forward, Up And Down But The Back Want...

Just put in a used motor in this qx56 . Run pretty good seems to have a little miss but the exhaust manifold is glowing Bright red right at the collector. Oh and speedometer doesn't work. Any tho...

What It Means Engine Light On

What Does It Mean When My Navigation Screen Says Dvd Device Is Connected To...