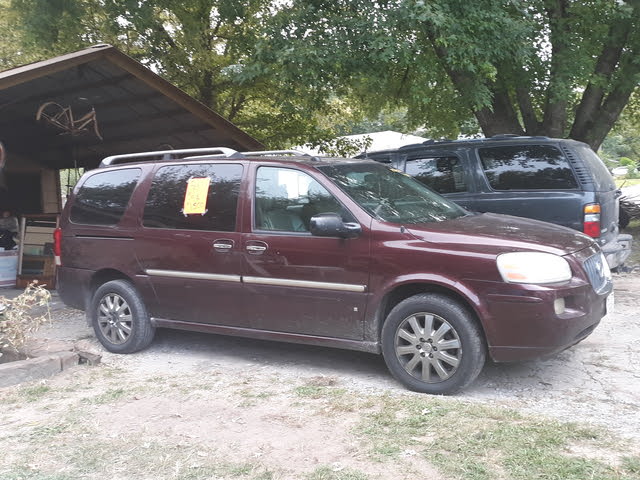 For its second year, the 2006 Buick Terraza sport van gets a new 3.9-liter, 235-hp V6 that adds more muscle and response to the SUV-styled minivan, providing further versatility in terms of towing and sporty performance.

The 2006 Terraza comes in both front-wheel and all-wheel drive, but the new engine is optional only with front-wheel drive models. The standard engine on either the base CX or CXL trims is a 3.5-liter, 200-hp V6 paired with a 4-speed automatic transmission. To make up for its stunning lack of airbags, the 2006 Terraza adds side curtain airbags for the second row in addition to the front-side airbags. These are standard in the CXL and optional in the CX. Standard base features are not lacking however. Load-leveling suspension and ABS brakes improve performance. Stabilitrak comes standard with front-wheel drive models. Roof rails and interior ceiling rails expand upon the already numerous storage options. OnStar, cruise control, and a DVD player are part of the base package. Perhaps this is why the Terraza is considered the most expensive and most luxurious minivan in its class.
Dual sliding doors reveal three rows of seats for seven passengers. Both rows can be removed, though the second row captain's chairs are cumbersome. The backs fold to give you more cargo space, but they don't fold into the floor in order to accommodate the 2006 Terraza's 25-gallon gas tank and AWD system.
Owners love the sporty SUV exterior looks of the 2006 Terraza, and the new engine provides much wanted power. Seats are comfortable, but legroom is cramped in the first two rows. For its high cost, owners complain that it doesn't have a power tailgate and that access to the third row is difficult. There have been problems with the power sliding doors and reports of rattling coming from the ceiling rail system.

Users ranked 2006 Buick Terraza against other cars which they drove/owned. Each ranking was based on 9 categories. Here is the summary of top rankings.

Have you driven a 2006 Buick Terraza?
Rank This Car

How Do I Disable The Alarm On The 2006 Buick Terraza?

How do I disable the alarm on the 2006 Buick Terraza? Its not even activated and it still goes off randomly. The only way to stop it is to put the key in the ignition and start it up.

622 views with 4 answers (last answer about a year ago)

Why Is There A Light Brown Oily Gunk In The Radiator?

Thick light brown oily gunk mixed in with antifreeze. Did pressure test on radiator, Held pressure fine. No leaks anywhere. Head gasket, is ok. No crack in block. Has no oil cooler so it can't be ...

Alarm Going Off, Won't Turn Off