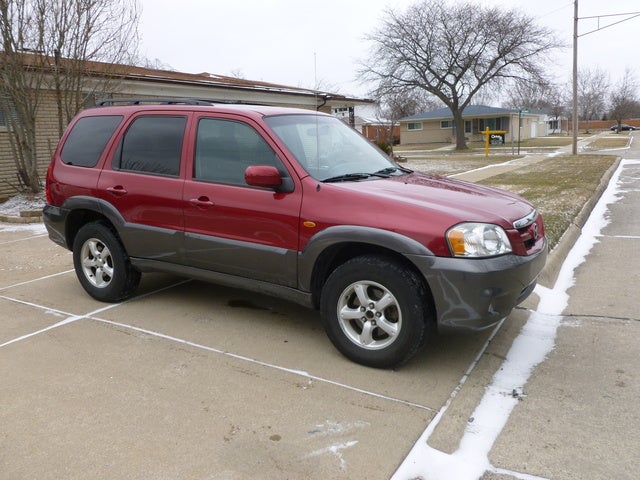 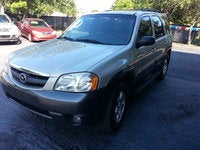 For 2005, the Mazda Tribute compact SUV received a redesigned exterior and upgraded features, as well as more power under the hood. Exterior styling changes included a sleeker, sportier look with a redesigned front end. Anti-lock brakes were now standard on all Tribute models, and an electronic four-wheel drive system replaced the previous year's hydraulic system.
The Tribute was available in two basic trim packages for 2005, and both were available with either front-wheel drive or four-wheel drive. The basic Tribute i package was a five-passenger vehicle with a 2.3-liter inline four-cylinder engine that produced 153 horsepower (up from 130 horsepower the previous year). The front-wheel-drive version was equipped with a five-speed manual transmission, while the four-wheel-drive version came with a four-speed automatic transmission.
Standard features for the Tribute i included air conditioning, power windows, power door locks, dual airbags, a tilt steering wheel, power exterior mirrors, a roof rack, and an AM/FM stereo system with a CD player.
Stepping up a notch, the Tribute s was powered by a 3.0-liter double-overhead-cam V6 engine that produced 200 horsepower. It was linked to a four-speed automatic transmission. A manual transmission was not available on the Tribute s.
Standard features for the Tribute s were essentially the same as for the Tribute i, with a few upgrades, such as cruise control and steering-wheel-mounted controls. Options included leather seats, power seats, a leather-wrapped steering wheel, a CD changer, and a DVD player.
Drivers liked the Tribute SUV's sporty nature, as well as its handling, cornering, peppy performance, storage space (for a compact SUV), and even its gas mileage (for the four-cylinder models). On the downside, drivers noted that wind noise could be distracting at high speeds, and that the vehicle lacked a number of options available on competitors' vehicles.

Have you driven a 2005 Mazda Tribute?
Rank This Car

have a 2005 mazda that has a broken bolt on the idler pulley. bolt broken or twisted off. this happens about every 20,000 miles. the rest of the bolt has to be tapped and removed.

273 views with 4 answers (last answer about a month ago)

Cranks but wont turn over code was up fuel rail sensor going down highway car stalled tow home changed fuel rail sensor no start only a clunk noise at fuel pump so I changed it and the fuel filter...

The Air Conditioner Is Blowing Hot Air. How Do I Fix It?

I have a 2005 Mazda Tribute. The air conditioner has been working fine, until this morning. It's blowing out hot air only. The heat still works. Any suggestions??

2005 Mazda Tribute makes a whining sound while accelerating. the more you increase speed, the louder it becomes, on the highway, for instance.. While coasting at steady speed, it's barely noticeable...