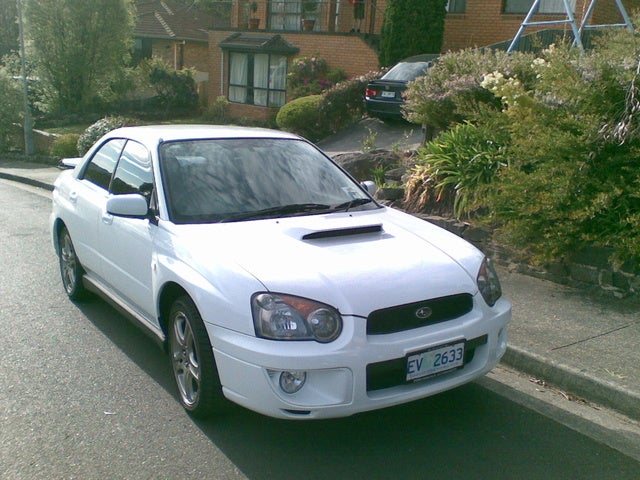 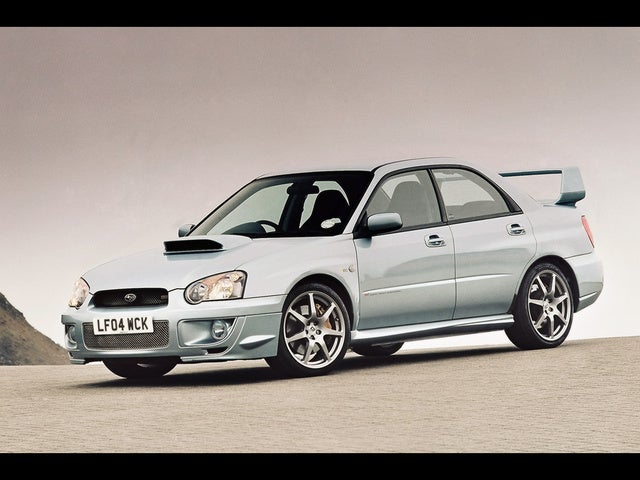 Though the 2004 Subaru Impreza gets some tweaks to is front and rear ends, new wedge-shaped lamps, suspension improvements, and new styling for its instrument clusters (ho-hum), the big news this year is the introduction of the Impreza WRX STi, a true street racer with the garish looks to match. The STi builds on the WRX (which built on the RS) and offers a heart-pounding 300-hp with its 2.5-liter turbocharged H4 engine and 6-speed manual. Not bad for a four-door sedan. It isn't shy either, with a large dual-plane rear wing, chin spoiler, giant hood scoop, and 17-inch wheels in either gold or silver.

But the STi isn't the only rally Impreza. The WRX sedan and wagon return this year with new sport seats and a centrally-located tachometer, mimicking a true race car. The WRX models feature a turbo 2.0-liter H4 that hits 227-hp with a 5-speed manual or 4-speed automatic. The RS sedan and TS Sport and Outback Sport wagon are powered by a 2.5-liter, 165-hp H4, with the same transmission choices. In 2004, these gets new halogen lights, active head restraints, and a center switch for the power locks. The TS wagon gets keyless entry this year. Also new is a Premium Package for the WRX, which adds heated mirrors and seats, a sunroof, and rear spoiler. Dual front airbags and ABS brakes are standard throughout the 2004 Impreza lineup, and this year electronic brakeforce distribution is added. The WRX models have side impact airbags as well.

The wagons comes with a split-folding rear seat, roof rack, and 62 cubic feet of cargo space. The front passenger seat also folds down for extra-long objects. The WRX sedan does not have this feature, but offers a trunk pass-through/armrest in the backseat. Turbo power is a big hit with drivers of the 2004 Impreza, and they especially love the WRX wagon, which offers a combo of fun and practicality. Gas mileage is surprisingly good, and the AWD is outstanding, say owners. Acceleration is unbeatable. Criticisms mention the lack of a sunroof option on all models, poor cupholder location, paint chips, inadequate tires, and a rough city ride with WRX.

What's your take on the 2004 Subaru Impreza?

Users ranked 2004 Subaru Impreza against other cars which they drove/owned. Each ranking was based on 9 categories. Here is the summary of top rankings.

Have you driven a 2004 Subaru Impreza?
Rank This Car

What would i need to swap my 04 subaru impreza 2.5 rs motor woth a wrx engine? What motors are compatible?

I know very little about cars and I am looking to make some easy/cheap upgrades on my 04 subaru impreza ts. I have looked through a lot of parts and pretty much all of them are for the wrx or sti....

I have a 2004 Subaru Impreza 2.5 SOHC the engine recently went so I got a 2006 2.5 SOHC out of a outback and swapped the harness in and takes over along with the crank pulley in the car still will...