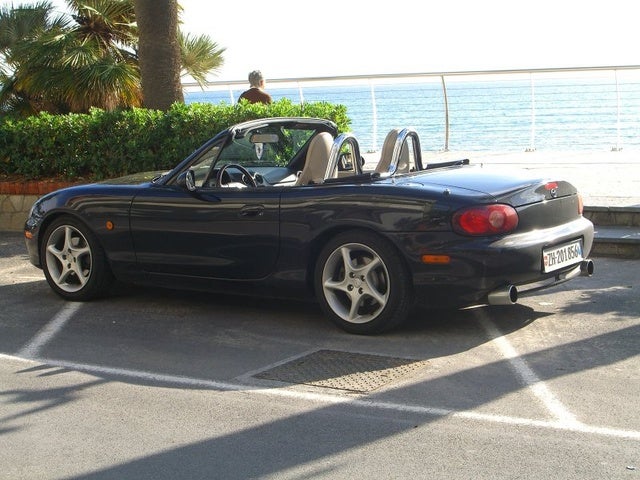 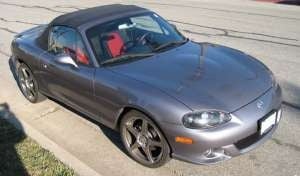 The MAZDASPEED MX-5 Miata was the second production car available in the U.S. with the special sports package created by MAZDASPEED, Mazda's in-house motorsports and specialty-car tuning division. The first was the MAZDASPEED Protege, which was available as a limited edition vehicle in 2003.
The MAZDASPEED MX-5 Miata was also a limited edition, based on Mazda's popular two-seat roadster. Mazda started by giving the MAZDASPEED MX-5 Miata a 25 percent power boost over the standard Miata, thanks to a turbocharged and intercooled 1.8-liter four-cylinder engine that pumped out 178 horsepower. The standard (and only) transmission was a six-speed manual, with refined shift points and a strengthened clutch.
Helping to improve the MAZDASPEED Miata's handling were a lower ride height, beefed-up springs and dampers, a modified double-wishbone suspension, and rack-and-pinion steering. Outside, only two colors were available -- Velocity Red and Titanium Grey.
Standard features included black cloth-trimmed upholstery, power windows, power door locks, dual second-generation airbags, a black vinyl convertible top, a glass rear window, anti-lock braking system, 17-inch alloy wheels, and a Bose six-speaker audio system with CD. A Grand Touring package added black leather bucket seats and a black cloth soft top, among other features.
For the most part, drivers gave the MAZDASPEED Miata positive marks for such factors as performance and value, but some had quibbles with the vehicle, including its air conditioning and gas mileage. In addition, some drivers felt that the Miata's ride could be a bit rough and that the seats were less then comfortable, especially over the long haul.

What's your take on the 2004 Mazda MAZDASPEED MX-5 Miata?

Have you driven a 2004 Mazda MAZDASPEED MX-5 Miata?
Rank This Car

My Odometer Dashboard Light Appears To Be Burned Out. How Complicated Is I...

Where Is The Release Button For The Gas Cap On A 2004 Mazda MazdaSpeed MX-5...

Trying To Gift My Cousin A Repair Manual For '04 Miata Mazdaspeed Turbo. An...

Tried looking for a repair manual for '04 turbo Miata.