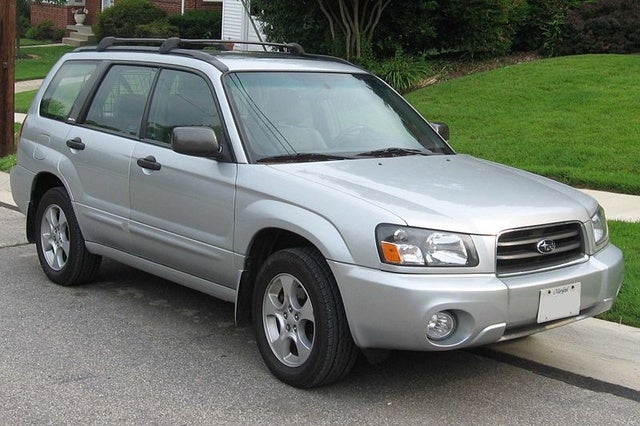 Average user score
4.5 ⁄ 5 stars
Based on 17 reviews
Great Awd For Every Situation by Kieran — Reliable as hell, never needs repairs! Always starts, good fuel economy, good off-road with car-like performance on-road. Would suggest this AWD to anyone looking at a little 4X4. It tows a trailer... Read more
Good Car For Your Money ! by Donna — Everything ! Love yhe perfomance in handling when trying to avoid an accident once. Big money saver because of good gas mileage and no need for any major repairs. Love driving this car short and long ... Read more
Can Out-accelerate A Porsche Boxster And Carry A Full Drum Kit & P.a. System by Derek — it's the rare XT model they made for a couple of years before they realized the gearing was too short... does 0-60 in 5.3 seconds and the 1/4 mile in 13.8 seconds.... how many sports cars can do that.... Read more 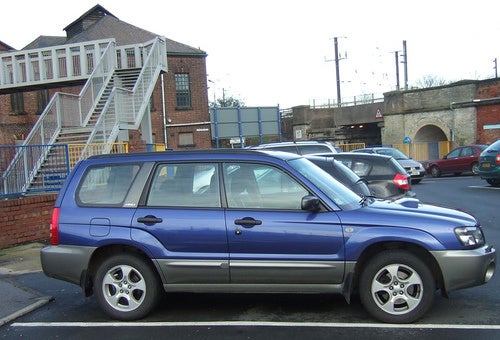 Though it was probably responsible for kick-starting the crossover trend, the 2003 Subaru Forester gets a major overhaul this year in an effort to stay competitive with the growing number of car-like SUVs hitting the market. Blending the versatility and cargo room of an SUV with the safety, maneuverability, and comfort of a sedan, the Forester has remained a popular family car. For 2003, the body and suspension have been stiffened and brake size increased for more stable performance, while overall weight has been reduced to accommodate more standard features.

Trim names have changed for the 2003 Forester. Now available as the base 2.5X and 2.5XS, about the only thing that's stayed the same is the full-time AWD and the 2.5-liter, 165-hp H4 engine with choice of 5-speed manual or 4-speed automatic. New standard features on all Foresters include bigger 16-inch tires and keyless entry. In addition to ABS brakes, dual front airbags, and foglights, the 2003 Forester gets standard side impact bags, active head restraints, and a Hill Holder system that finds the right gearing to prevent rollbacks. The 2.5XS adds electronic brakeforce distribution to its front and rear disc brakes (the X only has front discs). The IIHSA gave the 2003 Forester its best pick for a compact SUV.

On the outside, a bigger grille and redesigned taillights are most noticeable on the 2003 Forester. Fender flares increase in size and halogen headlights are added. Interior rear legroom has been enlarged slightly, though the backseat is still most suitable for children. Cargo room remains the same, at 64 cubic feet with the split-folding seats down. Drivers love the reliability and strength of the AWD on snow and ice, and parents appreciate the safety and reliability of the 2003 Forester. Handling and turning ratios also get high marks. But owners feel the Forester is in need of a power boost, and the most common complaint was the inadequate tires. There is also mention of road and wind noise and a confusing climate control system.

What's your take on the 2003 Subaru Forester?

Kimberely I love my Forester. It's cute, runs great, easy to repair. Although I replaced the motor, no fault of the car (it was in storage and mice built nests in the catalytic convertor). I just wish it was an STI. I love it with studded tires in Tahoe in the winter where I live, my little subaru is a badass in the snow. I zoom past everyone with the greatest of ease.

Have you driven a 2003 Subaru Forester?
Rank This Car

I have a 2003 Subaru forester 2.5 xs and I would like to upgrade my engine for an XT model or something that will get me going faster. I want to do it but I don't have a clue where to start. I know I ...

Please Advise On Problem Or Fix For Window Staying Down

My 2003 Subaru forester driver door window and front passenger window not coming up from driver control switch,, they both go down only from the switch, the passenger window goes up and down using t...