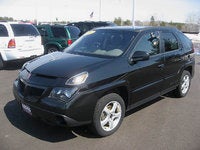 CarGurus has 22 nationwide Aztek listings and the tools to find you a great deal.

The first U.S-produced crossover vehicle, the Pontiac Aztek had an auspicious and somewhat unsuccessful start due to its offbeat and offputing appearance. Gradually, as people experienced its versatility, roominess and storage space, a growing fan base developed. The 2003 Pontiac Aztec was offered as either a front-wheel-drive or all-wheel-drive Verstrak. Both carried a 3.4-liter 185-hp V6 mated with a 4-speed automatic.

Few additions happened for 2003, except for an optional DVD system and XM radio. ABS brakes and front side airbags, which were once standard on front-wheel-drive versions, were now optional. Though based on the Montana minivan platform, the 2003 Aztek isn't so much a people-mover as a cargo-hauler. It has only two rows of seats, but the back row folds down and can be lifted out. Unique to the Aztek, the front passenger seat also folds down. This means lots of storage configurations. Capacity is 93 cubic feet when all the seats are down. A cargo net or roll-out cargo tray offer different trunk storage options. Also unique to the Aztek is the removable center console that doubles as both a CD holder and a cooler. A tent/air mattress package lets you car camp, and stereo controls and a lighter are in the tailgate. Various packages offer increasing levels of creature comforts.

Though it offered AWD, the 2003 Aztek sits low and is not meant for off-roading in any way. It's more a compromise between the versatility of a minivan with the power and adventure of an SUV. Most owners say it is comfortable and handles smoothly, more like a smaller car. The inside is roomy and versatile. They also like the cooler and the great fuel economy. Others feel the suspension is rough and report major blind spots caused by the rear spoiler. The tailgate seems too heavy and never properly opens or closes. The biggest desire was for more horsepower. The 2003 Aztek also did not do well in front impact safety ratings.

Have you driven a 2003 Pontiac Aztek?
Rank This Car

CarGurus has 22 nationwide Aztek listings and the tools to find you a great deal.

How To Tell If Vehicle Is A Base Model By Vin?

127 views with 2 answers (last answer about a year ago)

Why Car Stalls When Brakes Are Applied ?

Ignition Key Will Not Return To The Off Position To Allow The Key To Come O...

Will The Programming On A Chipped Key Get Erased If A Magnet Sticks To It?