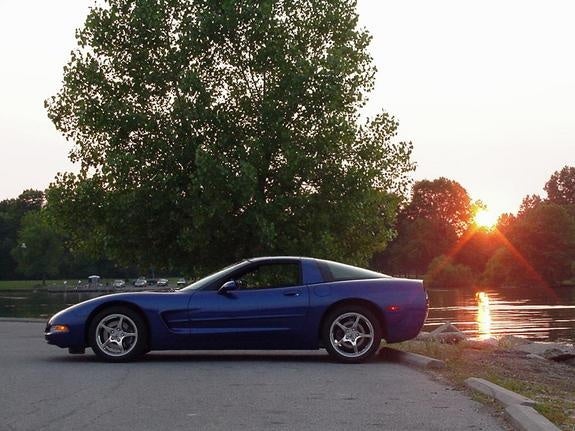 The 2003 Chevrolet Corvette is part of the C5 group or generation, widely lauded for its improved ride and performance. All trims include sport seats, fog lights, and a dual-zone climate control system. All 2003 cars had 50th anniversary badging in the nose and rear deck.

What's your take on the 2003 Chevrolet Corvette?

GuruY6XTG 1987rf - while your 2003 Corvette is a 50th Anniversary Corvette (as are all 2003 Corvettes), it is not a 50th Anniversary EDITION. The 50th AE included special paint (anniversary red metallic) and shale interior. If your car has fenf=der badges, they have been added and are not factory installed. Besides the color and a few embroidery additions, its functionally identical to your beautiful Spiral Gray Corvette. Don't get hung up on labels. Go out and enjoy your Corvette!

Have you driven a 2003 Chevrolet Corvette?
Rank This Car

What portable battery charger should be used for the 2003 50th anniversary edition?

POSTING NOT SHOWING UP ON WEB SITE

LISTED MY CAR & PAID FOR AD, BUT ITS NOT SHOWING UP IN LISTINGS, SAYS MUST CONFIRM E MAIL ADRESS, BUT NO EMAILS CAME???

My Car Is Dead After Battery Was Replaced.

i installed a new battery in my 2003 corvette, but everything still dead. do you think it maybe a fuse.

If I'm Selling My Car, Why Do I Have To List My Banking Info?