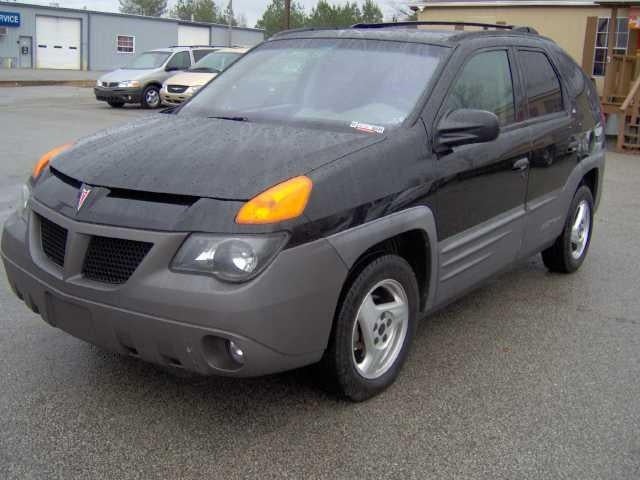 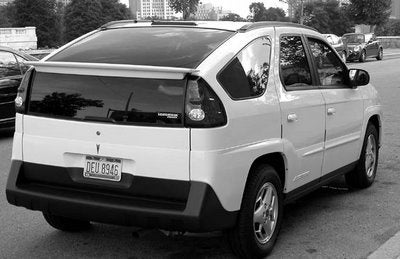 Whatever you think of its looks, the 2001 Pontiac Aztek was a versatile crossover SUV aimed more at adventurous youths than soccer moms and family transport. Looking more like a hatchback on steroids, with large black front and side moldings, the 2001 Aztek came as a base or GT model. Both featured a 3.4, 185-hp V6 and 4-speed automatic transmission. This was the first U.S. domestic crossover vehicle on the market. Initially sold as front-wheel drive, a Versatrak all-wheel drive version with independent rear suspension became available later in the year. Its biggest claim to fame was as Richard Hatch's prize on the first Survivor series. But like that series, people either love it or loathe it.

Though not an off-road vehicle, the 2001 Aztek had a lot of appealing features for drivers needing to haul stuff other than passengers. With only two rows of seats, both the rear seats and the front passengers seat folded down. The rear seats could also be removed, expanding cargo space to 93 cubic feet. The hatch offered a fold-down tailgate and an optional roll-out cargo tray. A youth-oriented package added a built-in tent and blow-up mattress for car camping, and even added stereo controls and a lighter in the trunk. While the base model had air conditioning and power options, the GT added cruise control, dual climate control, remote keyless entry, traction control, and a unique removeable center console that doubled as a cooler. Heated leather seats and rear captain's chairs were options, as was a heads-up dash display that was less distracting for drivers. The dash instrumentation itself was designed by a NASA engineer.

The most overwhelming complaint about the 2001 Aztec is the way it looks. Ugly is bandied about. Funky is more politely suggested. But drivers say if you can get past the looks, the Aztek is roomy, functional, and handles smoothly on the road, more like a car than an SUV. It is comfortable and gets good gas mileage for its size. Seats are easy to remove. Problems crop up with the A/C condenser. Other complaints say the tent is cheaply made, it needs more power for towing capability, the one-touch open hatch does not open with one touch, and the check engine light comes on frequently.

Roger OWED IT FOR 12 YEARS STILL OWN IT , NEVER LET ME DOWN , VERSATRACK GOES THROUGH ANY SNOWSTORM OR RAINSTORM , TRIP COMPUTER READS 20 MIES PER GALLON AVERAGE , HEAD-UP-DISPLAY , gm NEVER marketed it right that's why it failed , still have it , though it is starting to cost a lot to keep everything working , mmmmmmmmmmmmmm , maybe it's time , but i can't seem to part with it ...............

Have you driven a 2001 Pontiac Aztek?
Rank This Car

Does anyone know the voltage coming out of the resistor at each fan setting? I'm trying to diagnose if my blower motor issue is the blower or the resistor. I have 12-volts at each connection going i...

2001 Aztec Will It Start In Neutral Position Besides Parked Position

Heat/fan Control Knob - No Heat/air At All & The Knob Won't Even Turn??

For a couple of years, the heat/air control knob only worked on a couple of settings (3 &5). Then it would work intermitently - suddenly it would turn off then turn back on. Recently, it has stopp...

778 views with 3 answers (last answer about a year ago)

My Odometer Has Gone Blank. I Assume It Is The Fuse. But After Looking At ...

My odometer has gone blank. I assume it is the fuse, but after looking at the manual cannot figure ourt which fuse to change. Any Ideas?

Was driving fine no problems got home parked it an shut it off and now wont start It has lights radio works n everything thought maybe it was the battery n tried jumping it but still nothing My br...