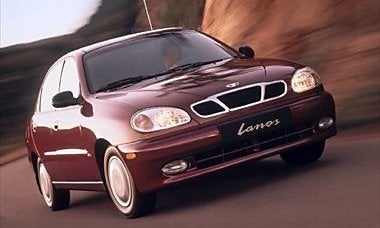 Have you driven a 1999 Daewoo Lanos?
Rank This Car

Love It By Ashlea

its awesome.... looks the part and is small so easy to park it runs on the smell of an oil rag and doesnt cost to much to buy or run. awesome first car for females such as myself. easy to clean as so ... Read More

i like this car because it is small and have good handling. its slow as crap with no antilock brakes. it squeak like crazy. it is a fun car to drive in the snow and in the city. parts are expensive an... Read More

Cheap and cheap, what can I say! Quality is acceptable, performance not to great, doesn't look like a oil painting, but it is affordable on maintanance and fuel. All in all not the worst you can buy, ... Read More

My Car By Peter

fine but it cant get more speed than 140 km / hour its strong and safe its acceleration is good but it needs more acceleration to go more faster than it can and it also needs more options like high qu... Read More

My Car By Nour El Din

Looking for a Used Lanos in your area?