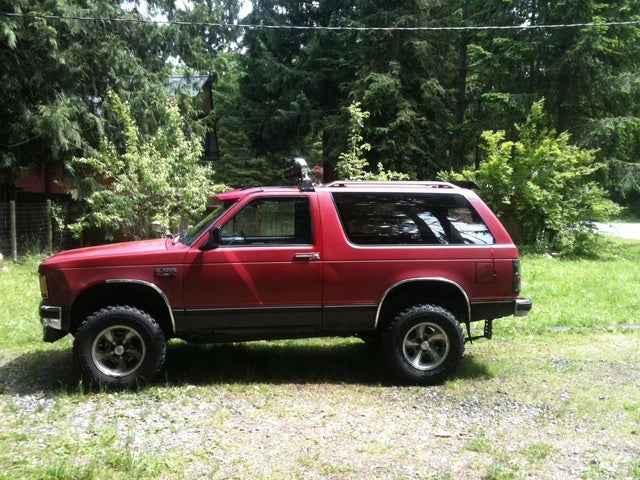 Comfortable And Economic By rvalder

My car is comfortable for use everyday and for trips with my family, is economic and easy to maintain, perfect to improve my skills in mechanics, but is from 1994 require more attention and i cannot u... Read More

It good for getting around in winter. Has horrible mileage. But all in all has a good engine with a bit of xtra power. Have used it to move a few time and folding the back seat down lets you haul larg... Read More

I like the fact that the S-10 blazer is easy on gas and it's perfect for smaller families. I like that this package is rare and almost hard to find. If you're looking for a small SUV, then the 1993 Ch... Read More

Preformance: Iffy my engine has a slight miss to it Build: its a well built truck, it can take some abuse though the rockers can rust out appearance: it was obviously garage kept because its paint is... Read More

well these s10 blazers are pretty good little suvs they just need to be maintained properly 220000 miles and it just started to give me problems but there mainly from improper maintenance from previou... Read More

Would Mind Owning One Of These Agian Just Want 4.3 L Instead By Ray

It was a decent older truck i bought it for $500 from my cousin took it off roading alot four wheel drive really held up but engine lost iol pressure and threw a rod somtimes i miss that blazer i h... Read More

Overall A Decent Car For Its Age By ipodko

All pretty much can be said of how many stars I have given it. It is my first car and I don't regret getting it at all! I do take it off throating sometimes, but it isn't always good for it. Read More

This car will smoke a tire off a rim and still have a cold engine this was my first car I was 16 I abused it ran it into a gas pump the door fell off I basically wrecked it it was dependable my brothe... Read More

I really loved this truck. It's just too bad that a rod broke in the engine and I didn't have the money to replace the engine. Of course right after I got rid of the truck I moved to a place where I h... Read More

4.3l Pig On Gas And Hevy In The Mud But Super Fun To Drive By Pat

Build Quality: she works good for what shes been threw. no big repairs to do. she needs a o2 censer trans pan gasket and just some tlc but for 2 years now i off road with it about 3 times a week and s... Read More