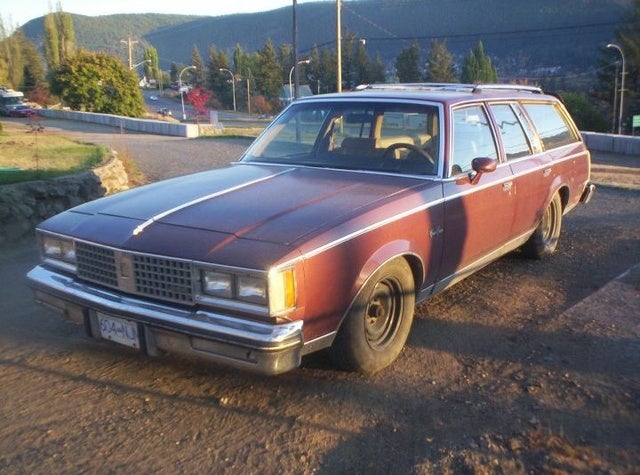 Have you driven a 1982 Oldsmobile Custom Cruiser?
Rank This Car

Performance: Acceleration - Adequate (though you can hear the gas sucking through the engine when you step on the gas). Braking - Surprisingly good considering the size of the vehicle. Handling ... Read More

Great Car. I Love It. I Get Compliments All The Time. By piella

Great car. Comfortable as can be with lots of smart, convenient features. Big, roomy bench seats front and back. Power everything. Sadly, it is old, gets poor mileage, only has driver airbag and i... Read More

Great car, who wouldn't want grandpa's station wagon? 3.3l V6 burns some good gas! tansmission is holding together so far, but I've only owned it for7 hours so its good. Also rearmost seats are rearw... Read More

The Hoopty Rolls! By Matt

This is the last of one of the great classic American automobiles...the station wagon. I bought this off a coworker who couldn't keep it and didn't want to see it in a demo derby. She passes inspectio... Read More

Very Solid Car Will Take You Any Where Roomy By Jerrett

great car will take you any where if you can afford the 12 mpg lot of room for cargo and family three rows of seats smooth ride bareley hear the 307 engine dont expect to get anywhere fast or try to p... Read More

This is American car manufacturing at its worst. I drove the V8 version, and it sucked up gas like no other, had no power and no torque either. It was a deathtrap and was ugly to boot. The only r... Read More