Looking for a New Mazda CX-5 in your area?

Mazda keeps the good in the CX-5 for 2021 and adds a new version to the lineup. 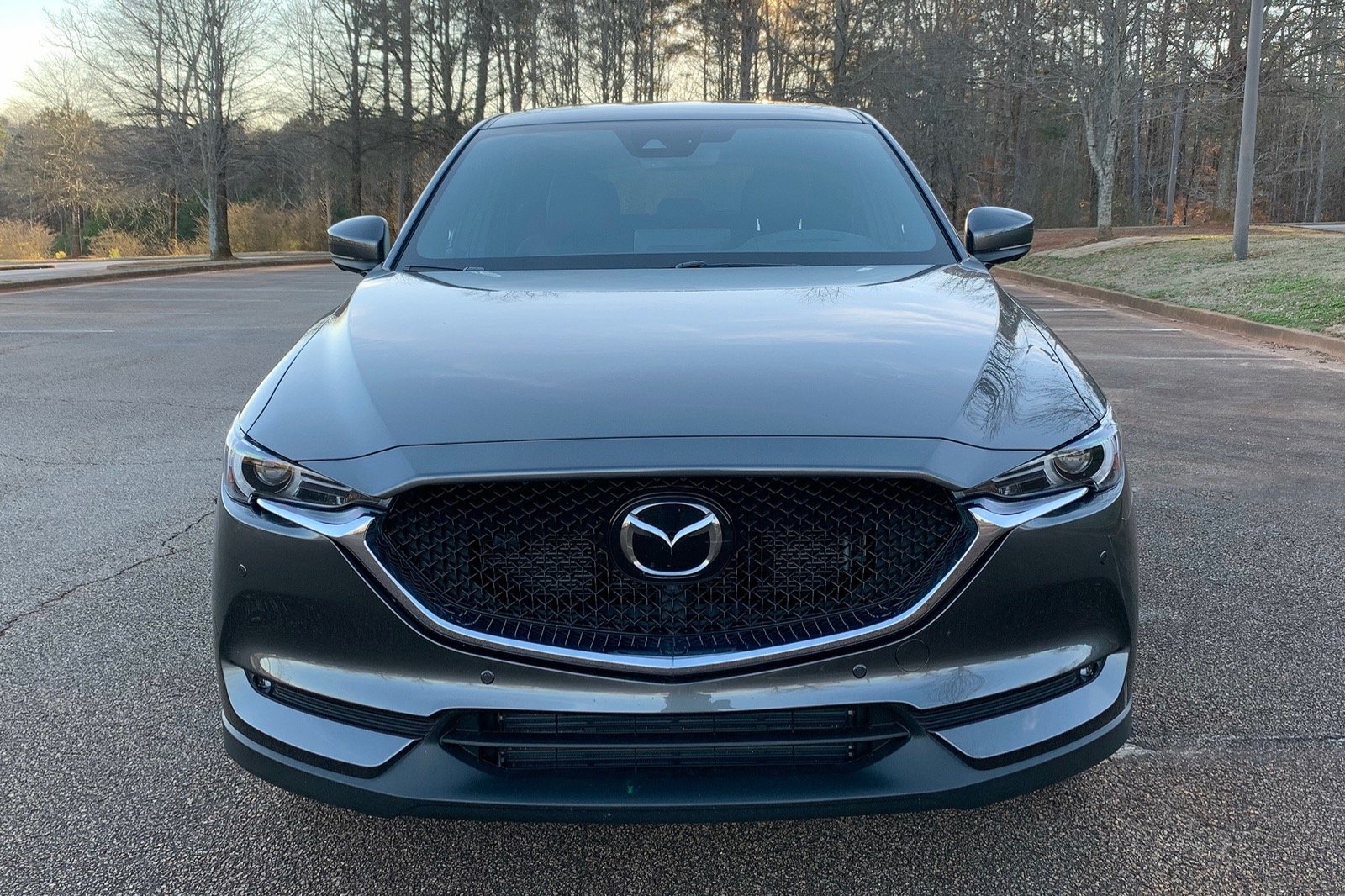 The 2021 Mazda CX-5 is a competitive compact SUV for buyers looking to satisfy the needs of the typical family. For the 2021 model year, Mazda has enhanced the model’s tech and discontinued the unpopular diesel engine in the United States. There’s also a new Carbon Edition for buyers to choose from. Despite the changes, the highlights and quibbles about the SUV are mostly unchanged from the 2020 model year. 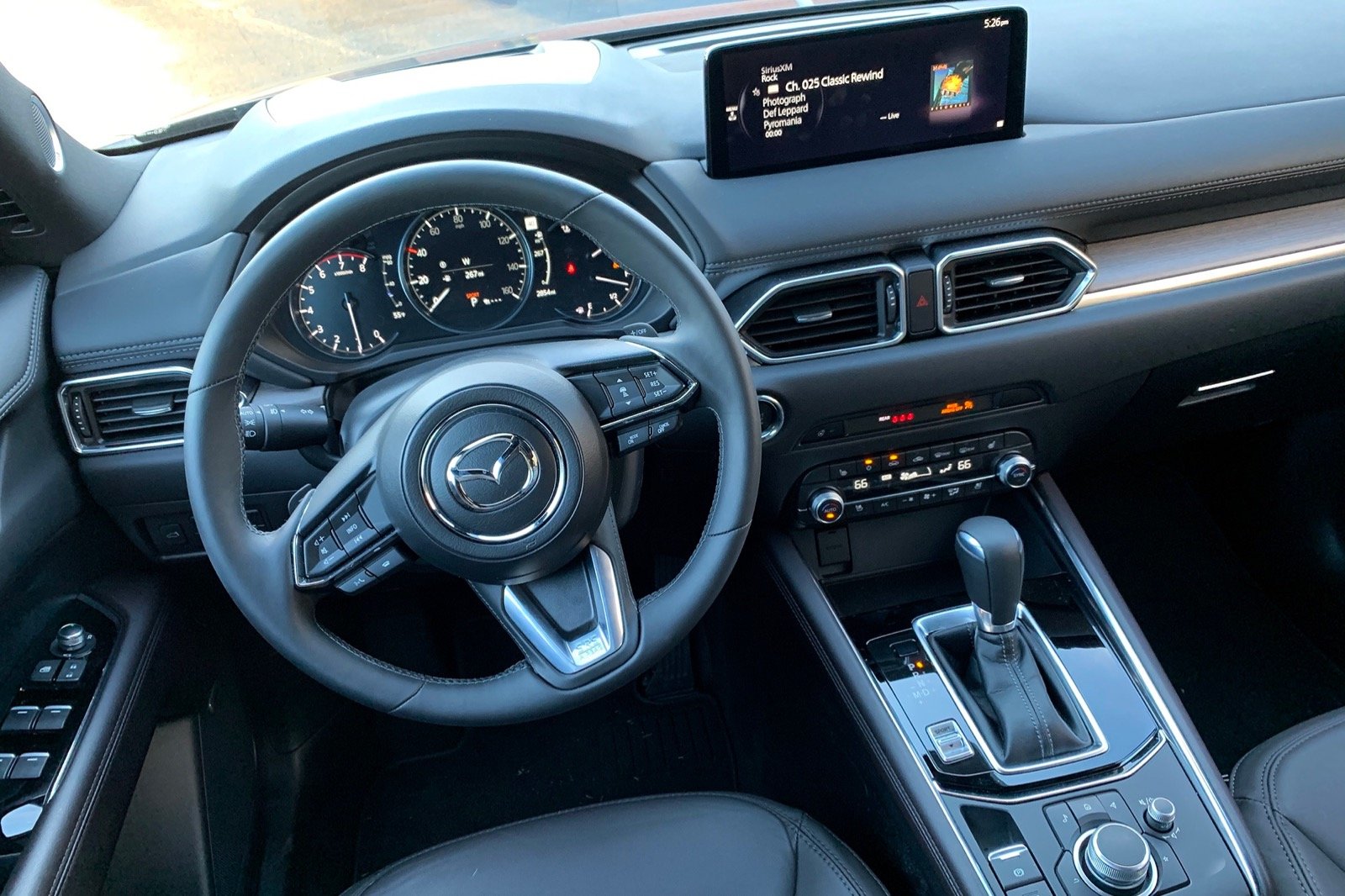 While some automakers are firmly in the lane of deeply-creased hoods, angled taillights, and chiseled grilles, Mazda has gone in the opposite design direction. The 2021 Mazda CX-5 is a smooth steed that looks slippery even when standing still. It’s no hot shot, but takes the played-out Mazda sameness in a stylish direction.

There aren’t large differences on the exterior of most of the CX-5 trim levels. The base CX-5 Sport comes with automatic on/off LED headlights, 17-inch gray metallic aluminum alloy wheels, a rear roof spoiler, and rain-sensing windshield wipers.

Mazda is offering the CX-5 Carbon Edition with the features of the Touring grade combined with the Touring Preferred SV Package plus a Polymetal Gray paint job, gloss black door mirrors, and 19-inch black metallic aluminum alloy wheels. The interior of the SUV has red leather seats and black honeycomb interior trim on the dashboard and door panels. Mazda has given the leather-wrapped steering wheel and shift knob red stitching.

In the CX-5 Signature, the model that was our tester, buyers get a vehicle that is solidly premium, rivaling the offerings from Buick, Infiniti, and Acura. It adds on what is in the Grand Touring Reserve with Caturra Brown Nappa leather seats and genuine wood trim up the ante in the car while design choices like a frameless auto-dimming rearview mirror with Homelink, ambient lighting, a black headliner, and 19-inch silver aluminum alloy wheels push that notion even further.

Styling in the top-tier model is well-executed with good fit and finish. The materials of the interior of the CX-5 feel good in hand and are above what you'll typically find in a compact crossover. 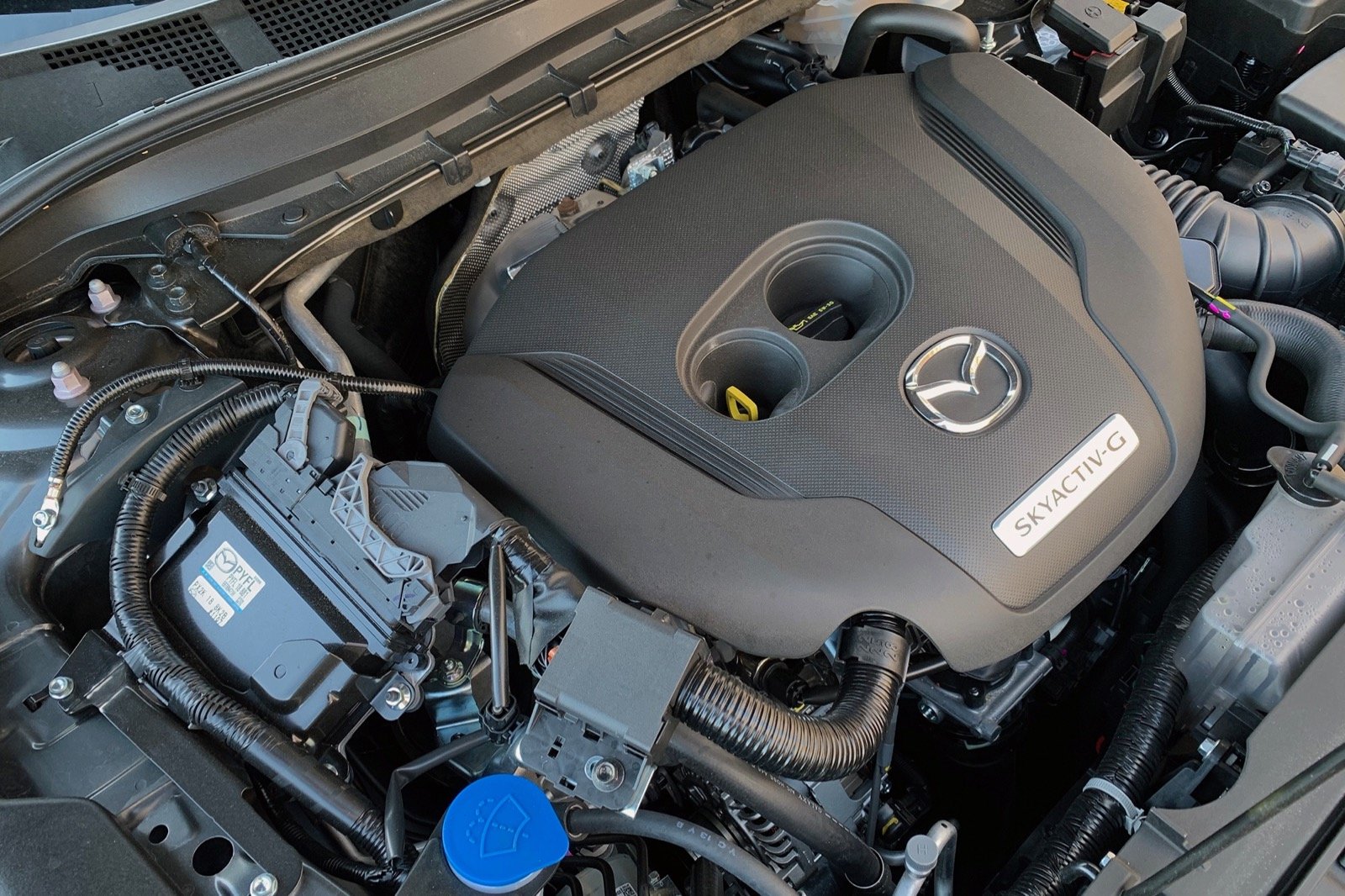 You can’t go wrong with either of the two engine options in the 2021 CX-5, but one delivers more spirited performance. The CX-5 Sport has a naturally aspirated 2.5-liter four-cylinder engine under the hood that produces 187 horsepower and 186 pound-feet of torque no matter if there’s regular (87 octane) or premium (93 octane) fuel in the tank. A six-speed automatic transmission with manual shift and sport models completes the powertrain. Front-wheel drive (FWD) is standard and all-wheel drive (AWD) is available.

The CX-5 Touring also has the base engine. Buyers who choose the Carbon Edition model get to choose between the 2.5-liter unit and a 250-hp, turbocharged 2.5-liter four-cylinder that delivers a robust 320 lb-ft of torque on regular fuel. A six-speed automatic transmission is also paired with this engine.

Powering the CX-5 Grand Touring Reserve and Signature trim level models is the turbo-four. AWD is standard on these models. FWD is unavailable.

The turbo engine delivers plenty of power that combines with the CX-5’s signature engaging driving style to deliver a properly fun time behind the wheel, when in Sport mode. In the normal drive mode, the engine is best over 45 mph and steering begs to be firmed up. But, push the car on winding roads and you’ll wish that its seats had better bolstering, even as the AWD keeps it firmly planted to the ground.

One very noticeable side effect of the Mazda’s sporty drive style is the SUV’s stiff suspension. It’s one place where mass-market and premium brands have an advantage over the Mazda. The driving experience can be fun, but the Mazda CX-5's little brother, the CX-30, is far sportier and agile on the road, especially the model equipped with the same turbo-four that is in the CX-5. 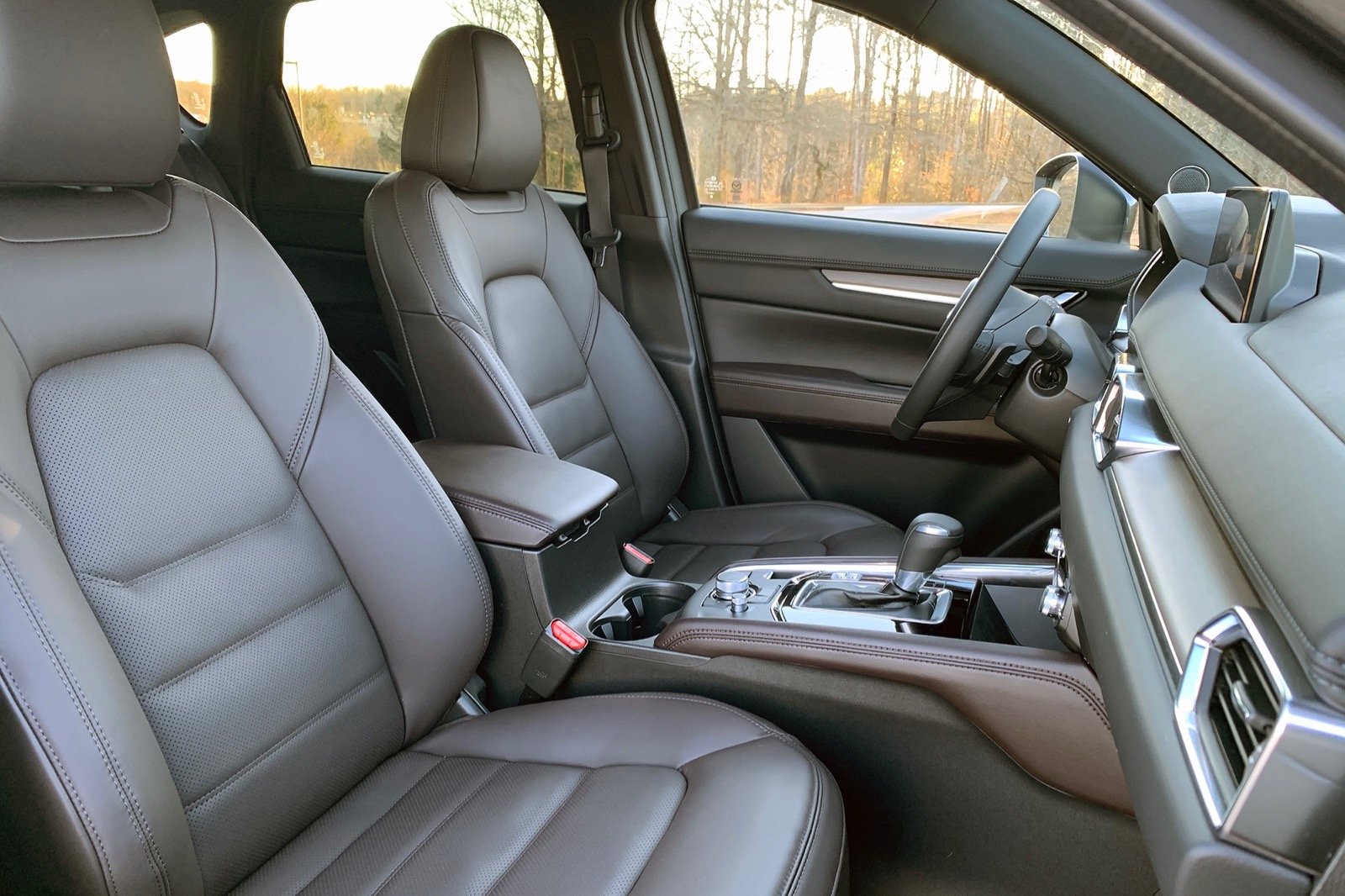 The Mazda CX-5’s design execution allows it to fulfill most of the functions families want to use it for in comfort and style, and with ease.

The seating position, distance to the center stack from the front row, and comfort level of the seats are all typical of an SUV of the CX-5’s size. Headroom is good in both rows but legroom suffers for back seat passengers, especially if someone on the taller end is sitting up in the front seats.

Like most SUVs of its size, the Mazda CX-5 has two full LATCH connections on the rear outboard seats and a tether connector on the middle rear seat. They’re not the easiest to use, but get the job done.

Mazda wins points for having straightforward, easy-to-use climate controls. They’re not super high-tech and pretty status quo for the company’s lineup, but when it works so well, there’s no point in changing it up.

A larger shifter at the center of the car takes up a fair amount of passenger space. Though this traditionally wouldn’t be an issue, the most modern compact SUVs have switched to push-button, dial, and small movable electronic shifters that take up less space.

Behind the shifter are Mazda’s infotainment system controls. Because of their position, for shorter drivers, the controls aren’t in the easiest or most intuitive position.

Compact SUVs tend to have more cargo space than you’d think based on their exterior dimensions. The CX-5 is an exception. Behind the second row, you'll find 30.9 cubic feet of cargo space. With the rear seats folded, owners have access to 59.6 cubic feet of storage in the cargo area. Those numbers are below average for the segment. The Subaru Forester has nearly 20 cubic feet more space, as does the Toyota RAV4, while the Nissan Rogue and Honda CR0V have even more. A power liftgate is available. 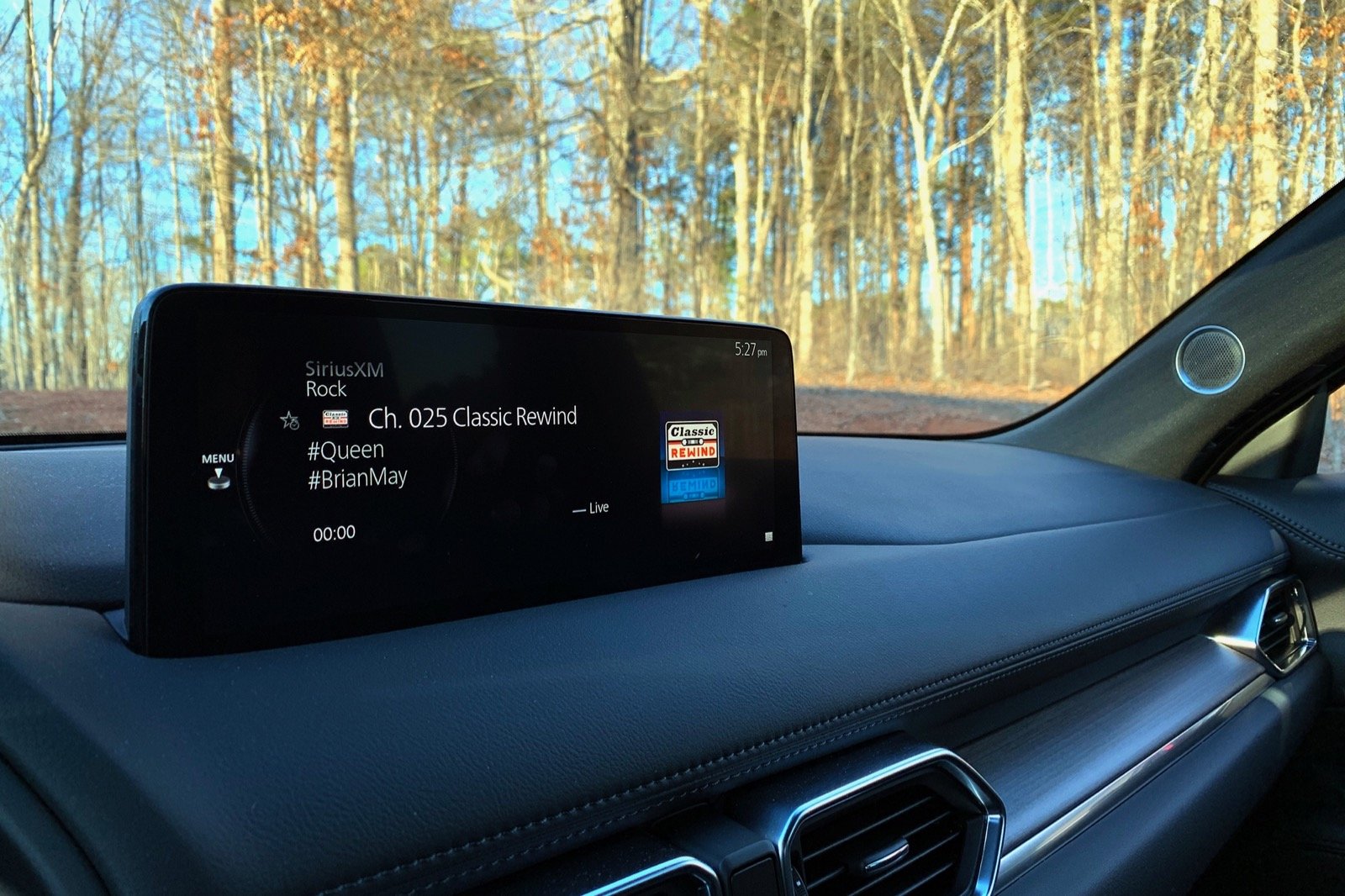 Every Mazda CX-5 comes standard with a 10.25-inch infotainment touch screen. The size is marvelous; Mazda’s operating system is not. While it certainly has its high points—it’s generally uncluttered looking—the information presented on the screen is not in keeping with modern design, cheapening a vehicle that is generally high-class for its price point and proves troublesome to use via the knob in the center console.

There are no knobs for quickly and easily tuning the stereo or scrolling through favorites, though the volume can be easily brought up and down via a switch on the steering wheel or a knob in the center console. Some of this functionality can occur via the touch screen, but its positioning makes it a stretch for a driver or front passenger to reach.

It helps that Apple CarPlay and Android Auto come standard, so you can just use your phone and the steering wheel controls to switch between songs on your playlist. Still, a workaround to be entertained should not be required. 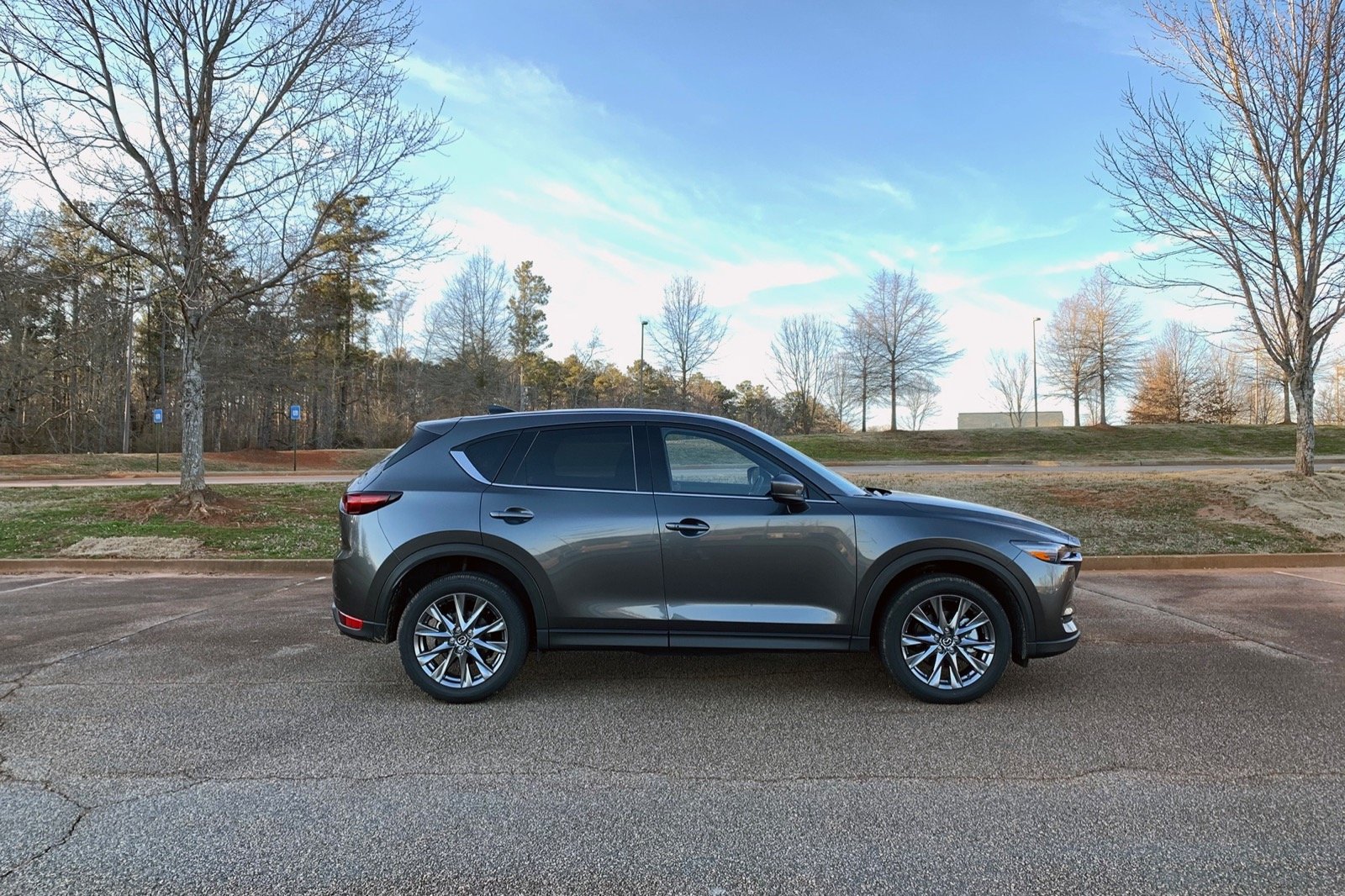 Those features have helped the SUV earn high safety ratings. The 2021 Mazda CX-5 has been named a Top Safety Pick+ by the Insurance Institute for Highway Safety (IIHS), a rating achieved by 49 vehicles this year. It received all Good scores in its crash tests but buyers who want the best headlights available on the model should plan to upgrade to the adaptive lighting system.

The National Highway Traffic Safety Administration (NHTSA) has given the SUV similar accolades, labeling it a five-star vehicle.

Mazda backs every new CX-5 with a three-year/36,000-mile basic warranty and a five-year/60,000-mile powertrain warranty. 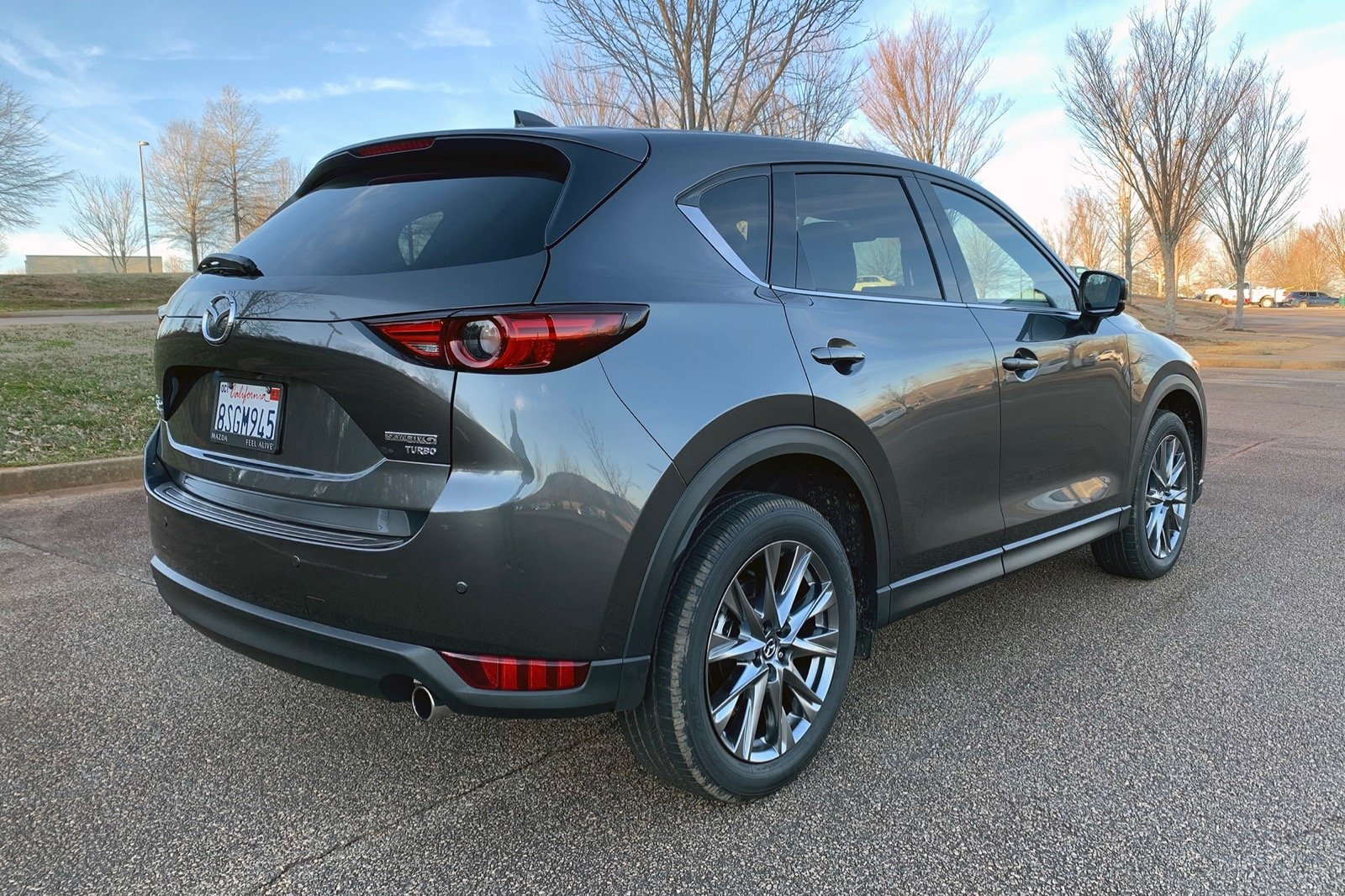 The CX-5’s competition offers some advantages over the Mazda. On the cheaper end, buyers can opt for the Kia Sportage over the Mazda CX-5, but it has far fewer standard features than the Mazda. The similarly priced Chevrolet Equinox has better predicted reliability. Subaru gives the Forester standard all-wheel drive. Getting the Jeep Cherokee will give you a model with outstanding off-road prowess.

What Mazda lacks is a hybrid option. Rivals including the Honda CR-V, Ford Escape, and Toyota RAV4 all offer hybrid variants that are listed within the Mazda’s price range. However, those models are built for efficiency so they’re not as nicely appointed as the Mazda.

In its Signature grade, the CX-5 is most matched up against the Nissan Rogue. The Rogue’s infotainment and safety systems are much more modern, its ride quality is better, and there’s a unique two-tone paint job option.

As it ages, the CX-5 is facing increased competition from new guns including the Hyundai Tucson and Mitsubishi Outlander, both of which are new for the 2022 model year, and the Ford Bronco Sport, which is new for 2021. A fresh Volkswagen Tiguan is also on the way to the States.

Paul Hopefully it will arrive at the dealership; Taska Mazda RI tomorrow. I'll give review at a later date.

Enter your zip to see incentives for a new CX-5 in your area.

I recently purchases a 2021 Mazda cx5 signature. The buttons on the left hand side of steering wheel are supposed to operate the radio. 2 are for volume and the other two i was told by salesman when...