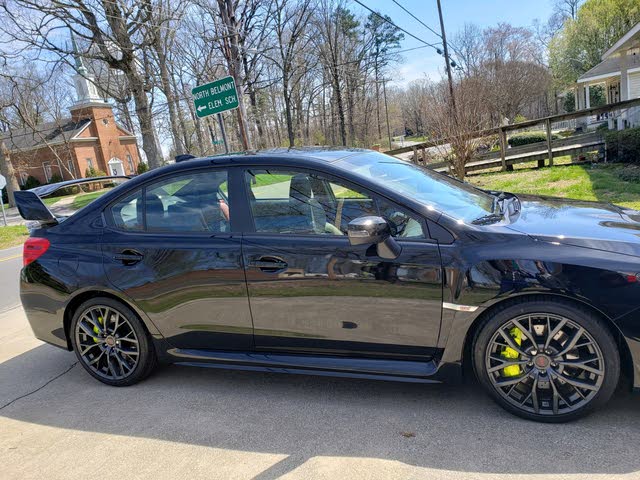 The WRX became a tuner favorite as soon as it was released, but it took a few years for Subaru to give us its own ready-made hardcore version of the all-wheel drive rally-bred sedan. Dubbed the STI after Subaru’s racing division, the car is better than the standard WRX in just about every way, from more power and suspension upgrades to a nicer interior. For 2019, the WRX range is still based on the fifth generation Impreza that was introduced for 2017, and there are few changes. The biggest is the introduction of the “Series.Gray” special edition model for 2019. Just 250 examples on the WRX STI platform will be built, compared to 750 examples for the standard WRX range. The package offers Cool Gray Khaki paint, black badges and mirrors, 19-inch alloy wheels with black finish, silver Brembo brake calipers, Ultrasuede and leather seats, and red stitching on the Ultrasuede steering wheel. Underneath, the WRX STI Series.Gray gets an exclusive Bilstein suspension.

The standard WRX has a turbocharged 2.0-liter boxer 4-cylinder. The STI setup is similar, but with more power. Displacement is up to 2.5 liters and horsepower is a total of 310— five more than buyers got in 2018. In this day and age, 310 horses may not seem like a lot, but all-wheel drive makes this a surprisingly quick car off the line and 0-to-60 miles per hour comes in the low 5-second range. Top speed is about 160 miles per hour.

In addition to the extra power, the STI is also more focused on handling. It features a driver-controlled rear limited slip differential and a hydraulic steering rack instead of the electric one in the standard car. And, while the STI may be a 4-cylinder car, it’s also a high-performance one with a large turbocharger, all-wheel drive (AWD), and plenty of weight. As a result, fuel economy takes a hit. Fitted with the 6-speed manual gearbox—the only choice available for the STI—the car will manage just 19 mpg city, 22 highway, and 17 combined.

Subaru’s EyeSight active safety system isn’t available on the STI, but the Insurance Institute for Highway Safety (IIHS) has given the WRX its highest Top Safety Pick+ status, and the impressive traction and handling of the STI should help drivers in accident avoidance.

The 2019 Subaru WRX STI offers tons of performance per dollar. It’s equally at home on the track as it is on snow-covered roads. Subaru’s impressive record of reliability and build quality add to the allure of the 2019 WRX STI.

Have you driven a 2019 Subaru WRX STI?
Rank This Car