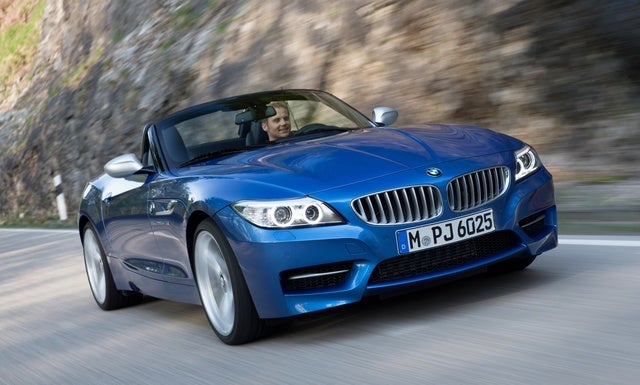 The BMW Z4 was first introduced at the Paris Motor Show in 2002 as the Bavarian carmaker’s replacement for its previous rear-drive, two-seater convertible offering: the Z3. The Z4 was welcomed as a more competent performer than the Z3 and has been a popular choice in the convertible sports car category ever since. It has, in fact, only seen two generations in almost 15 years of production, the second of which (with retractable hard top roof) came out in 2009. Over 100,000 Z4s have been sold in total. 2016 will likely be the last of the second generation Z4 (internally known as the E89), before it is replaced by an all-new third generation model.

Rumors and tidbits of legitimate information have been circling for months around BMW’s collaboration with Toyota on an upcoming Supra sports car. Details are still murky at best, but BMW will sell a version of the Toyota/BMW as the Z4, and both it and the Toyota will likely be powered by a plug-in hybrid drivetrain. That car is still in development, so for 2016 the Z4 will remain an E89, and its final year is as much a stopgap model as anything. As such, the 2016 BMW Z4 is largely the same as the year before, and even the prices remain the same.

There are, however, a few cosmetic changes to note, showing that BMW hasn’t completely forgotten about the E89 until the new Z4 is finally ready. Probably the most exciting new change is the availability of Estoril Blue paint for the Z4. One of BMWs very best shades, it’s been shining on M3s for years but has been absent from many other models in BMW’s range (including the Z4) until now. Crimson Red is also no longer an available color, and sports seats are now standard on all models.

The BMW Z4 is still available in three trims. sDrive28i is equipped with a 2.0-liter, 4-cylinder engine with a single turbocharger that makes 241 hp and 258 lb-ft of torque. Like all Z4s, it is available with either a 6-speed manual or a 7-speed automatic transmission. 0-60 for this 3,086 pound car comes in 5.5 seconds. Next up is the sDrive35i, which adds 18’’ alloy wheels (up from the 28i’s 17’’) and a 3.0-liter twin-turbo straight-6 with an even 300 hp and 300 lb-ft of torque. 0-60 comes at 5.0 seconds despite the car weighing 300 lb more than the 28i. Third up in the Z4 range is the sDrive35is. It adds Adaptive M Sport suspension, a rear bumper insert with a diffuser panel, special floor mats, sports exhaust, tighter steering, and a better audio system. It has the same twin-turbo 6-cylinder as the regular 35i, but power is boosted to 335 hp and 332 lb-ft of torque. 0-60 correspondingly drops to 4.6 seconds. Like pretty much all German cars, all versions of the Z4 have the same electronically limited top speed of 155 mph. The base sDrive28i will manage 22 mpg city/34 mpg highway (33 with the automatic), while the sDrive35i and sDrive 35is will both do 17/24.

Although the Z4 is a sports car, it’s also a BMW, so there are plenty of amenities. This includes the power retractable hardtop roof that, while not exactly sporting, does make the car more livable and folds all by itself in 19 seconds. As for the interior, it features memory seat adjustment, a heated steering wheel, a wind deflector to reduce noise when the top is down, dual zone climate control, a heated rear window, a rain sensor with automatic headlight activation, and all of the multimedia and infotainment familiar to anyone who’s been in a BMW recently.

One difference from the rest of the BMW range is that instead of pressing a ribbed section on the door handle to lock the car, on the Z4 you press an area below the key insert. A big interior package in 2016 worth nothing is the Ivory White Burnt Sienna package, which adds an anthracite headliner, white and black Nappa leather upholstery and wood trim. One doesn’t typically buy a two-seater for safety features, but the Z4 is a solid car with more than enough electronic aids looking out for you, including cornering brake control, brake assist, dynamic brake control, hill-start assist (35i and 35is only) and the rollover protection system.

The next Z4 will be a radically different car, so 2016 is important for this second generation as the last car that can trace its roots back to the original design in 2002. It’s not going out with a bang, but it still remains a neat, attractive, and fun offering in the sports car segment.

Stephen My favorite all season sports car. The Z4si is the winner. The Z4sis is a good choice while under warranty but a waste of money in the long term.For $800 you can tune the Z43.5si to 390 HP way above the 335HP Z4sis. This brings the 0-60 times to the mid to low 4's. With the hard top, heated seats and steering wheel and winter performance tires the car is great in the winter. I change to summer tires Easter. Car looks great all year round with its Italian designed exterior & interior. While not as nimble as the Boxster S, it is a highway beast with no wind noise like a soft top. I added a British SS exhaust and the sound is wonderful. My only complaint is that no one sells a larger intercooler to go to Cobb Stage 2. The DCT Tranny is amazing though. It shifts about as quickly and smoothly. as a Porsche Boxster PDK. In sport mode it wails. It was a much better value then the a la carte Boxster S and not just a summer sports car. So few on the road I get so many thumbs ups while driving. Fun ride to say the least! The last of the breed! Only have 22K miles on my '09. May keep it until the seats wear out! Not 1 mechanical issue to date. My '07 BMW 335ci had several. Traded it for a manual Audi S5. I use the Audi in the snow as AWD.

Users ranked 2016 BMW Z4 against other cars which they drove/owned. Each ranking was based on 9 categories. Here is the summary of top rankings.

I purchased a used good condition bmw z4 2016. the underbelly of the front bumber has some scratches and scruffs. This is not visable as I said it is on the underbelly. What would be the best way t...