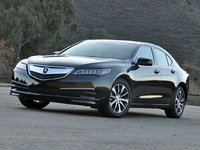 An urban Dr. Jekyll, the Acura TLX transforms into a wild Mr. Hyde when asked to perform. 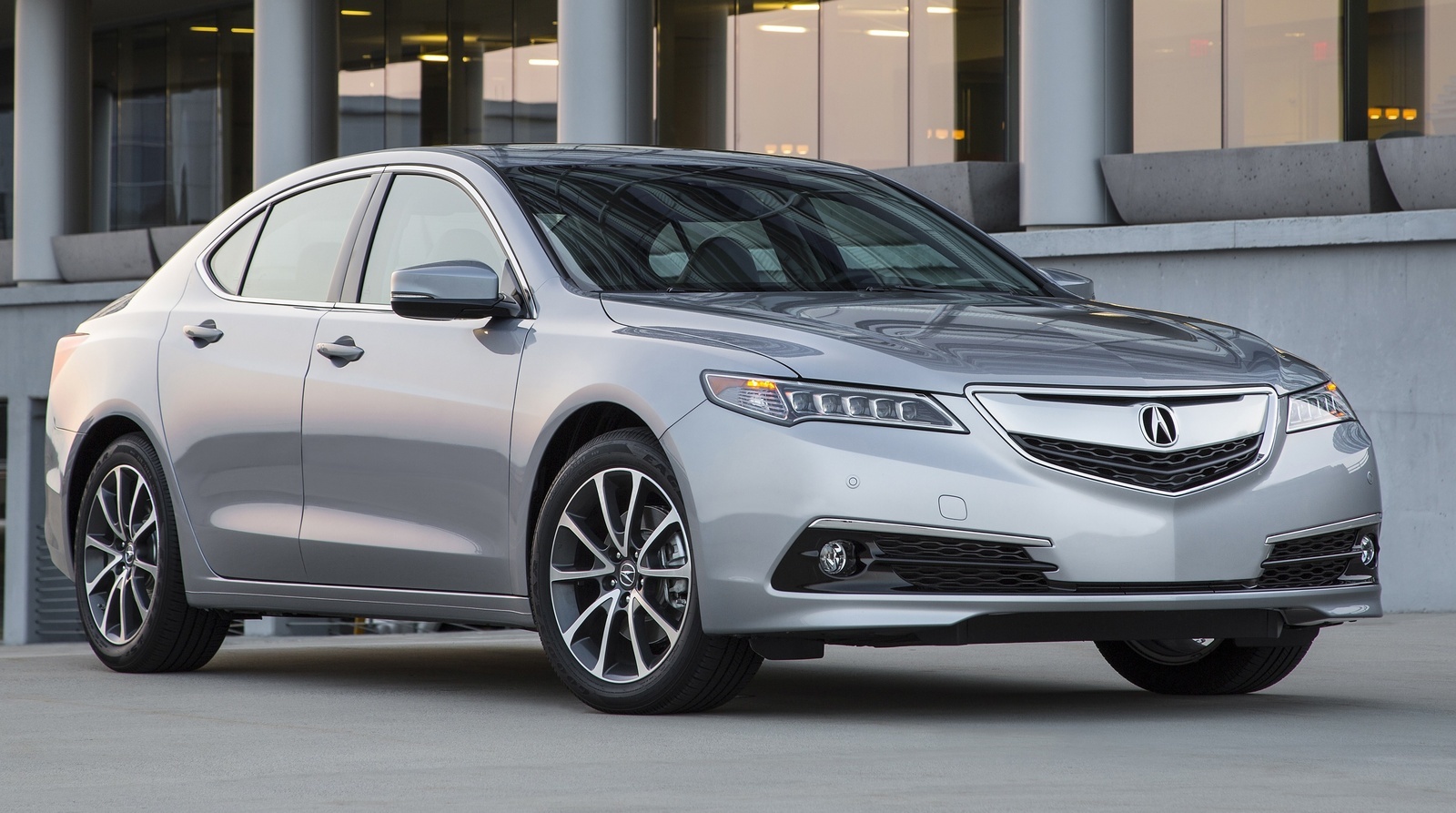 For 2015, Acura presents the TLX, a likable near-luxury sedan. Rewarding driving dynamics and a long list of modern entertainment and safety technologies help this Acura to credibly compete with more expensive premium sedans, especially since its price point is more appealing. But this car isn’t perfect. 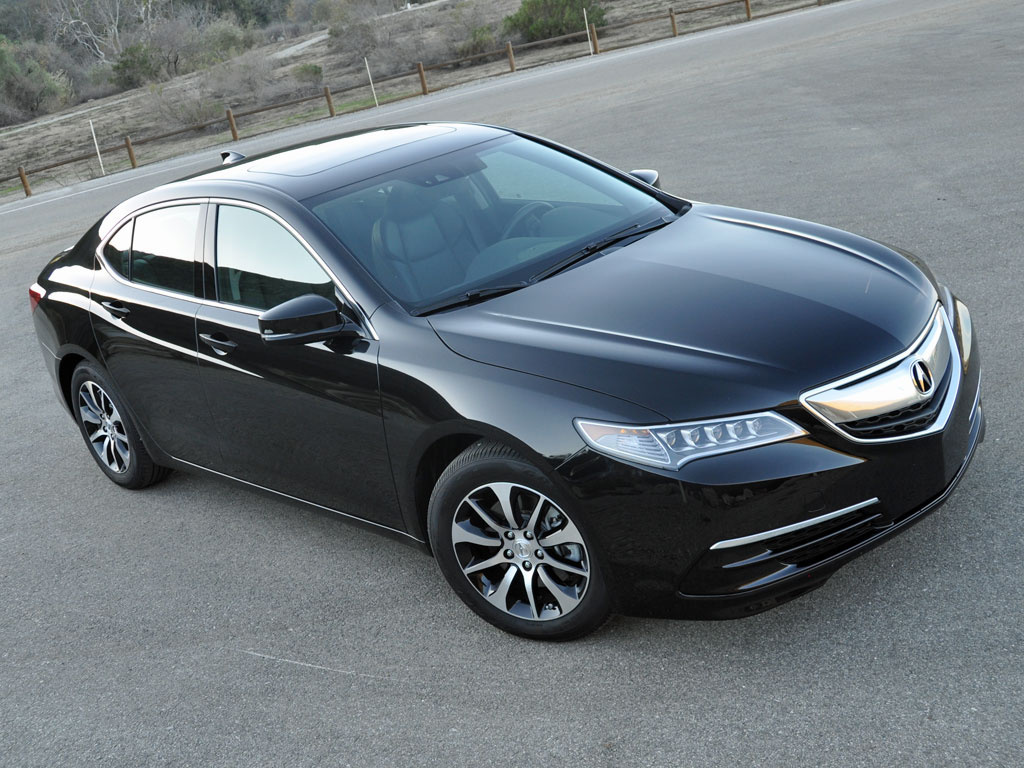 Some people believe that bad luck early in a new year portends good fortune for the rest of that year. If that’s the case, Acura can expect a prosperous 2015 for its brand-new TLX sedan. That’s because during the first few weeks and months after the car’s arrival at Acura dealerships, it has suffered problems with incorrect labels and misbehaving shifters. Those mistakes have even resulted in docked pay for Acura executives. Quelle horreur!

Good thing that the new 2015 Acura TLX is a likable car, an upscale sedan designed to replace both the TSX and the TL in the company’s lineup.

Acura offers the TLX in a single flavor, although you can choose to power it with a 4-cylinder or a V6 engine paired with front-wheel or all-wheel drive. Upgrades to equipment levels are available in the Technology and Advance option packages.

Order the Technology Package to get softer, perforated leather upholstery for the seats, a navigation system, a premium audio system, and next-generation AcuraLink connectivity and services. The Technology Package also includes rain-sensing wipers, a lane-departure warning and lane-keeping assist system, a blind-spot monitoring system with rear cross-traffic alert, and a forward-collision warning system.

The Advance Package is available with the optional V6 engine and installs front and rear parking sensors, remote engine start, LED puddle and fog lights, and auto-dimming side mirrors. An adaptive cruise control system is also a part of this package, along with road departure and forward-collision mitigation systems featuring automatic emergency braking capability.

My test vehicle for the week was a TLX 2.4 with the Technology Package, painted Crystal Black Pearl with Ebony leather. It cost $35,945, including a $920 destination charge.

With the TLX, Acura continues to press a reset button on the company’s controversial design language. The result certainly holds wider appeal, but at the same time it is blander than either of the cars it replaces. Plus, Acura’s hawkish front styling remains, punctuated by excessive front overhang. I’ll put it this way: I still miss the angular 2004–2008 TL.

Inside, my test car’s cabin was swathed in dark, premium leather, making the interior seem smaller than it was. Still, the TLX impresses with high-end materials and minimalist design, with just the right amount of brightwork and wood trim to liven this up. The TLX’s ambience is not as formal as the Audi A4 or Mercedes C-Class, but this car also costs a lot less. 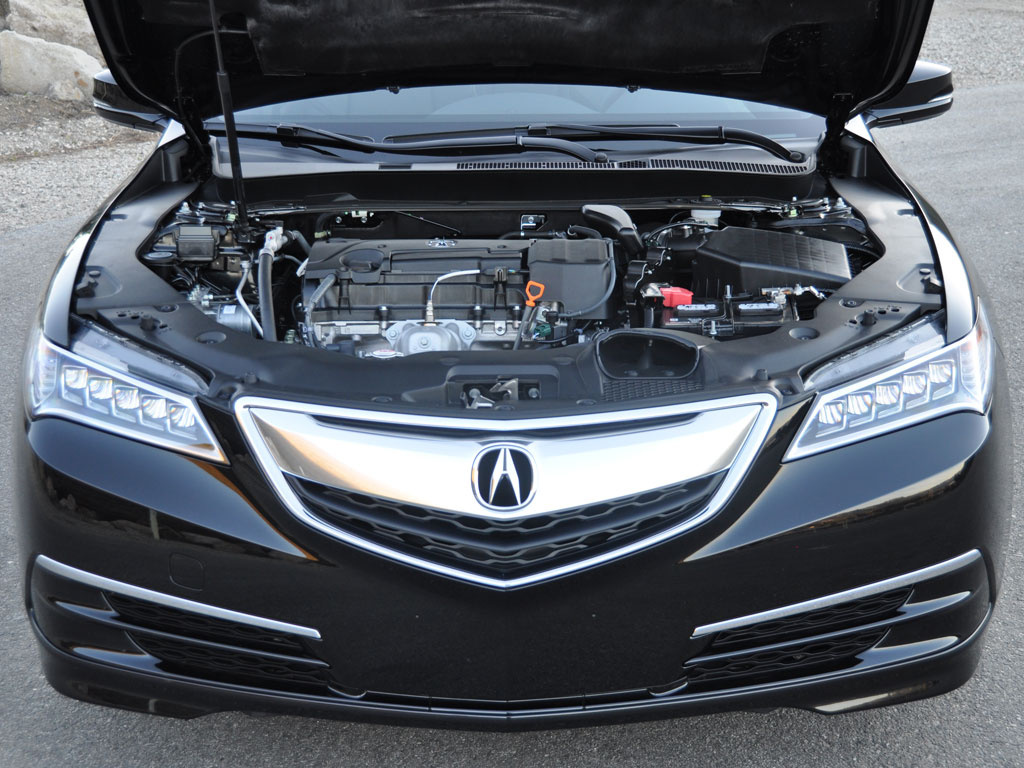 With the new TLX, Acura attempts to deliver a midsize luxury sedan that can be all things to all people. That’s why you can get a 4-cylinder or a V6 engine, front-wheel or all-wheel drive, and simple or complex levels of equipment.

My TLX 2.4 test vehicle landed on the more affordable and efficient end of the spectrum, equipped with a 2.4-liter 4-cylinder engine generating 206 hp. This is a refined engine boasting linear power delivery, and while it didn’t coax me to explore its rev limit, it delivered satisfying acceleration.

According to independent publications, the TLX 2.4 accelerates to 60 mph in about 7.5 seconds. If you’re Speedy McSpeederson, you might want to go with the TLX’s available 3.5-liter, 290-hp V6, which easily shaves a full second off that time.

Swinging back to discussion of the TLX 2.4, I can’t say that I’m a big fan of the 8-speed dual-clutch automated manual transmission in mine. These types of gearboxes tend to be jerky, and while Acura employs a torque converter to successfully smooth shifts, this transmission still gets a little bit confused when setting off from a stop and when driving in stop-and-go traffic.

It also helps that Acura supplies four different driving modes that configure the powertrain to specific preferences and conditions. Drive this car hard in Sport+ mode, and the standard paddle shifters deliver crisp gear changes and rev matching on downshifts.

Despite the occasional bouts of enthusiastic driving, fuel economy during my week behind the wheel proved commendable. The EPA estimates that a TLX 2.4 will get 28 mpg in combined driving, and that’s exactly what our test car returned over hundreds of miles of driving.

Furthermore, Acura successfully masks the TLX’s genuine sports sedan characteristics with a suspension that’s tuned to feel soft and absorbent around town and on the highway. When the time came to tackle a twisty road in the TLX, I questioned whether or not it could handle a canyon run.

As it turned out, I needn’t have worried. An urban Dr. Jekyll, the TLX transforms into a wild Mr. Hyde when asked to perform. The car delivers a clear connection to the road, feeling taut and athletic as it clings to corners.

Highlighting this Acura’s handling talents, the steering exhibits an ideal amount of heft and demonstrates precise response thanks to a standard Precision All-Wheel Steer (P-AWS, how cute) system. The P-AWS system adjusts rear-wheel toe angle independently of the front wheels, pivoting them up to 1.8 degrees in the same direction as the front wheels for a more responsive handling feel, or in the opposite direction to help the car carve a tighter line.

The result is that it is easy it is to place the TLX exactly where you want it and point it in the direction that you want to go. All that’s missing from the TLX 2.4 is a decent set of factory tires. 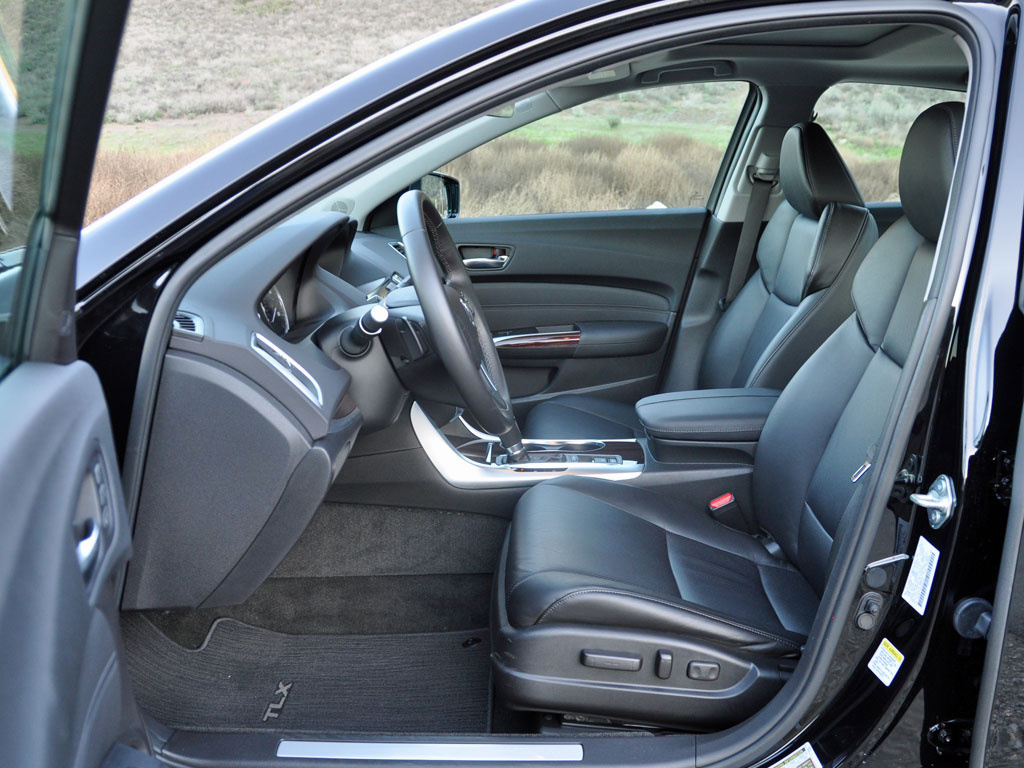 With few exceptions, the Acura TLX’s remarkably quiet cabin exudes quality in a clean aesthetic, with thoughtful touches to warm it up a notch.

The driver’s seat is quite comfortable with just the right amount of lateral bolstering, and visibility is clear and unobstructed. Front passengers may complain about the annoying lack of a seat-height adjuster, an omission that frequently represents a deal-breaker in my household.

Rear-seat accommodations feel a bit tight compared to the outgoing Acura TL, but there’s enough room for a 6-foot-tall man to be just comfortable enough to characterize the space as snug instead of torturous.

Pop the trunk lid to find a cargo area measuring 13.2 cubic feet. That’s not very big, but the cool storage bins under the trunk floor and on the sides of the trunk proved exceptionally useful.

As far as the control layout is concerned, I go into more detail about the TLX’s dual-screen infotainment system in the section that follows. Here, I’ll simply say that everything aside from the car’s infotainment and climate systems represents a model of clarity and simplicity. 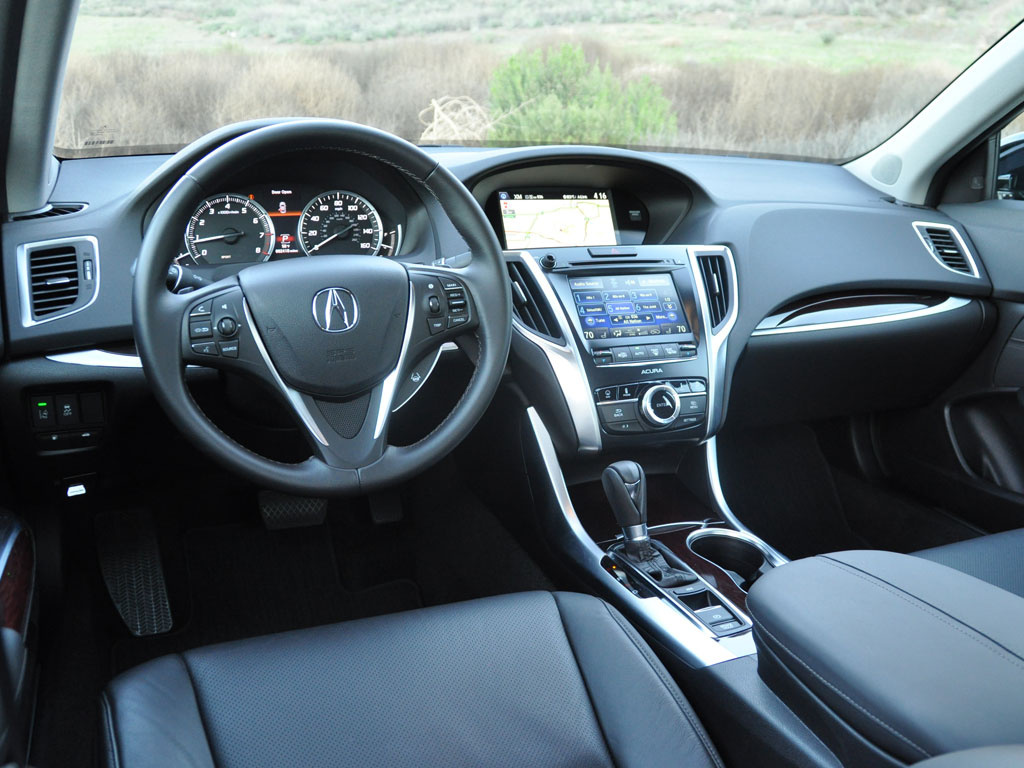 Even after a week of driving, I can’t say that the dual-screen setup is the easiest to use. A minimalistic approach to knobs and buttons results in more complex on-screen menus to wade through, and that results in more distraction while driving. It was, however, easy enough to pair a smartphone to the system, to make and receive calls, and to stream Internet radio.

Even the radio power button and volume knob don’t make sense. Acura designs the volume knob to be pushed in flush with the dashboard to create a smooth center-stack landscape. I kept pushing it in, thinking I was powering the radio off, and then getting frustrated while trying to figure out why the power-off button wasn’t working before remembering that the power-off button is next to the knob, not integrated with the knob.

Next-generation AcuraLink now offers a crash notification service that automatically contacts emergency responders if the TLX is involved in a collision. That’s a terrific addition to the car, one that really ought to be standard. Additionally, AcuraLink allows authorities to track the vehicle should it be stolen, and using a smartphone app TLX owners can also perform remote functions like locking or unlocking the car or even sounding the horn.

Additionally, though my week with the TLX took place during a bitingly cold Southern California cold snap, it was nice to know that the climate control system uses a solar sensor to measure the intensity of the sun’s rays, and also takes into account the position of the sun when determining how best to cool the car. 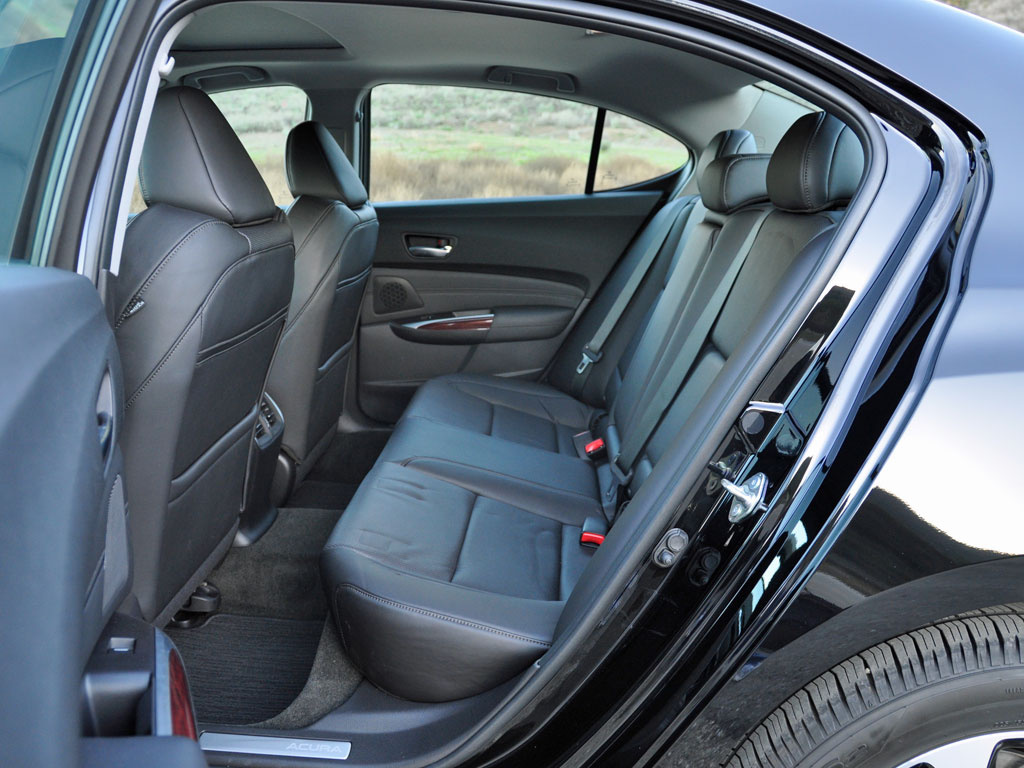 A multi-angle reversing camera is standard for all versions of this Acura, and when equipped with the optional Technology and Advance option packages, the TLX is loaded with safety features.

The Technology Package adds lane-departure warning, lane-keeping assist, blind-spot monitoring, rear cross-traffic alert, and forward-collision warning systems to the car. That’s pretty much everything you need to avoid a collision.

Just in case these features don’t do the trick, the Advance Package installs road-departure and collision-mitigation braking technology. If the warning systems determine that you’re ignoring them, for whatever reason, these additional technologies will autonomously apply the brakes to do their best to minimize or avoid an accident.

On a side note, can I say that I much prefer the traditional blind-spot monitoring system Acura installs in the TLX to the distracting and strange LaneWatch technology that Acura’s parent company, Honda, offers in vehicles such as the Accord? Acura’s approach is superior, though I do wish the visual warning indicators were right on the mirror glass instead of on the trim near the base of the windshield pillars.

As far as crash protection goes, the Insurance Institute for Highway Safety (IIHS) gives the TLX its Top Safety Pick rating and, when equipped with the Advance Package, a Superior front crash-prevention rating. 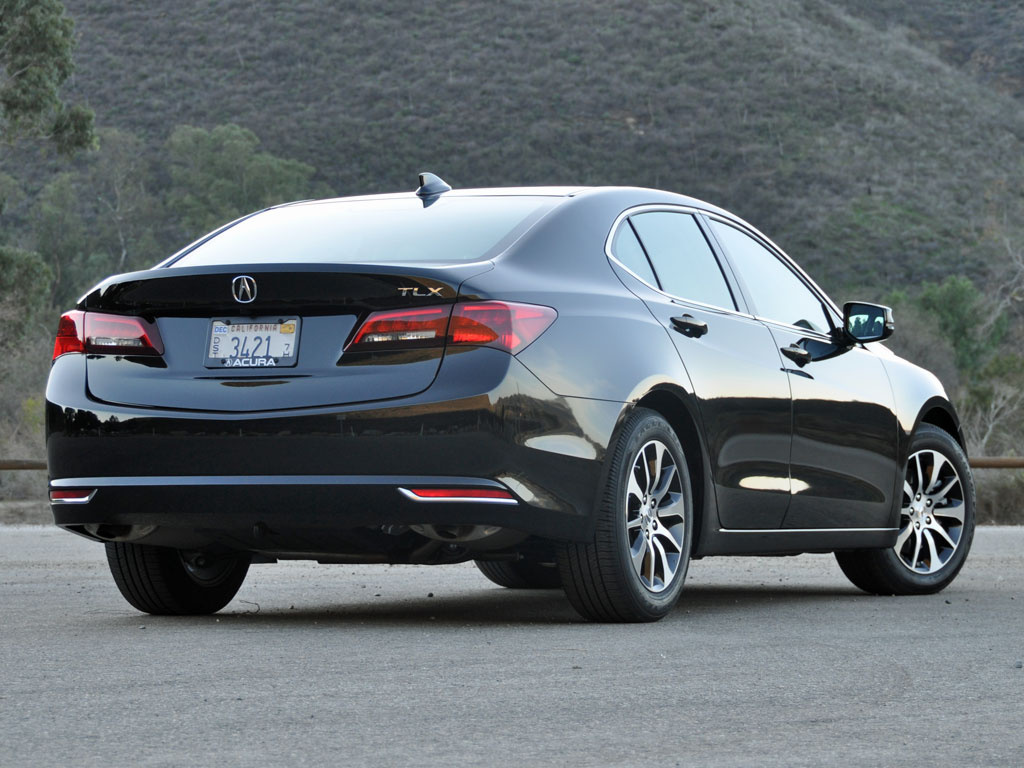 Because the TLX is a new Acura nameplate, predictions for how it will fare in terms of dependability, value retention, and ownership costs are difficult to source. However, Acura does have an established track record with the preceding TL and TSX models, and it's fair to assume that the TLX will deliver commensurate performance in various areas.

Historically, when it comes to quality and reliability, Consumer Reports and J.D. Power have glowed with praise for the TL and TSX. Acura has stumbled a bit out of the gate with the new TLX, though, issuing a recall for the push-button automatic transmission that comes with the V6 engine. Still, we expect this Acura to serve its owners well over the long haul.

Acura’s warranty and roadside assistance programs are competitive, but nothing to get excited about. Likewise, based on historical ratings for the Acura ILX, TSX, and TL models, owners should expect average depreciation over time.

Good thing there's inherent value in the sticker price. In many respects, and in comparison to other luxury models at a similar price, it seems like you’re getting more for your money with the Acura TLX.

Dan I own a 07 Acura TL Type S. I test drove a new Acura TLX Advance last week. The interior styling and features are impressive. The exterior styling is NOT. If you drop 40 G Plus for an Acura it should stand out from its humble sister, EG; Honda Accord. I'm going to test drive a Lexus. At least they stand out from their sister the Camry. Acura stylist have dropped the ball since 08. We will see more Lexuses on the road, no doubt.

Have you driven a 2015 Acura TLX?
Rank This Car

How Tolist My Car For Sale

Replaced rear parking brake actuator after accidentally breaking it. Lights on dash now and it doesn't work on the side I changed. 2015 Acura tlx