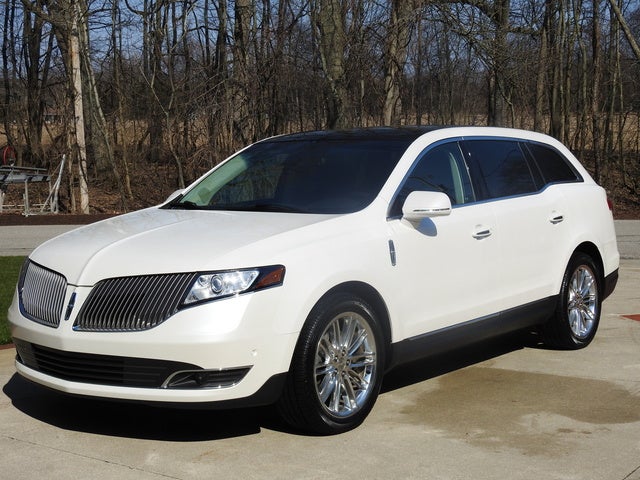 Ford takes a forceful step or two in a positive direction in a couple of key areas with the 2013 Lincoln MKT when it comes to competing in the luxury crossover market.

The MKT already offered an impressive ride and handling, and the 2013 version does nothing but up the ante in that regard. The vehicle also tends to score high marks for technological and overall enhancements in its cabin and safety gear.

The 2013 Lincoln MKT moves forward but a baby step on another front, however. Reviewers assessed the MKT’s exterior styling mostly as “unique” in recent years, with the thought that the car’s big and bold look was off-putting to some. The MKT gets a freshening for 2013 with a new grille and front fascia that tone down the brash appearance a bit and give the vehicle a wider and somewhat less vertical visage from the front. Whether the new look will appeal to a broader selection of buyers remains to be seen.

What most experts seem to agree on is that car buyers who get past the looks will find plenty to like in the 2013 Lincoln MKT, a 3-row vehicle that seats 6 or 7.

Upgrades for the 2013 Lincoln MKT include a more powerful engine in the standard trim that starts a few thousand dollars short of the $50,000 mark. The 3.7L's 3.7-liter V6 with twin independent variable camshaft timing gets a bump up to 300 hp, an increase of 32 ponies, with 275 lb-ft of torque. This setup rates 17 mpg city/25 highway for fuel mileage.

The second of the two trims, the 2013 Lincoln MKT 3.5 Ecoboost V6 AWD, boasts 355 hp and 350 lb-ft of torque, mileage marks of 16/22 and all-wheel drive. The two trims utilize two versions of the 6-speed SelectShift automatic transmission, both of which include paddle shifters mounted on the steering wheel.

Sound-deadening materials have helped make the 2013 Lincoln MKT even more quiet than previous editions, and Ford has worked to improve the MKT’s handling and ride further by making an adaptive suspension and its related Lincoln Drive Control standard in the EcoBoost trim. Drivers choose between the base Normal setting; Sport, with its firmer damping and quicker throttle response; and Comfort, which softens the dampers and reduces steering effort.

The 2013 Lincoln MKT receives a freshening inside that includes new styling and materials. An updated instrument panel, refurbished Lincoln MyTouch system, wood trim and premium leather upholstery help boost the luxury quotient of the crossover. The MyTouch, experts say, is at least somewhat improved over the previous versions, which were too sensitive and at times difficult to use.

Lincoln loads the 2013 MKT with safety features, and the crossover scored well in Insurance Institute for Highway Safety crash tests. The 2013 Lincoln MKT comes standard with 6 airbags and an electronic traction and stability control system, and its antilock brakes are upgraded, too. The MyKey feature, which allows parents to restrict vehicle speed and audio volume for their young drivers, is also standard. High-tech systems that watch out for blind spots and alert the driver to lane changes are available, too.

dentonfender Best car we've tested for long distance driving - a true touring car. Quiet, powerful, roomy and exudes luxury. As for looks, you either love it for not looking like every other SUV/CUV crossover on the road.....or you despise the styling. Form follows function Probably the best bang for the buck on the used car market today.

dentonfender We wound up purchasing a 2013 MKT 3.5L EcoBoost and can't wait until the wife retires to start visiting every national park in the USA! Only the 2013 and 2014 model years came with the CCD (continuously controlled damping) also known as Adaptive Suspension. This is a must if looking for a long distance touring car. The EcoBoost engine comes with AWD and loads of options. You will want to make sure your car comes with the 201A Option package (as most do) as it contains the BLIS (Blind Spot Information System). The view out the back window is almost port hole small and the BLIS system comes in really handy due to the inherent blind spot.

Users ranked 2013 Lincoln MKT against other cars which they drove/owned. Each ranking was based on 9 categories. Here is the summary of top rankings.

Have you driven a 2013 Lincoln MKT?
Rank This Car

Noise And Vibration After 60 MPH

I have a new 2013 MKT with 2000 miles. Starting at 60 mph and up I get a cabin noise and vibration in the steering wheel and seats. The dealer has re balanced the tires and tell me it isn't the tire...

A couple days ago, while driving on the highway in my 2013 Lincoln MKT, i hear a sudden explosion from the top of the car. The sunroof towards the front of the car exploded . There were no vehicles...