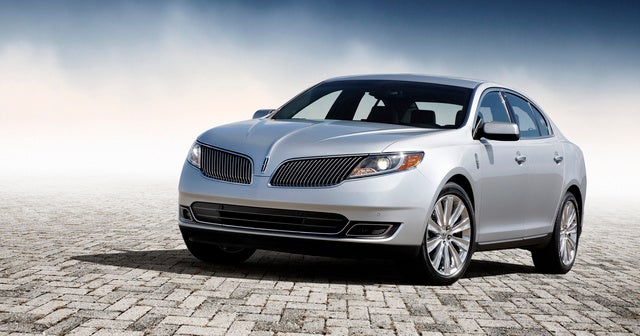 Lincoln, in the midst of a makeover of its complete line, has unveiled its flagship 2013 MKS model. Showing a nip and tuck here and there, along with a revamped grille, the MKS claims to be completely refreshed inside and out. While most of its design modifications are slight, the overall impression gives the car a new direction in style.

But is Lincoln going in the right direction? Judging from the chatter on the Internet, the answer would have to be, "No." The front fascia, long dominated by Lincoln’s classic “waterfall” grille, has been replaced by a pinstriped face that has been likened—in one of the kinder comments—to the mouth of a whale. HID headlights, LED tail lamps and a longer hood are also part of the new look, but nobody seems to notice.

The trim lineup includes the Base, with a 3.7-liter V6 with 300 hp and 280 lb-ft of torque, up from 274 and 275, respectively. Front-wheel drive and a 6-speed automatic transmission with wheel-mounted paddle shifters come standard, with intelligent AWD as an option. Also available is a 3.5-liter EcoBoost twin-turbo V6 engine with 365 hp and 350 lb-ft of torque, 6-speed automatic transmission with paddle shifters and AWD. The 3.7 gets an estimated 19 mpg city/28 hwy, while the EcoBoost is estimated at 17/25.

Inside, by contrast, is more muted and elegant, with comfortable organic leather and climate-controlled multi-contour seats in the front and premium wood accents. It’s the dash that’s striking—Lincoln has added two screens on either side of the large analog speedometer, which are customizable. The MyLincolnTouch system, in spite of an upgrade, still relies too much on touch-sensitive controls, notably for heating, that are still better served with a knob. Steering-wheel controls for many other functions have been placed higher, facilitating ease of use.

The drive itself has improved, thanks to modifications to the chassis. Lincoln calls it Continuously Controlled Damping, in which a complex series of sensors make adjustments up to 50 times per second. In addition, 3 drive modes are available at the push of a button—Normal, Comfort, and Sport—to further enhance your experience.

Safety features include front and side curtain airbags, electronic stability control and vented disc brakes. The Electronic Stability Control system has been enhanced with Curve Control, which applies 4-wheel braking if you are taking that offramp just a little too aggressively.

In spite of this, all anyone seems to be able to talk about is that grille. Whether all this commotion will attract or repel customers remains to be seen. The automotive world is rooting for Lincoln, but the knives are definitely out.

dorrissan I love mind; never thought about the grill until I read how people disliked it.

Users ranked 2013 Lincoln MKS against other cars which they drove/owned. Each ranking was based on 9 categories. Here is the summary of top rankings.

Have you driven a 2013 Lincoln MKS?
Rank This Car

No Power To My Lincoln Mks

No power and the car want crank. Good battery, change starter, and fuses are good

17 views with 3 answers (last answer about a month ago)

Where Is The Block Heater Cord On Lincoln 2013 MKS

Where is the block heater plug located

my horn does not work on column or by the fob

Bogs On Launch At Race Track

my lincoln mks 2013 AC changing temp from cool to hot by its own .pl help me.thnx