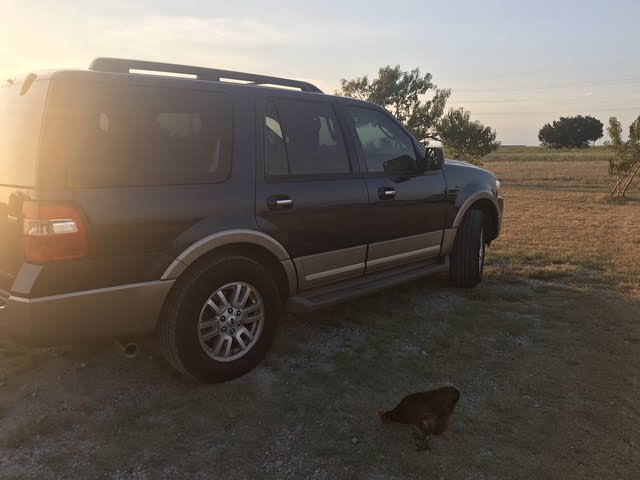 Average user score
5 ⁄ 5 stars
Based on 12 reviews
Review by Tommy — This vehicle has everything for which youd purchase a vehicle this size... and then some. Plenty of room, cargo space and wears well (my 2013 had 128,000 miles on it and it was in great condition, in... Read more
Great Family Car. by migration_chuckcloninger — Like the color, like the interior, good looking all around, very safe, very reliable and easy and fun to drive. It can haul with style everything 6 people need to take to the beach for the weekend. ... Read more
Review by Guru94PVLZ — Smooth ride and tight ,accurate steering,great view of the road. I dislike small vehicles Read more

The 2013 Ford Expedition, like several editions of the super-size 8-seat SUV before it, stands up well to the challenges of time. A throwback in some ways, the 2013 Expedition continues to thrive and impress and provide a nice ride and overall quality experience, despite not having received a whole lot of attention from the blue oval folks in recent years.

In the past, the Expedition, which is based on the F-150, has gotten tweaks when that popular pickup has received them. Not so much lately.

Reviewers note that the 2013 Expedition again seems somewhat neglected by Ford and is getting dated in assorted areas, including in design and features, but for the most part they still recommend it heartily, especially for those looking to get a little old-fashioned utility out of their utility vehicle.

Whether it’s towing work equipment or boats, snow machines or other toys, the 2013 Ford Expedition is up to the task and is likewise willing and able to carry a cast of characters to work with tools and play with toys. Unlike some SUVs, it has not morphed and edged toward becoming more “car-like.” When properly equipped, the 2013 Ford Expedition is rated at 9,200 pounds of towing capacity.

While some anticipated the 2013 Ford Expedition might be due to get a power upgrade, it retains its 5.4-liter V8, good for 310 horsepower and 365 lb-ft of torque. That setup works fine for most uses of the Expedition, reviewers feel, but a boost would be nice on the occasions the vehicle is asked to take on heavier loads. Fuel mileage rates at 14 mpg city/20 highway.

The 2013 Ford Expedition comes with rear-wheel drive (RWD) and is set up with a responsive 6-speed automatic transmission. Four-wheel drive (4WD) is optional. An effective suspension coupled with light and precise steering help keep the 2013 Ford Expedition easy to handle and drive, experts say. The ride, they feel, may not match that offered by crossovers, but it at least holds its own and likely betters that of other SUVs that share its body-on-frame style.

The cabin of the 2013 Ford Expedition fits the mold of the rest of the SUV. It features plenty of space for both cargo and people, which is a major plus in those departments. But it too comes up shy in features and is in need of updates of both content and style.

Among the positives are captain’s seats up front that are situated so as to give the driver, no matter his or her size, a good view of what’s ahead. Power adjustable pedals are a nice touch as well and enable the 2013 Ford Expedition to better accommodate drivers of various sizes.

Ford offers the 2013 Expedition in a wide range of trims and packages, running from the base XL through the XLT, to the Limited to the King Ranch. An extended length (EL) version is available and adds to the Expedition’s already impressive dimensions. Buyers with limited room in the garage or in their allotted parking space need to be aware of whether they can handle its 14 inches of added length, though.

A new dual-screen entertainment system is available in the Limited and King Ranch trims and is one of the additions for 2013. Another change for this year is that the heavy-duty trailer towing package now comes with a trailer-brake controller. The King Ranch version comes with an untreated leather interior that some reviewers love.

A leather-wrapped steering wheel, auto-dimming rear-view mirror, exterior keypad system, heated mirrors and 17-inch wheels are all standard on the 2013 Ford Expedition. Rain-sensing wipers, a power moonroof, 18 or 20-inch wheels, heated and cooled front seats, a power folding mechanism for the third-row seat, a navigation system and an entertainment system are all available.

The Ford Expedition has scored well in crash tests through the years. The 2013 Ford Expedition has front-seat side-impact airbags, side curtain airbags, 4-wheel antilock disc brakes and an electronic stability system with anti-rollover technology. Ford’s MyKey setup allows parents to restrict the Expedition’s top speed and add a seat-belt reminder as well as to implement other controls.

What's your take on the 2013 Ford Expedition?

Have you driven a 2013 Ford Expedition?
Rank This Car

My 2013 for expedition is possesed!!! Lol While driving it will drop in to first gear. Rev really high. I have to pull over and put it in p to fix it. Also the speedo will drop to 0 and stay there w...

2013 Expedition Quits When Hot Out

Any ideas why vehicle quits periodically when stopped when it's hot out, no rough idle, just quits, then goes thru diagnose on dash, but won't turn over or start till allowed to "sit" for a while, o...

How Do I Give A Dealer A Great Review?? Had The Best Buying Experience Ever...