The fourth-generation Subaru Impreza debuts for 2012 with a restyled exterior, a roomier cabin and a new 4-cylinder powerplant, which improves fuel efficiency without a loss in performance, thanks in part to a new Continuously Variable Transmission (CVT).

The 2012 Impreza fails to lead its class in any category, including performance and fuel economy numbers, and some owners find the seats uncomfortable.

While a few new owners have dinged the Impreza on issues such as fuel economy and seat comfort, an overwhelming number are pleased with their purchases, pointing out that standard AWD, a solid build quality, good performance and a comfortable interior made the 2012 Impreza the right choice for them. In the end, it all comes down to a matter of opinion and preferences, but the new Impreza is worth a test-drive and should definitely be on the short list for any prospective buyer seeking a stable, functional and reliable small car.

Perhaps feeling the pressure of an extremely competitive small-car market segment, Subaru launches a redesigned Impreza compact car a year earlier than expected, which ultimately translates into a boon for car buyers seeking a fuel-efficient, comfortable and stable vehicle. The Impreza's new 4-cylinder powerplant delivers the highest fuel economy of any all-wheel-drive car sold in the U.S., posting a 36-percent improvement in fuel economy over the previous engine, according to the automaker. Other feature highlights of the new fourth-generation Impreza include improved handling, a roomier cabin and upgraded interior materials and infotainment technology, as well as a new 4-cylinder engine.

Outside, the 2012 Impreza displays a freshened exterior design, with a number of styling cues borrowed from its big brother, the Subaru Legacy. New design elements include a hexagonal grille, upswept highlights, redesigned side mirrors and dramatically arched wheel wells. In addition, to improve driver visibility and interior space, Subaru moved the bottom of the Impreza's A-pillar forward by nearly 8 inches, resulting in a more dramatically raked windshield. The updates give the Impreza a sportier look, with an attractive nose and sweeping lines, though some reviewers find the redesign a little too sedate.

Subaru offers the 2012 Impreza in 4-door sedan and 5-door hatchback body styles, at Base, Premium, Sport Premium, Limited and Sport Limited trim levels, as well as performance-oriented WRX and WRX STI trims. The Limited, Sport Premium and Sport Limited trims come equipped with such exterior features as fog lights and heated side mirrors, while the Limited and Sport Limited trims also get auto on/off headlights. Sport-oriented WRX trims receive a number of exterior features not found on other Impreza trims, including a hood scoop, side air vents and a rear spoiler. In addition, WRX trims ride on a sport-tuned suspension. Power for the WRX comes from a unique turbocharged 4-cylinder engine.

The new Impreza sits on a slightly longer wheelbase, measuring 104.1 inches, up from 103.2 inches the previous year. However, overall length and width remain the same. The longer wheelbase, as well as the more steeply raked windshield and revised door panels and roof trim, result in improved hip and shoulder room inside the cabin, as well as an increase of nearly 2 inches in rear-seat legroom. Cargo space increases as well.

Competitors for the 2012 Subaru Impreza include the Ford Focus, the Hyundai Elantra, the Honda Civic, the Nissan Sentra and the Mazda3. While the Impreza doesn't boast the best fuel economy, handling or styling in its class, it comes standard with the automaker's Symmetrical All-Wheel Drive system, which helps to set it apart from more traditional front-wheel-drive vehicles. And as mentioned earlier, among 4WD vehicles, the Impreza reigns supreme in fuel economy. 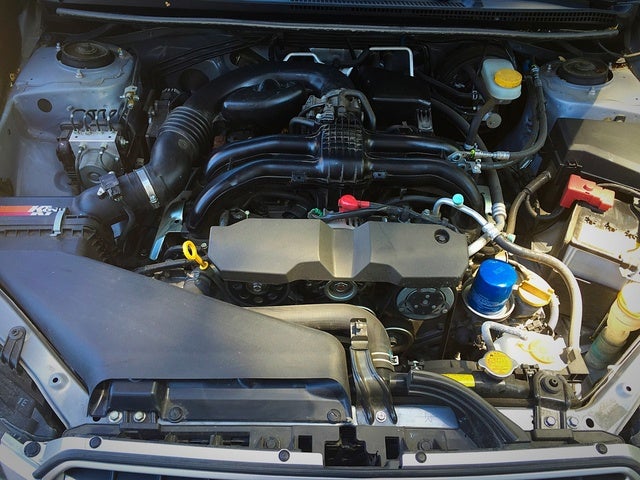 The 2012 Impreza receives a new 2.0-liter, 4-cylinder Boxer engine, in which the pistons move side-to-side horizontally, rather than vertically or in upright V-shaped angles, as they do in typical inline-4 and V6 powerplants. This provides better balance and less vibration, according to the automaker. In addition, because of the efficiency of the design, fewer parts are required, minimizing weight and repair costs. The Boxer engine also sits a little lower in the chassis, which helps to keep the vehicle's center of gravity low, improving handling and stability.

Smaller than the 2.5-liter engine it replaces, the new 2.0-liter powerplant produces 148 hp and 145 lb-ft of torque. That's a rather significant drop from the previous engine's numbers of 170 hp and 170 lb-ft of torque. However, Subaru says the engine feels more responsive than its predecessor, since the automaker was able to shave about 165 pounds off the vehicle's overall weight. As a result, the smaller engine does an adequate job of moving the Impreza along, though some reviewers note that it doesn't match the performance of powerplants found in some competitive vehicles, such as the Mazda3, and many note that the Impreza feels underpowered at times.

However, the benefits come on the fuel economy side, as the smaller 4-cylinder posts good fuel economy numbers of 27/36 mpg when paired with a new Lineartronic CVT transmission. Borrowed from the Legacy and Outback, the CVT smoothly and continuously adapts to performance needs, which helps improve overall efficiency. On Sport and Limited trims, the CVT also offers a 6-speed manual-shift mode, managed through steering-wheel-mounted paddle shifters. The Premium and Sport Premium trims come standard with a synchronized 5-speed manual transmission, although owners can opt for the CVT with the manual-shift mode. Fuel economy with the manual shifter drops slightly to 25/34 mpg on sedan trims and to 25/33 on hatchback trims.

A turbocharged 4-cylinder engine powers the performance-oriented WRX trims. On the base WRX, the engine puts out 265 hp and 244 lb-ft of torque, and links to a 5-speed manual transmission with Incline Start Assist. For the WRX STI, Subaru tweaks the engine, boosting output to 305 hp and torque to 290 lb-ft. The STI gets a close-ratio 6-speed manual, also with Incline Start Assist. Fuel economy numbers check in at 19/25 and 17/23 mpg, respectively. The WRX trims also include the Subaru Intelligent Drive (SI-Drive) system with three selectable driving modes. The turbocharged engine requires premium fuel.

All Imprezas come standard with Subaru's Symmetrical All-Wheel Drive system, which evenly distributes power and torque for optimal traction on all types of road surfaces.

The 2012 Impreza gets high marks for its smooth, comfortable ride and nimble handling, thanks in part to the vehicle's standard AWD system and low center of gravity, due to the placement of the Boxer engine. Reviewers report that the Impreza feels firmly planted and does a good job negotiating tight corners. While a few testers say they experienced some minor body roll, others report that they like the Impreza's sporty handling in corners.

The Impreza's 4-wheel independent suspension, which features MacPherson struts in the front and a redesigned double-wishbone configuration in the rear, feels refined and well-balanced, according to testers. In addition, with its longer wheelbase, the Impreza does a good job negotiating rough road surfaces, with minimal harshness communicated to passengers in the cabin. Subaru strengthened some suspension components for 2012 and borrowed some elements from the Legacy. The automaker also added new hydraulic engine mounts and rear ball bushings for an improved ride.

The accolades for the Impreza continue to its cabin, which Subaru redesigned for 2012. Thanks to changes made to the door panels, roof trim and front seats, as well as the wheelbase and the rake of the windshield, interior volume in the Impreza sedan increases to 96.9 cubic feet (97.5 in the hatchback), up from 94.6 cubic feet in the 2011 version. That makes the new Impreza the roomiest ever, according to the automaker. The redesigned seats are equally roomy and comfortable, with plenty of headroom and legroom for taller passengers. Drivers will find good visibility out the front and rear, enhanced by repositioned exterior side mirrors. Soft-touch surfaces and plenty of new interior storage spaces for 2012, including redesigned door pockets with bottle holders, add to the Impreza's comfort level and functionality.

The Impreza's list of standard features for 2012 includes remote keyless entry, a tilt/telescopic steering wheel, a 65/35-split fold-down rear seat, a multi-fuction display, an outside temperature gauge and power windows, door locks and side mirrors. The base package also includes a 6-way manually adjustable driver's seat, a 4-way manually adjustable passenger seat, cloth upholstery and a 4-speaker AM/FM audio system with a CD player. In addition, the Impreza comes equipped with a new ECO gauge, which aids drivers in operating the vehicle more economically.

Standard features for the WRX trims include automatic climate control, cloth upholstery and the 6-speaker audio system, while the STI trims receive Alcantara- and leather-trimmed upholstery.

The IISH named the Subaru Impreza a Top Safety Pick for 2012, thanks to its top rating of Good for protecting passengers during frontal, side-impact, rear and rollover crashes. The NHTSA gave the Impreza 5 out of 5 stars for protecting passengers during rollover crashes and 4 stars for front and side crashes, resulting in an overall rating of 4 out of 5 stars.

Owners are finding a lot to like about the 2012 Subaru Impreza. The redesigned exterior makes the Impreza stand out in a crowed, owners say, and the standard AWD system provides good stability and peace of mind. Although the Impreza looks like a small car, it offers plenty of interior space, with comfortable seats and a well-thought-out design, according to owners. The car rides and handles well, and most owners are impressed with the vehicle's fuel economy, though some say they're not getting the numbers they were promised. Many owners compare the Impreza favorably to competitors from Honda, Nissan and Toyota, and those who have made the switch to Subaru from another import automaker are pleased with their purchases.

Intrusive road noise and fuel economy numbers that don't compare with what some competitive vehicles offer are the two biggest complaints heard from owners. In addition, some say there's a numb spot in the steering at highway speeds, and others point out the lack of lumbar support for the driver's seat, resulting in uncomfortable seating positions. But overall owners give high marks to the Impreza's styling, performance, reliability and value.

What's your take on the 2012 Subaru Impreza?

Guru946TCV Car is fun, but the cost of replacing the CVT wipes out all of the benefits of the fuel savings

Users ranked 2012 Subaru Impreza against other cars which they drove/owned. Each ranking was based on 9 categories. Here is the summary of top rankings.

Have you driven a 2012 Subaru Impreza?
Rank This Car

2012 Impreza. My mom hardly drives it. It has 27000 miles on it. She got the warning from the dealer that she should change the timing belt due to age. It runs great. Do you think it should be ...

NewbieSubie asked a 2012 Subaru Impreza 2.0i Sport Limited Hatchback Maintenance & Repair question about a year ago

Just bought this car used, has about 98k miles. The check engine light and traction light are on steady. The cruise control is blinking and not functional. Plugged in the code reader and got P0455. I...

329 views with 3 answers (last answer about a year ago)

So, about a couple weeks ago I had check engine light (flashing), Cruise control (flashing), ABS (Solid) and Traction (solid) went to Autozone got codes I do remember P0700 and there where two other o...

Guru94NDTN asked a 2012 Subaru Impreza 2.0i Hatchback Maintenance & Repair question about a year ago

Humming sound while accelerating but not when stopped. Serious? I’m a new owner

16 views with 4 answers (last answer about a year ago)