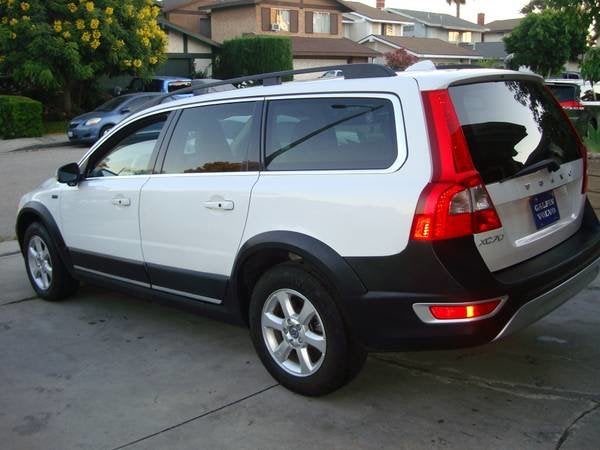 Average user score
5 ⁄ 5 stars
Based on 5 reviews
Review by Guru6CDT3 — i absolutly love this car, i love the features heated seats automatic windshield wipers, blue tooth for my phone and it is so clear sounding, i dont have anything to compare it to, its better than a e... Read more
Review by GuruGQKKF — Im just beginning my search so there are no comparisons to be made. Its a beautiful vehicle and if it was in my budget, I certainly would have been interested. Read more

The 2011 Volvo XC70 offers, as it has for years, a comfortable, roomy and safe ride in all types of weather conditions and over assorted road surfaces. This time around, it marks a changing of the guard, too.

Volvo has discontinued the V70, its standard-bearing wagon for years, and it’s up to the XC70 to carry on the manufacturer’s family-toting duties. The 2011 Volvo XC70 has its critics, to be sure, yet should be up to the task.

Some Volvo fans laud the XC70 as the best offering in the carmaker’s lineup. They like its ability to get off road a bit, but more importantly appreciate its dual role as a rig that can handle the challenge of snow and rough conditions and just as easily tackle a long road trip comfortably.

A 3.2 and turbocharged T6 continue to be the two trims offered in the 2011 Volvo XC70. Not a lot has changed from 2010 with the XC70, but with the V70 gone, front-wheel drive (FWD) has become standard for the 3.2 trim, though all-wheel drive (AWD) remains available.

Both the 3.2 and T6 have picked up a little boost in horsepower. A 3.2-liter, inline six-cylinder engine powers the 3.2 and pushes 240 horsepower and 236 lb-ft of torque. That setup rates at 18 mpg in the city and 25 on the highway. The T6 features AWD and gets a 3.0-liter, inline six-cylinder turbocharged engine with 300 hp and 325 lb-ft of torque and gas mileage of 17 city and 22 highway. Both trims come standard with a six-speed automatic transmission and are rated at 3,300 pounds for towing.

The 2011 Volvo XC70 draws rave reviews for its comfortable seats, cargo space, safety features, and build quality. It boasts 33.3 cubic feet of cargo space behind the rear seat, and with those seats down the number jumps to 72 cubic feet.

Some reviewers find the base engine in the 3.2 trim of the 2011 Volvo XC70 underpowered for the vehicle’s weight and, by comparison, are not impressed with the fuel mileage of the turbocharged version.

Volvo’s legendary reputation for safety trumps a bunch of other issues for many buyers. How many parents through the decades have passed the family Volvo wagon down to be used as their teenager’s first car or scoured the newspaper’s classified ads – remember those? – looking for a boxy Volvo beater? The 2011 Volvo XC70 carries on the tradition with its standard traction and stability control, four-wheel ABS, full array of airbags, and other safety features.