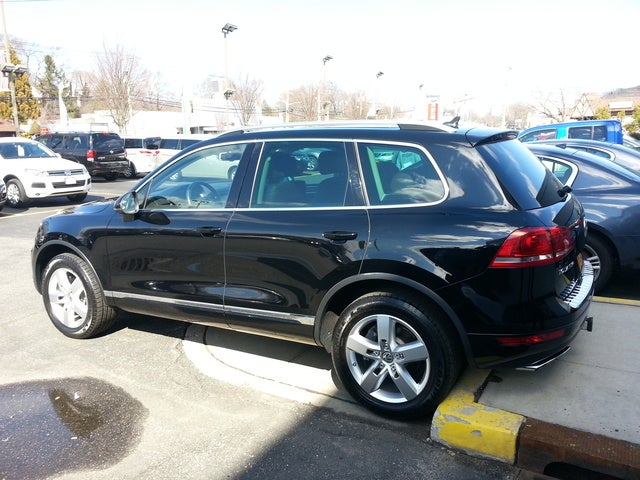 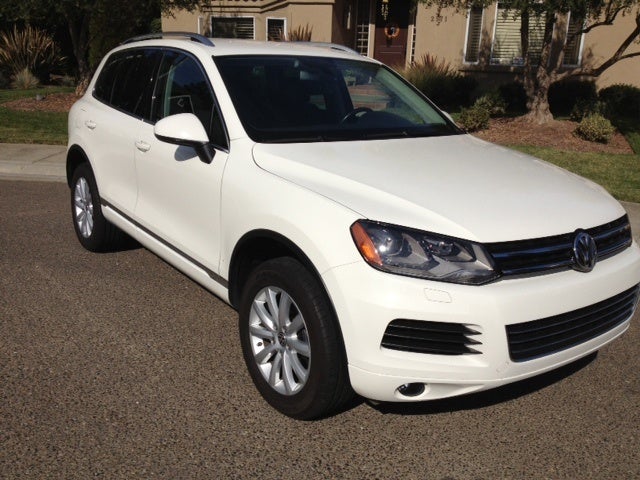 In 2003, Volkswagen explained the Touareg’s unusual name as “literally mean[ing] ‘free folk’ and... the name of a nomadic tribe from the Sahara” (somewhat ironic since the society apparently owned slaves at one time). Volkswagen declared that the name was appropriate since it reflected “the ideal of man's ability to triumph over the obstacles of a harsh land,” as well as the “strong character and self-reliance” of the people. The newly redesigned 2011 Touareg re-enters the field of SUVs, a leaner and greener version, weighing in at about 350 pounds less than the previous edition and offering a new Hybrid trim. The new Touareg has relinquished some of its zest for off-roading over the “harsh land,” but retains its independent spirit with what VW declares to be the world’s first supercharged hybrid powertrain.

Outside, the Touareg is now wider and shorter, but both the wheelbase and overall length were extended for additional cabin space. The front includes bi-xenon high intensity gas-discharged headlights with an adaptive front headlight system, as well as foglights integrated below the air intakes. The rear sports new L-designed taillights and triangular-shaped chrome exhaust tips. The rear tailgate has also been rethought, and can now be automatically opened or closed from within the cabin, at the tailgate itself or with a button on the redesigned key fob. Five new colors will also be available.

VW claims the changes to the exterior are indicative of the refinements drivers will find under the hood. This year, three powertrains are available, beginning with the standard gasoline (premium, mind you) 3.6-liter FSI V6 with 280 hp, 265 lb-ft of torque and a VW-reported 0-60 mph time of 7.4 seconds. VW also notes that the EPA fuel estimates of 16 mpg city/23 highway represent a combined 19% improvement over the previous version of the Touareg. The second-generation Touareg also continues to offer its 3.0-liter turbocharged V6 TDI clean diesel engine, with 225 hp and 406 lb-ft of torque (and a slightly slower 7.9-second 0-60 time) and EPA estimated fuel mileage of 19/28. The diesel is the most fuel efficient of the engines and runs so quietly, most feel it trounces the V6 in all but price. But the real news for VW is the introduction of a supercharged hybrid engine. The Hybrid shifts undetectably between a 3.0-liter supercharged V6 gasoline engine and an electric motor whose nickel-metal-hydride battery pack is charged through regenerative braking. The Hybrid can use purely electric power up to 30 mph. VW notes that another first for the Hybrid is its standard start-stop system, which automatically stops the engine during idle (triggered by the brake) and starts it once again when the brake is released. It can also cut off the engine at highway speeds (called sailing). Both of these features are designed to improve fuel economy with the added benefit of reducing emissions. With fuel economy estimates rated at 20/24, the SUV is competitive with the likes of the 2011 Mercedes ML 450 Hybrid, but Lexus’ RX 450h makes better numbers (30/28 for the AWD and 32/28 with front-wheel drive). The Touareg Hybrid is a jackrabbit, however, with a 0-60 time of only 6.2 seconds, a combined 380 hp, and 425 lb-ft of torque, leaving competitors behind.

Regardless of engine, the Touareg comes with standard 4MOTION all-wheel drive, an 8-speed automatic transmission and aluminum, double-wishbone independent front and rear suspension. VW notes that the lighter material has helped to lessen the overall weight of the Touareg, making it quicker to respond and more precise in its handling. This is not to say that the weight reduction has reduced its ability to haul—with the available towing package, the Touareg can lug 7,700 pounds behind it.

VW has also eliminated the Touareg’s low-range gears for driving off the beaten path, as well as the dual transfer case, so the 2011 doesn’t quite have the rough-terrain cred of past versions. However, reviews note that its short front and rear overhangs, combined with adequate ground clearance (7.9 inches) and independent suspension, still allow the SUV to handle an expedition off the paved road.

Although the Hybrid comes in only one trim, the FSI V6 gasoline and TDI diesel will be available in three: the Sport, Lux and Executive. As the entry-level trim, the Sport includes rain-sensing windshield wipers with heated washer nozzles and power heated side-view mirrors with integrated turn signals (with memory settings added for the other trims). Inside, even the entry-level Sport offers soft-touch, well-padded luxury and style. VW claims to have worked to reduce cabin noise in the redesign with improved acoustics and insulation. Standard Sport interior features include Climatronic dual-zone electronic climate controls, cruise, a multifunction trip computer (presented as a 7-inch data display between the main gauges of the instrument cluster), silver metallic interior trim and 8-way power-adjustable front seats with heat and V-Tex leatherette for the five-seater. The rear seats fold (although not flat) 60/40 to increase the so-so cargo room (32.1 cubic feet) to a more substantial 70.9 cubic feet, although the space still comes up smaller than the Acura MDX's or BMW X's. The Touareg does not offer a third row, but most agree that the spaciousness and comfort of the two existing rows far outweighs a typically cramped third-row option, even though it limits the head count to 5.

Standard technology in the Sport includes a rear-view camera, HomeLink Universal transceiver, Bluetooth connectivity for hands-free phone, Sirius Satellite radio (with a three-month trial subscription), a Media Device Interface (MDI) with an iPod cable, 8 speakers and an HD radio receiver, among other things. A standard RNS850 touchscreen radio/navigation system is new this year in all Touareg trims. The system features an 8-inch screen and DVD/CD player, as well as MP3 playback and satellite/FM/AM stereo and a 60GB hard drive (18GB of which are reserved to store uploaded media).

A step up to the Lux trim will add a panoramic sunroof (350% larger than before, according to VW) and larger, 19-inch wheels. Inside, the cabin is trimmed in Burr Walnut, and the seats are covered with Vienna leather, including a 12-way power driver’s seat with memory.

The Hybrid’s lone trim essentially matches the Executive’s features with only a few exceptions. The Hybrid adds memory not only for the front seats, but also for the side mirrors and the power tilt and telescoping steering wheel. It does not, however, include the premium audio system or 20-inch wheels (reverting to the Lux’s 19-inch alloy wheels).

Safety across all trims has already won the 2011 Touareg a spot on the Insurance Institute for Highway Safety’s Top Safety Pick list for 2011. In addition to earning top scores of Good in all crash tests, the SUV also comes with standard electronic stability control. Other safety features include standard hill descent assist, front and rear vented disc brakes with antilock braking, antislip regulation, engine brake assist, electronic brake-pressure distribution and hydraulic brake assist. Other notable safety features in the Touareg include six airbags and an improved head restraint system to minimize whiplash injury in an accident, as well as an Intelligent Crash Response System (which activates when the airbags are deployed, turning on the hazard lights, shutting off the fuel pump and unlocking the doors).

With a hybrid joining the Touareg this year, the Volkswagen SUV offers a choice for anyone who can stomach the sticker price and doesn’t need seating for more than five. Although not quite the rough-and-tumble off-roader of the past, the Touareg more than compensates with comfortable and responsive riding on paved roads. With a diesel that is hard to beat and a stylish and well-built interior, the Touareg will be a must-look on anyone’s list when browsing midsize luxury SUVs.

What's your take on the 2011 Volkswagen Touareg?

Have you driven a 2011 Volkswagen Touareg?
Rank This Car

How Do I Trade In My Car?

I want to trade in my car

The vehicle tumbles for a few seconds the starts with a cloud of whitish - grey smoke. Some times I have to stop the vehicle from tumbling so that the battery doesn't run down. Within recently the ...

I want to purchase one.

I want to purchase one.

My 2011 VW Touareg's Driver Side And Passenger Side Windows Wont Go Down. B...