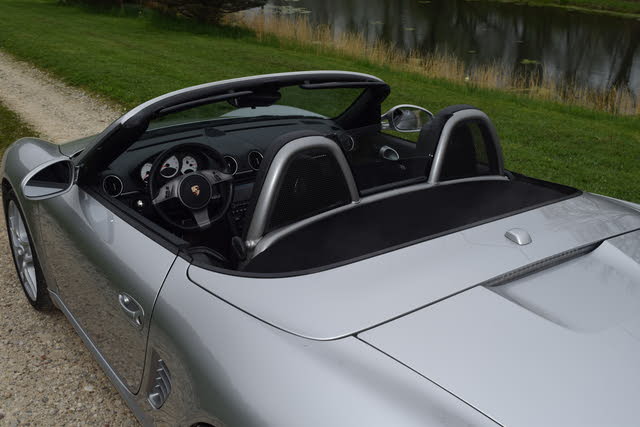 One could surmise Porsche had become leery of the roadster layout. Perhaps unrelated, the fact is Porsche had failed to design a roadster-specific vehicle since the infamous 550 Spyder – the car that killed James Dean. Undeserved reputations aside, all that changed in 1996 with the release of the Porsche Boxster, a car representative of everything it is to be Porsche. With its drop top and neutral handling due to a flat-six engine mounted amidships, the Boxster offers a driving experience arguably more purely Porsche than the iconic 911.

A redesign in 2009 saw a long list of improvements, including an increase in displacement for the base engine and the addition of DFI in the S, changes that resulted in more power and increased fuel economy. There were also suspension and steering improvements, a cosmetic redesign, and transmission augmentation that shortened the throws of the six-speed manual and saw the addition of Porsche’s PDK system. With such monumental changes so close in the rearview, Porsche could’ve understandably coasted through 2010, but has decided instead to unveil an all-new trim – the Boxster Spyder.

Following the release of commemorative and limited production versions of the Boxster Spyder in 2007 and 2009, the full production Boxster Spyder is the lightest Porsche on the market at 2,811 pounds, a full 176 lighter than the already svelte Boxster S. Those weight savings are thanks to a chucked radio and air conditioning system, near bikini top, aluminum deck and doors, and lightweight seats and 19-inch wheels. Given these changes, all reversible through the options list, the Boxster Spyder can officially be called the rebirth of the 550. It gets a suspension lowered by 0.8 inches, with stiffer springs and shocks as well, and the 3.4-liter, direct-injected flat six pulled straight out of the Cayman S for 320 hp, a full 10 hp more than the Boxster S reached 950 rpm later, with a final redline of 7,500. While impressive, the focus is all on weight savings, as evidenced by the cloth loop door handles and the optional lithium-ion battery.

The base Boxster reprises the 255-hp, 2.9-liter flat six, increased in displacement last year from 2.7 liters, while the Boxster S gets the direct-injected 3.4-liter six, good for 310 hp. All three trims get the option of a six-speed manual transmission or the seven-speed, double-clutch PDK automated manual, which results in both increased fuel economy and acceleration. The Boxster and Boxster S put up EPA estimates of 19/27 and 19/26 mpg respectively, but nixing the clutch will bump both cars' figures to 20/29 – not bad for cars that’ll make it to 60 in less than 5 seconds.

Traction control is standard, and the Porsche Stability Management system added Brake Pre-Loading and Assist last year, priming the hydraulic braking system whenever the driver rapidly removes his foot from the accelerator, bringing the brake pads slightly closer to the rotors for decreased stopping time and distance. If you want even better performance from the four-piston aluminum monobloc fixed calipers, ceramic composite brakes are an option.

While the Spyder uses a manual top as part of its weight-savings regimen, the rest of the Boxster lineup gets a power-folding top that will show the sun in a scant 12 seconds. Alloy wheels increase in size progressively throughout the range, starting at 17 and ending 2 inches larger in the Spyder. Regardless of iteration, the Boxster offers an uncontaminated version of Porsche purity, something many have called into question thanks to the Cayenne and the Panamera. Go ahead, prove them wrong – make James Dean proud.

What's your take on the 2010 Porsche Boxster?

Have you driven a 2010 Porsche Boxster?
Rank This Car

Would I Have To Repair This Car A Lot?

Hi, I have always loved Porsche cars and there is one that has fairly low mileage, its cute and sporty. 'what I am concerned about is the maintenance on this car. It is a 6 speed (which I love) b...

39 views with 4 answers (last answer about a year ago)

I Want To Import A Car To Lima, Peru Would Have To Do And As The Means Of P...