New towing packages and technology features make the 2009 Ford F-150 an attractive truck for those seeking utility or comfort - or both. 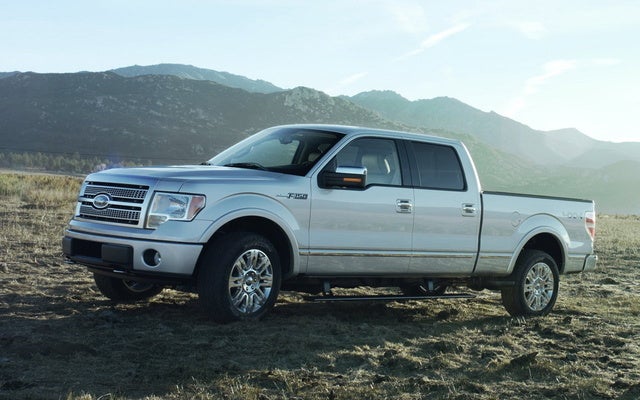 The 2009 additions to Ford's F-150 create a more versatile and all-encompassing fleet that ranges from utilitarian to posh. The F-150 maintains, and perhaps improves, its stance as one of the great American automobiles.

The Ford F-150 receives a bevy of changes for 2009. It seems that losing its spot as the number-one-selling automobile in the U.S. has forced Ford to pull out all the stops. And that's a good sign for truck buyers.

The first, and most elemental change, is to the frame. Ford uses a lighter, more rigid steel structure that makes room for slightly better rigidity and horsepower. The other changes take form in new options and features as well as a new high-end Platinum trim.

Breaking down the F-150 lineup into an understandable format is a task in and of itself. Like other trucks in its class, the F-150 comes in a multiplicity of trims, with options for cab sizes, engines, beds, and more. It’s like standing in line at your favorite ice-cream shop with no idea what you want. Waffle cone or regular? Jimmies or cookie crumbles? Shake or Malt? The details can be overwhelming, so I've taken a stab at a simplified, logical breakdown.

Ford breaks down the 2009 F-150 into seven trim levels, listed in order of ascending starting price: XL, STX, XLT, FX4, Lariat, King Ranch, and Platinum. For each trim level, up to three cab sizes are available: Regular, Supercab, and Supercrew. There are also four box sizes to match your toting needs. Here's a rundown of the trims:

XL – Dubbed "the workhorse" by Ford, the XL is the base trim of the fleet, with a CD player and cruise control optional add-ons. All three engines are available, with the 2-valve 4.6-liter V8 standard.

STX – This level is sport-minded, with more exterior décor options than the base XL, including foglamps, 18-inch aluminum wheels, and a chrome tubular running board. Only the 4.6-liter engines are available, with the 2-valve standard.

XLT – The midrange. All three engines are available, with the 2-valve 4.6-liter V8 standard. Premium cloth seats and cruise control are also standard.

King Ranch – The high end. The King Ranch has 10-way power front captain's seats with both heating and cooling. A six-disc CD changer with an AUX audio input, standard SYNC technology, and a reverse sensing system. Available only with the 5.4-liter 3-valve V8 engine.

Platinum – This level is new for 2009, and Ford pulls out all the stops. Satin-finish grille with chrome mesh insert, 20-inch wheels, 10-way power captains seats with both heating and cooling capabilities, rear-view camera, more chrome along with accented moldings and stylings on the exterior. It also features power running boards, brushed aluminum interior front trimmings, and a big silver badge across the back of the tailgate to let everyone know you have the Platinum. Available only with the 5.4-liter 3-valve V8 engine. 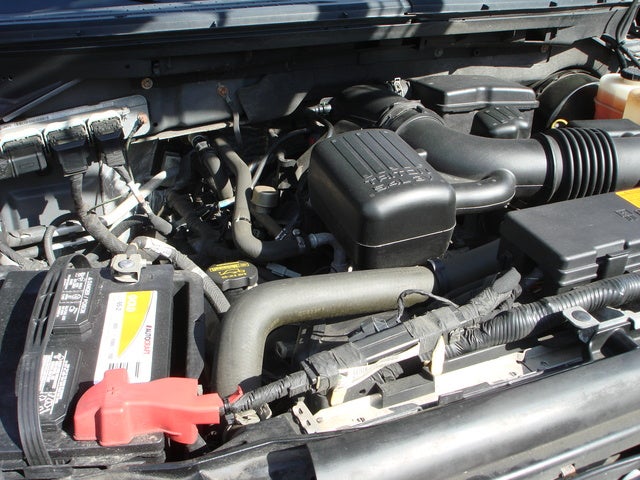 The next engine gets a bump up to 4.6 liters and three valves. The additional valve on the V8 is designed by Ford with the intention of reducing emissions and improving mileage. Horsepower is improved to 292 and the torque bumps to 320 lb-ft at 4,000 RPM. The mileage does show a slight improvement at 15/20 with the rear-wheel transmission, and 14/19 on the all-wheel drive. Both front- and rear-wheel transmissions for this engine are six-speed automatics. 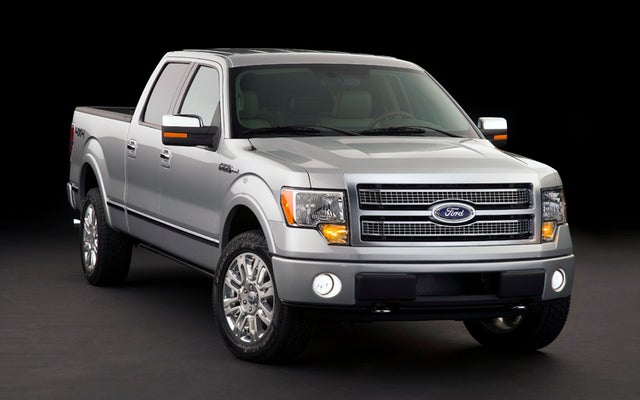 Professional reviews claim the F-150 performs well in both ride comfort and steering and cornering compared to its class peers. As a truck it handles small bumps well and bounces a bit with larger divots and protrusions.

The trailer towing package is standard on the top four trims and optional for the other three. The package includes a class IV hitch, wiring harness, and an upgraded radiator and transmission cooler. Upgrades to that package are also available to all trims except the STX.

Ford adds many new features for those who use trailers. The rearview camera (available if you have a navigation screen) makes backing up to the trailer much easier. For those who have brake-equipped trailers, the F-150 offers a brake synchronization system that seamlessly operates both sets of brakes while eliminating the tugging or jerking involved in older systems. There is also standard Trailer Sway Mitigation for those without trailers with brakes – this senses when a trailer is causing the truck to sway and uses asymmetric braking to bring the vehicle under control.

Another addition is a step-up for the bed, which allows for much easier access to the rear and means you won’t have to step on the back tire any more. It also brings a fold-and-tuck bed extender that takes up very little space when not in use. Ford also brags about the flat-floor option for the crew cab, which facilitates easier loading, and provides a level surface for cargo. The fold-up seats hug the rear wall and provide great space for stowage. The caveat with the flat floor is that the upgraded 700-watt sound system amp gets installed down there, so you can’t have your cake and eat it too.

Available perks include Ford’s SYNC system – a voice-activated, hands-free way to control your phone, music, and navigation. Other upgrades are Sirius satellite service (say that ten times fast!) a navigation system, and a 700-watt Sony stereo.

Trucks are some of the safest vehicles on the road due to their sheer size and weight. The 2009 F-150 brings many standard features to the table. Dual-stage driver and front passenger airbags, front side airbags, front side canopy airbags, four disc brakes, antilock brakes, traction control, and an anti-skid system. Standard on the King Ranch and the Platinum and optional on the XLT, FX4, and Lariat is the rear-view camera, mounted on the tailgate and displayed on the 8-inch navigation screen.

Asking a truck owner about their truck is like asking a parent about their kid – they always defend it. But brand loyalties aside, the 2009 F-150 just hasn’t been driven enough to garner user feedback online. 2008 F-150 owners, however, had good things to say about their truck.

The 2008 version got reviews that mostly praise the truck, claiming owners were happy about the value for the price and the suspension, with some minor complaints about coveted interior additions – some of which showed up in 2009.

Users ranked 2009 Ford F-150 against other cars which they drove/owned. Each ranking was based on 9 categories. Here is the summary of top rankings.

Big Two Toyota Are Not Showing?

Why aren’t Big two Toyota cars coming up? I want to use my financing n a truck ther

I have an intermittent grinding/rubbing noise that started out infrequent and low-key but intensified over time. It sounds awful and is very audible even to the outside world. Note the truck is an '...

i tried to contact the person who selling a 2009 ford 150 for the last couple weeks ,i don't if is a scam or not,it's still for sale on your web site.The private seller is also on facebook is name i...

Loss Of Oil Pressure After Warm Up

I had the engine replaced by local garage the mechanic told me it was done 2000 for the engine 1700 to install then ran the same runs rough after warm up they said the timing jumped another 1500 r...