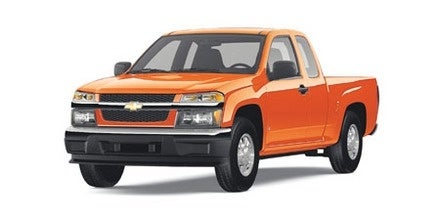 A terrible new suspension in the ZQ8 sport trim, poor if versatile engine options, and an interior that still looks like it belongs in a fleet vehicle won’t add much to the 2009 Colorado’s reputation.

The Colorado is an affordable, competent entry in the midsize truck segment, but it’s not really anyone's best option. Unless you’re a die-hard Chevrolet fan, investigate offerings from some of the other manufacturers, whose options are generally better values.

The Chevrolet Colorado is a compact pickup truck available in regular, extended, and crew cab configurations with either rear-wheel or four-wheel drive and three engine options. While the 4WD should not be left engaged on dry pavement, it does include a low-range gear for off-road use.

Big news for 2009 comes in the form of a new 6,000-pound-towing-capacity V8 available for the first time, as well as a revised braking system, standard sport appearance package, a new on-road sport suspension, and larger wheels and tires for the Z71 off-road suspension. 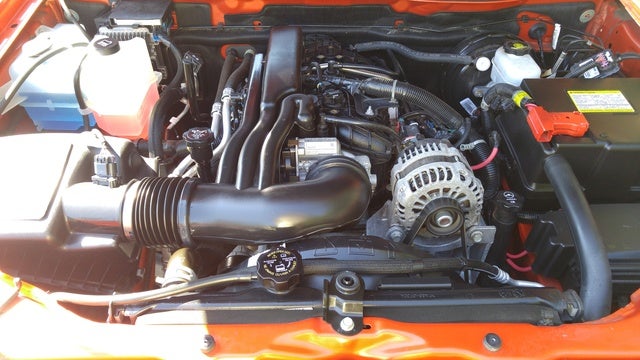 A new engine graces the Colorado lineup this year, adding V8 power to the model. As in previous years, the Colorado is available with a 2.9-liter four-cylinder engine that produces 185 hp and 190 lb-ft of torque, as well as a 3.7-liter five-cylinder engine, producing 242 hp and lb-ft of torque. While the four-cylinder is available with either a five-speed manual or a four-speed automatic, the five cylinder is mated only to the four-speed.

While the four-cylinder has more than adequate power for general driving, it’s found to be a bit stressed during passing and hauling, although less so with the manual than the automatic. The five however, seems to handle all situations with relative ease, and seems to be better suited to the four-speed than the five. Five-cylinder Colorados with the available 4WD are noticeably sluggish when compared to 2WD versions, but not enough to be a concern. However, if towing or hauling is your intention, the V8 is really the only option.

With the newly revised ZQ8 on-road sport suspension package, the ride deteriorates significantly from the base, moreso even than with the Z71 off-road suspension, which benefits from larger wheels and tires this year. Expect a large increase in turning radius with the 4WD over the 2WD and accompanying sluggishness in steering response. Still, the Colorado’s steering is adequately responsive and it has good straight-line tracking.

With the revised antilock braking system the Colorado benefits from this year, Chevrolet claims braking distance has been shortened. Regardless, pedal feel is exceptional, perhaps a high point of the model.

Interior quality and appeal falls at about average for the class, which isn’t saying much. Hard plastic abounds, and while that's no one’s favorite material, it could at least be put together with greater care so test models don’t rattle and chirp. Controls for the audio system and climate control are well-placed, well-marked and easy to use, and the digital gauges are large and easy to read, even at a glance.

Exterior noise is kept nicely under control, more so than in most of the Colorado’s competitors, but the five-cylinder engine is notably unrefined, especially when strained, and the large tires of the Z71 suspension impart significant road noise.

For overall comfort however, the front is spacious both above and below the dashboard, and the seats are comfortable in everything but base trims, even for long-term sitting. The rear, however, tells a different story. Extended cab versions are quite difficult to enter and exit, and once inside, almost completely inadequate for anything but children. Crew cabs are only marginally better, perhaps additionally suitable for adolescents, provided they haven't hit their growth spurt. In all configurations, the rear seats are quite uncomfortable, even for short trips. Forgoing any people-hauling, the rear seats of the extended and crew cab versions provide excellent cargo space, as the rear seats fold down, however you’ll lose 1 foot of bed length with the crew cab.

Available in Work, LS, and LT trims, the Colorado can vary from very sparse to quite well-equipped, with many options for customization. Work trims come with air-conditioning and OnStar and little else, while the LS has an upgraded interior and audio system. Move up to the LT and you can enjoy satellite radio, power everything, and remote keyless entry as well as privacy glass, Bluetooth, and more.

Standard safety features include front airbags, four-wheel antilock brakes, traction control, running lights, and a low-tire pressure monitoring system. OnStar is newly standard for 2009, and side curtain airbags are optional, without which the Colorado earned a “Poor” rating from the IIHS. The NHTSA however, rated the Colorado four stars in all tests excepting front impacts and side impacts for the Crew Cab, which garnered five-star ratings.

Owners have never been impressed by either the interior or towing capacity of the Colorado, although the latter seems to be changing with the introduction of the V8 this year. Still, continual disappointment surrounds what is essentially a back seat in name only. Additionally, almost universally negative response has surrounded the sport suspension.

What's your take on the 2009 Chevrolet Colorado?

Have you driven a 2009 Chevrolet Colorado?
Rank This Car

It Keeps Asking For My Vin I Put It In

How do I delete my posting?

Where Is The Lower Ac Port