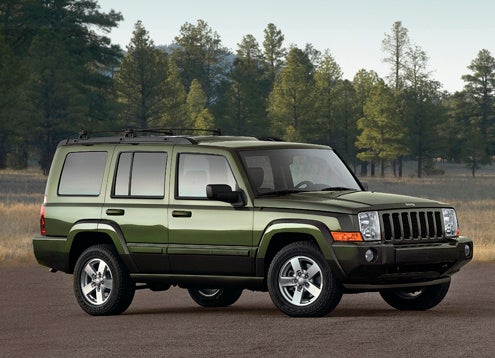 The 2008 Jeep Commander delivers a number of benefits to drivers: It seats up to seven passengers (depending on the trim). It offers tons of cargo space. It's designed for rugged off-road driving. And according to drivers and reviewers, it's surprisingly nimble and smooth for a hunky SUV. Economy may not be the Commander's strong point, and to be honest, it's not the sleekest looking SUV in the garage or parking lot. Still, the 2008 Jeep Commander has a lot going for it as a rugged, functional hauler.

The Commander comes equipped with several new safety and entertainment features for 2008, such as the MyGIG Multimedia Infotainment System (standard on the Limited and Overland trims), which includes a 276-watt premium sound system with Bose Acoustics speakers, a touchscreen, and a 20-gigabyte hard drive for storing music and photos. A Sirius backseat TV system also has been added to the options list for 2008. New standard interior features include an MP3 input jack for the AM/FM/CD audio system.

Jeep has also upgraded the safety features for the Commander, which earned a five-star rating (the highest available) in front-impact crast tests conducted by the government. New optional safety features for 2008 include Hill Start Assist and Hill Descent Control automatic braking (available on 4X4 trims), and Trailer Sway Control, which is available with the Trailer Tow Group package. Standard safety features for all Commander trims include antilock brakes, advanced front multistage airbags, an Electronic Stability Program, and the ParkSense rear park-assist system, which comes in handy when backing up the large SUV.

Drivers won't have to make choices about the Commander's standard features, which are extensive. Power windows and door locks, an eight-way power-adjustable driver's seat, remote keyless entry, a tire pressure monitoring system, side-curtain airbags, halogen headlights, and Sirius satellite radio are all included as standard equipment. Options include a rear-seat DVD system, Sirius backseat TV, and a power liftgate (standard on the Overland).

Drivers and reviewers note that, despite the Commander's size, it's surprisingly nimble, with a smooth ride and acceptable handling. Acceleration suffers with the V6 engine, but improves with the V8s, although the Commander's weight naturally affects its quickness. Alternatively, fuel economy is better with the V6, although none of the Commander's engines will win any awards in that area. The vehicle's quietness and interior comfort also receive good marks from drivers, although some note that the third-row seat can be cramped for adults.

What's your take on the 2008 Jeep Commander?

Have you driven a 2008 Jeep Commander?
Rank This Car

I have a used 2008 Jeep Commander Sport and have had no issues until now. Made a short trip to grocery store, when I got back in,,,nothing. Lights come on the dash but engine will not turn over.??

how put in neutral for towing engine is dead

I have an 08 Jeep Commander that has a knock. I pulled the valve cover off and checked all the rocker arms and lifters they seem to be fine. Check the flywheel for cracks replaced it no problems t...

108 views with 2 answers (last answer about a year ago)

TRY TO START MY 2008 COMMANDER AND I HAVE NOTHING ALL DASH LIGHT WORK, CHIMS, RADIO,AFTER SEVERAL TRIES WITH NO LUCK LET SIT THERE AFTER TRYING WITH SWITCH IN RUN POSITION IT WILL START ON ITS OWN AFT...