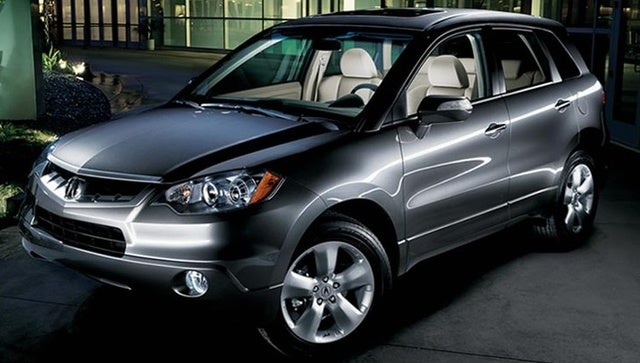 Acura's new crossover SUV features Honda's first turbocharged engine. The RDX was introduced late in 2007, and is carried over for the 2008 model year. The RDX is priced in the luxury sport utility segment, and it combines a sedan-like ride with the added security and versatility of all-wheel drive. A clean diesel variation is reported be in the works for 2009.

Acura's performance-focused RDX is powered by a turbocharged 2.3 liter inline four, which generates 240 horsepower and 260 pound-feet of torque. Power is routed to all four wheels through a five-speed automatic transmission, working in tandem with Acura's SH all-wheel drive system. The SH technology offers multi directional power distribution, from front to back and left to right. Fuel economy is estimated at just 17/22 mpg, and towing capacity is a modest 1500 pounds.

Reviewers and consumers agree that the RDX has a very accommodating interior for a modestly sized SUV, highlighted by a comfortable and spacious backseat. Test drivers the front seats to be cozy enough, while offering good lateral support for aggressive driving. Interior issues include slightly pinched front visibility, some hard-to-manage controls and displays, and noticeable wind noise at higher speeds.

Guru9Y215Q Avoid car gurus at all costs . Truly a waste of time .

Users ranked 2008 Acura RDX against other cars which they drove/owned. Each ranking was based on 9 categories. Here is the summary of top rankings.

Have you driven a 2008 Acura RDX?
Rank This Car

I have a knock sensor code and a check sh-awd sysem. The car is difinintly only using the front wheels. i replaced the sensor but it did not help. I'd like to know how to check the sensor itself and...

I m trying to get a transmission fluid change. How many bottles do I need to get it changed ??

Car Will Not Start

How long from the time I list a car till it's on car gurus?

Whers Is The Amp For An Acura Rdx