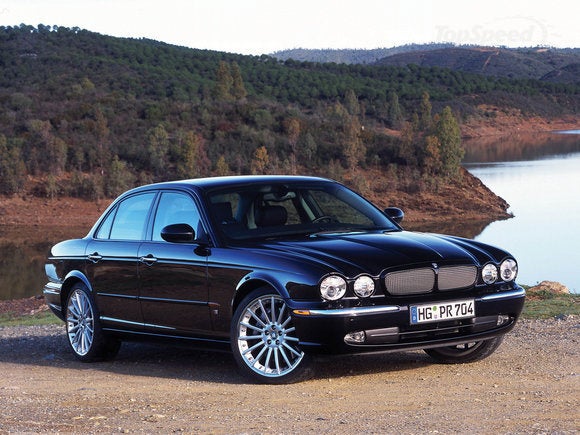 The long-lived XJ is currently in the fourth year of its seventh generation. Additions for 2007 include Bluetooth and upgraded leather for some models.
There are five variations of the full size luxury sedan this year, including an R-Style model and long wheelbase version. All XJs house V-8 engines. At over 205 inches in length, with all models reaching over 4000 pounds, this the largest of all Jaguar sedans. The XJ is also the most expensive.
The two XJ8 models are the low end of the XJ spectrum. They come equipped with all imaginable luxury and convenience features, like the CATS active suspension system, walnut and leather throughout, rear parking sensors, a moon roof, and xenon headlights. The Vanden Plas is the super luxury model, adding features like fold-down picnic tables for rear seat passengers, lambswool carpeting, and a navigation system.
The XJR is a performance-oriented model, adding larger wheels, wider tires, adaptive cruise control and a supercharged 400 horsepower version of the 4.2 liter V-8. The top shelf XJ Super V-8 combines all the best features of the four lower models (including the long wheelbase) to produce a six-figure masterpiece.

Users ranked 2007 Jaguar XJ-Series against other cars which they drove/owned. Each ranking was based on 9 categories. Here is the summary of top rankings.

Have you driven a 2007 Jaguar XJ-Series?
Rank This Car

Cooling Fan Wont Shut Off Untill It Drains The Battery

Can I Schedule A Test Drive?

I have requested a test drive several times and cannot get a courtesy reply from anyone. Why???

When Does My Ad Expire