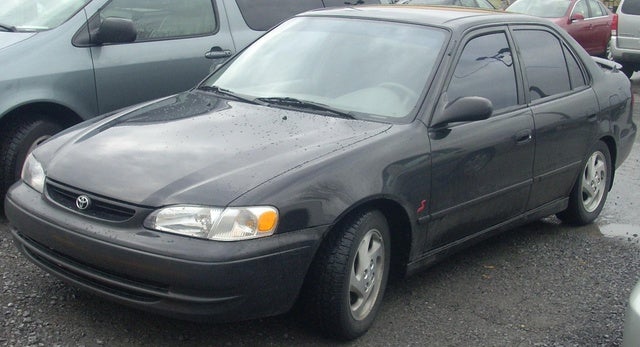 The Toyota Corolla got a redesign for 1998. The new Corolla was bigger and while the styling was still very conservative, the lines of the car were more graceful and modern. New options like side airbags and a CD player were offered.

The 1998 Corolla got a new, aluminum 1.8-liter four-cylinder engine, rating at 120-horsepower--the most ever for a Corolla. Fuel economy was noticeably improved, with the 1998 Corolla coming in at 31-38 mpg. The standard level was renamed the VE, and the LE was brought back. The mid-level CE rounded out the trims.

Drivers of the 1998 Corolla are enthusiastic about its more powerful engine, and increased fuel efficiency, and of course they appreciate the Toyota reputation for dependability. However, some still find the car too small in the back, and others complain about the dull look of the car and the lack of available options compared to other models.

What's your take on the 1998 Toyota Corolla?

Have you driven a 1998 Toyota Corolla?
Rank This Car

Why Air Conditioner Air Is Not Cold Enough?

My car's air conditioner blows cold air, but not cold enough to keep me cool in 80+ degrees. If the temperature is at around 70 degrees, the max cold setting is good enough to keep us cool, but onc...

How do I file a complaint against a dealer on your website for false advertising?

I have 98 corolla le. My cas check engine light comes ON i went to autozone they scan it and show me the code P0500.My car has problems, 1. Loosing normal speed. For example. I drove on highway m...

398 views with 3 answers (last answer about a year ago)

Where Is The Oil Pressure Sensor Located

On the dashboard I get the low oil pressure light. When the engine is cold it does not show. When the temperature guage is in the middle it will come on and usually stay on until the engine is shut ...

Toyota AE100 Having Automatic Transmission Problem, Does Not Engage In Any ...

200 views with 4 answers (last answer about a year ago)