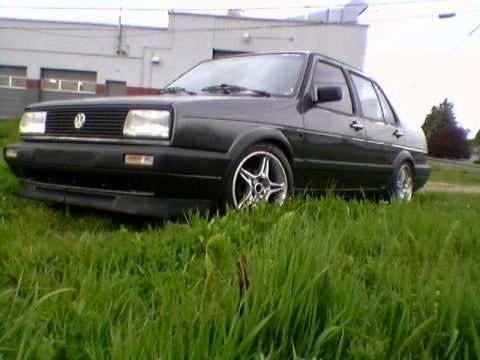 Boxy, safe, but loads of fun, the 1988 Jetta offered a variety of models that varied in engine power and standard features. The Carat was the luxury model, featuring the recently introduced 1.8-liter, 16-valve, 4-cylinder, 123-hp engine and 5-speed manual transmission. Features that were options on other models, such as air conditioning, power windows and locks, and cruise control, were standard on the Carat. The sporty GLI also used the same 123-hp engine and 14-inch wheels. The 4-door base and GL sedan had the 8-valve 1.8-liter engine upgraded to 100 and 105-hp respectively, with a diesel option. A 2-door coupe also carried this engine.

Sporty and fast is how the 1988 Jetta is often described by owners. While it is a great commuter car or city car due to its excellent handling, maneuverability, and fuel economy, its engine power and road-hugging cornering make it fun to drive on the highways or back roads as well. Owners also think it is fearless in the snow, and one of the Jetta's strong suits is the general feeling of confidence and safety while inside. The roomy seating for four and large trunk are also mentioned.

While some drivers say they've never had to do any major repairs, especially on the durable engine, others are disappointed with the 1988 Jetta's maintenance problems and costly parts. Many agree this depends on whether you have a Jetta manufactured in Germany or Mexico, with the former being preferred. Other drawbacks include poor acceleration from a standing stop, some body roll due to its light weight, a clunky automatic transmission, and problems with peeling paint.

What's your take on the 1988 Volkswagen Jetta?

Milton I got rid of my 1988 Jetta Coupe many years ago but before I did, I drove it 315,000 miles and never replaced the clutch. My only gripe was that the CV joints seemed to fail quite frequently but otherwise it was a fun and reliable car.

Dolly Is there much difference in the German to other models ..Jetta 88-89?..having problems with trans slippage otherwise love it

Dolly Love my vw..just need some answers and help

Have you driven a 1988 Volkswagen Jetta?
Rank This Car

Hi hope someone can help i bought a jetta a few days ago and it was driving fine.....all of a sudden the next morning it started bur as soon as u leave the petrol its dying but it starts everytim...

Where Is The Fuse For The Oil Pressure Buzzer

Need an specialist in VW Jetta 1988 to make some questions about repairing it. Please contact me if you could help me.