They were very helpful, we just couldn't come up with my price range 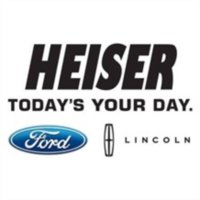 Great guys! Got the car for a decent price, happy with the experience. Car was not perfect, it is a 16 year old car, but they said the would stand behind it and work with me if something major came up. I would definitely go back!

Love Rick for helping me a total professional.

I asked about the van and they answered promptly.

Yes, he contacted me as well as the manager. However, when I told them I was just checking out prices, he continued with emails, please stop.

Emil English contacted me several times regarding my inquires. He was very prompt with his replies. He called me and invited me to come to see the Toyota Venza and offered to stay past closing time if necessary. Emil did just as he promised. I purchased this vehicle from Emil at Boucher Ford. Their team was very pleasant and I really appreciated their service. I would highly recommend Emil English and Adrianna as well as their manager from Gordie Boucher Ford.

They contact me right away,...I have not had time to go and see the suv yet,....but they answered me very well my fist questions.

Was very friendly and helpful. Although I did not qualify this time, it was explained to me when I should consider car shopping again.

Very small and friendly atmosphere and amazing staff. Would 100% come here for my next car

We had a great experience at GA Auto Inc. Marcin was honest and informative about the car we purchased. There were no high pressure sales tactics! Great place to find a good deal on a car!

Did a good job

Izaiah was very helpful in selling my wife and i the Outlander we purchased. Him and the staff at Biggers Mitsubishi wer very helpful. I will be recommending them to anyone whos looking for a car.

I called Biggers Mitsubishi up .set a time to test drive the vehicle on a Saturday morning....but I got off work early on Friday and the salesman I was dealing with had the day off .but he came in just for me so I could test drive it...I had my pre- approval all set up, in and out in 3 hours...that's dedication. Awesome people here..,thanks Biggers Mitsubishi...

Very quick to respond. And followed up with me to let me know the car was still there.

Napleton Cadillac Friendly helpful and honest no pressure to buy a vehicle the price advertise in the internet for the vehicle that's what I paid when I came in no hidden fees I purchased a vehicle August salesman great person work with i would recommend to friends and family to buy from Napleton Cadillac of Libertyville.

Great experience working with Sani the team. Worth the drive

Very good dealer, car in good condition. All the cars seemed like they were very nice. Staff was friendly and not pushy

Jay was direct and helpful. The process was fair and straightforward.

Low keyed, friendly & helpful. Didn't seem all that knowledgeable about the vehicles, so be alert to that, but overall a good experience.

Loved my experience at Silvernail Car Care, I bought a minivan and I love it, everything they promised and more! Thanks Yuri!

We highly recommend this dealer, can’t say enough. They are a small business with big personal interest in their customers. We were very happy doing business with them.

Quick response, very nice car! Moe was super nice. Tried everything he can to help my son get a loan. Will definitely be back once his credit is ready!

I'm from Seattle and I made an inquiry to mr Moe, yes, a guy :-). Very nice guy, I told him my budget and said "can't get that low" so he offered me the cost of shipping as discount. Like I said, "what a nice guy" :-)

Robert was a great guy and worked hard to get me in the car I wanted even with past credit issues...small lot but a good selection of cars for what they have. Yes I would recommend a friend to visit them for their next purchase of a vehicle.

Easy. Is all i can say

Autosource was excellent to work with. Very professional and upfront. Made the buying process easy.

Have had well over 30++ cars all private party deals. For this first time I bought a car from a dealer, Dani made it an easy experience and at a very fair price.

Yes, Joseph was a nice salesman. The car we wanted got sold before we could get Therese.

Robert was a great guy and worked hard to get me in the car I wanted even with past credit issues...small lot but a good selection of cars for what they have. Yes I would recommend a friend to visit them for their next purchase of a vehicle.

They were great about responding to information requests and upfront about title issues. I was looking for a very specific car and bought one elsewhere

Was contacted multiple times and still receives follow up.

Good team to work with

For a smaller Ford Dealership, they were a class act and very friendly. They make feel like part of their family and they will work with you to get a good deal.

Although i didnt purchase a car from them, they were extrmely helphul, prompt and courteous. I was impressed with their willingness to help me find the vehicle of my dreams.