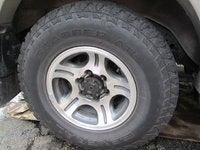 What Are The Power & 2nd Buttons Next To The Transmission Selector?

Did It Come W/ Heated Seats/irror?

what is the price of this jeep?

What are biggest size tires you can put on the LX 450 without replacing the gears?

The LX 450 was the first SUV offering from the Japanese luxury automaker. Introduced in 1996, the LX was priced to complete with the rugged yet well-appointed Range Rover. Essentially a dressed up Land Cruiser, the LX offered some additional refinements not found in its Toyota counterpart. The suspension was softened to provide more of a Lexus-like ride, and interior was re-skinned to better resemble the flagship LS sedan.

The original power plant was the Land Cruiser's 4.5 liter inline six cylinder engine, which provided the 5000+ pound SUV with 212 horsepower. A consensus quickly built that this was not sufficient. As a result, this particular LX model would only last two years before an engine upgrade.

In the mid-90s, there was some debate as to whether or not such a thing as a luxury off-roader really existed. Range Rover was certainly regarded as the closest thing, and it surpassed all competitors in that respect. Lexus was attempting to carve out a new niche amidst some tough competition. While the LX was priced comparably to the superior Land Rover flagship, other lower priced options began to appear. There were no questions about the luxurious fit and finish of the LX, but value in its class was an issue.