Is it really my starter or is it a bad connection to the starter or a bad battery?

i have 2003 Buick Century. Sporadically when I turn the key the cars just clicks..I try it
again and the car starts. Seems to happen only when Temp low and engine cold.  So I
took car to dealer to check out,  after several hrs they called and said battery tests fine
and starter test fine. But lets keep it overnight and try again to replicate problem, after
24 hrs of sitting in cold (below 30F) They got the click and now the starter is "bad"to
the tune of $450
Could this really be a bad connection to the starter motor?

yes it certainly IS...the MAIN ground connection to the chassis/frame is paramount and subject to immediate corrosion from repeated 300 or more AMPs through that single spot with dis-similar materials quickly forms a "semi-conductor" layer...what you must do is disassemble this connection and wirebrush the lug....till shiny and the chassis....till shiny and put them together...also the 1/0 cable connection to the motor block (near the alternator) must be able to draw 300 or more cold cranking amps...if all these grounds are capable of the amperage would have to pull this load duty~....if this don't work, take the startermotor to the NAPA for a FREE bench test~

I'd blame the starter solenoid ....for significant savings~

todays batteries are made from a tin/antimony alloy....they don't use lead anymore...as a consequence they stop taking a charge readily ten percent less per year~ if yours is five years old it's time for a new one....mkay? 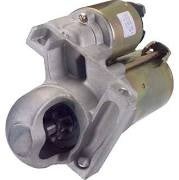 the battery is gonna be more than this~!

It *may* have a starter issue, but I think there are steps that I would take first before undertaking that repair. GM vehicles are sort of notorious for these kinds of issues because they use a side-terminal style battery to save on space. Now the surface area between the internal part of the terminal and the connection is more or less the same, but because the terminals are sleeved in rubber, corrosion will build-up underneath the covers and impede a good, stable connection. Due to their design, you cannot remove the rubber sleeve without cutting it. But that's okay. Here is what you want to do. After removing both leads from the battery, starting with the negative, keep them well apart. Now with a razor-knife, make a small relief cut from the rotating "post" (we call them bullets) to the perimeter of the rubber. This will allow you to put a small flathead screwdriver underneath the "bullet" and after a little fiddling, it will come out. Then simply slide the cover off. Use some battery terminal cleaner (or Coca Cola) and a wire brush and clean up the contact plate as well as the removed post. The posts, or "bullets", are notorious for stripping out so I tend to replace them when I remove them...you can find them at any auto parts store. Do this to both the positive and negative connections. Then follow the leads down to the starter and check them for tightness and corrosion. Clean up as necessary. Recheck. If the click continues, locate the starter relay... Most cars have two fuse & relay boxes, one under the hood for drivetrain and high-draw components, and one in the car for things like dome lights, horn, radio, etc. After locating the relay and noting its orientation and markings, locate a second relay with the same layout and markings. Most cars have a few relays that are interchangeable, so try swapping two relays side-to-side and see if the problem disappears. If it does, replace the bad relay, which will have moved. If not, move them back to the original orientation and at this point, assuming the battery tests good, the starter is the likely culprit. Hope this helps.

Guru1ZCX6 answered about a year ago

I had this click no start problem on a car in the past. Ended up being a faulty ignition switch not sendimg the correct signal to the fuse relay then to starter. As said above 1 time it just clicks, but then the next time you try it, .it may fire right up. I had autozone scan that car 3 times. They said batt was bad, alternator was bad, and the starter was bad. $420 later my problem was still there. Dont get burned! A faulty ignition switch most definetely be the.culrpit when you get is a click 1 time but it starts the next. Just work the key back andnforth. U may have to push key forward and back 10 times before it starts