Where is my starter relay located in my 2000 Saturn SC1??

It should be under the hood,in fuse panel,if not on the driver firewall.

i HAVE THE SAME PROBLEM AND I CAN NOT LOCATE IT IN EITHER OF THESE SPOTS,

The starter relay fuse and others associated like the heater fuse are left and forward of the passenger seat just below the dash its that little kick panel door, hopefully this helps?

I'm having this issue with my '99 saturn SW-1. It is a postal edition with factory right hand drive. The chilton's manual refers to the starter relay but there is not a label on any relay that indicates it is the starter relay. I've checked in both locations specified in this thread.

Hi I believe the relays are in the fuse box inside the engine compartment on the driver's side top of the fender or isellybehind the battery. if you unscrew the top of black box behind the battery that's your fuse block that lllll piwill have your starter relay in it and if you flip the top over that you take off of the fuse box the top on the inside of the top you'll see a diagram of like what fuse goes for what should be in there good luck.

Thanks for your time. I have looked at both locations and inspected diagrams on both lids. None of the relays are for the starter. While i am 100 percent certain that there really is a relay in the circuit that engages the starter, I have not found it yet. Still searching.

Well more likely it's an integrated circuit where it's tied into a combination of things that's my guess. Look for any of the relays to be associated with starting the vehicle it could be a protected circuit where it has a 30 amp fuse on it?

I am looking for the same answer for 2002 SC2 which does not start, sometimes. Since most here are guesses, here is mine. There IS a separate starter relay located behind the instrument cluster. The video below is for 98 S series. I am still looking for gen 3, 2002. https://www.youtube.com/watch?v=UfaOOAOXUHE

The last poster was very awesome pointing out the previous video,I did a little research on this subject and it turns out that I guess after 1999 and starting in the YR. 2000 & up to 2003 Saturn model's I think, there is no starter relay at least this website said there wasn't any starter relay for your car if it's a 2000 so here's a link check it out gives you more information on your car & looks like they're pointing out a bad starter get back to us if neither one of these videos helps you the rich pin video or the one I'm sending you? https://www.2carpros.com/questions/2000-saturn- sl1-problem-starter-relay

Thank for the most helpful response. (Paul) Since I was unable to find the relay and didn't feel like tracing the yellow wire from the ignition, I decided that a push button would be a nice addition to our little SW1, right hand drive Saturn. I also figured that since I was having the exact same problem with the starter (at least since I had removed and re-installed a new starter) that would eliminate any possibility of a relay being stuck closed. I say this because the symptom was that the starter would continue to turn after the key was released from the 'start' position. And as hard as this is to admit, I had the starter wired wrong. The 12V + direct from the battery was on one post, the purple lead from the ignition was on the solenoid post, and the lead that went to the back of the alternator was on the other post. Turns out that the alternator and the 12V hot lead were supposed to be on the same post. But we have a nifty push button installed!

That's cool It must have been used for mail delivery huh right-sided steering wheel. So it turns out it was your starter after all that's good news & you just figured you would bypass everything and use a push button start good for you glad I could help happy Motoring!!! 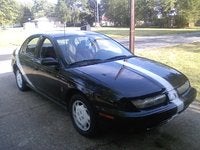