I am having major issues with my fuel system and im losing my mind. This
issue started a few years ago but ill just explain the situation im in now.
During my testing today i tracked down the voltage at the pcm relay, then the
fuel pump relay, then the inertia switch then the fuel tank selector and then to
the fuel pumps.  I tested them in this order because that the order in which
they get power.  I was able to read 12v all the way to both the front and rear
fuel pump connectors.  I got the 12v only in the first 1 or two seconds after
turning the key, when the truck primes then it would drop to like 7v which is
normal.
Now my front tank has been my primary tank because i have always had
electrical issues with the rear tank (2 or 3 years) but for some reason my
truck wouldn't start on the front tank.  This is why i tracked down voltage
everywhere.  I also pulled the pcm out and opened it up to see if my caps
where leaking.  It is a reman board from 2014 and it appears the three larger
capacitors have been replaced (they have yellow paint marks on top of
them) and at some point they were leaking.  I am not sure if the new ones
are leaking or if in the reman process they dont clean anything up.  Now
prior to today i have never been able to get 12v to my rear tank.  A couple
years ago it slowly went out, it wouldn't work under load and i was never able
to get it work again due to low voltage.  BUT today after i took the pcm out
and wiggled the capacitors and checked the all of the soldered connections i
was able to get 12v to the rear pump and my truck ran on the rear pump.  I
started it up and let it run for like 10 minutes on the rear tank, i reved it up
and it didnt fuel cut or anything, it sounded very healthy.  I even started and
stopped the truck multiple times and the rear pump worked great.  At the
same time my front pump would not work.  I got 12v to the connector but i
measured about 10v on the inside terminals of the fuel pump assembly.  I
measured about 1.1 ohm of resistance from the connector to the inside
terminal, probably corrosion somewhere.  I could hear the pump prime even
with low voltage but it wouldnt start the truck or idle.  Unsure if the terminals
need to be replaced or if the pump is weak.
So i left the truck sit for a few hours because it got really hot outside and i
came back out this evening to put the bed back on and just use the truck on
the rear tank while i order a new front pump (assuming the front pump is
weak).  And of course now my rear pump doesnt work.  I only get about 9v to
the rear tank connector.  So i go back through to chase voltage and i get 12v
to the pcm relay but im only getting about 10v to the fuel pump relay.  My
understanding is the power from the battery goes from the pcm relay through
the pcm then to the fuel pump relay and so on.  So the voltage drop is inside
the pcm.  Is my pcm the cause of these stupid electrical issues i have been
chasing for years??

I have two fuel tank selectors, one brand new and one old that i used during
testing.  I also used multiple relays and swaped them around so i know they
arent the issues.  I also jumped the inertia switch while testing.

Anyhow earlier today i read 12v through out the system and my front pump
wouldnt work but my rear would (which is the opposite of what its been doing
for years).  Then i let it sit for a few hours and dont touch any thing and it
wont start and i can only get like 8 or 9v to the rear tank.  Any help would be
appreciated. 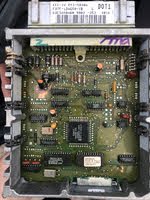 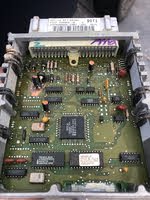