What's a good selling price for a 1975 Chev Silverado?

I have a 1975 Chev Silverado long bed (I think - I don't really understand the difference). Interior is sunbaked and needs work.  Trans is okay-to-good.  Engine probably needs alternator and/or regulator and has been sitting for a few years.  Body is in decent condition.  One not-too-big dent, but it's not a rust-bucket.  Missing trim.  Paint is okay.  I want to sell it, but don't know what to ask.  Suggestions?

First let's start with what it is. Silverado was a trim package back then and became a truck after 1999. Your truck is either a c10 for 2wd or k10 for a 4x4. Short beds are 6ft and long beds are 8ft long. If the paint is faded and has average wear for the age and needs work your looking at $1000 or a little more. Pictures speak 1000 words, and would help greatly with pricing. Is this the truck that has sat in the back yard for the last 10 years with grass growing around it or is it the 75000 original mile truck left in grandpa's garage untouched?

Sorry, but I don't have a picture that can be uploaded. I know that really makes it hard to tell, but you guys have given me some great advice as to where to start. I really didn't know if I should be asking around $500, $1500, $2500...? It's all stock, except for a second gas tank that was added - and then disconnected but is still there. Tires are good but have been sitting. Rebuilt transmission, and I'm not positive about whether the engine is original. Sounds like it's a long bed c10 2wd (thanks for the guidance, Andrew). It's been repainted, but with original green/white colors. Some trim is missing. There's a small dent. And the interior is pretty bad. It's been sitting in a driveway, so outside but not with grass growing all through it. I've had a few people say they're interested but wanted to know what I was asking and I had no idea where to start. So, again, Thanks! 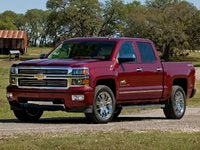