how much horsepower can you get from a Olds 350 Rocket? 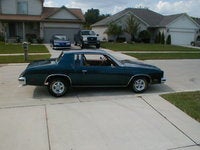 Copy & paste the above url;

The above has some details on the 350 too. Go to bottom of page and click on some of those blue highlighted url's as there is more info on the 350 there too. I put a 71 in my 81 cutlass in which I sometime mistakenly say 72 because when I bought I was told 72 but later when buying parts for it the serial numbers cam back for 71. From the list on that first Url mine in stock form had 260hp & 360 ft pounds torque. Which is 60 more than the next year in 72.

Wow thats the same color as the one 79 my brother had, it also had the 260. It blew the motor and it had the th200 trans, we put in a used stock olds 350 & th350 trans, did away with all the smog junk. Hooked everything up and it was a blast to drive. I do not remember the car it came from but knowing my brother he would of gotton one from alike car & year, We tuned it up & serviced it and was plenty of power. I do remember doing some carb work on it later, May have changed it out or rebuilt it, its been 27yrs so I am not sure exactly but do know the rest of motor was stock at least thats what we were told when we bought the motor/trans and it was not a drag car but it would hold it own with normal street cars. I think stock depending on year stock motors were like 175-220hp. The do not lend themselves to power upgrades as chevy does with parts cheaper, but there is some mods that can be done between years and those parts like the older blocks are better for building, some heads have bigger valves, and some that will make less power for you. Olds performance parts are high price and older guys use to us parts from different engine that made power for the cheapo. Some combinations of chevy pistons work wonders while other require heavy milling to work. My 71 4bbl had tiny oil drain passageways, but had way more power than my brothers did, My oil drains passage ways had to be reamed out larger.

If you could find a 4bbl or change out the 2bbl intake and go with a 4bbl you will be much happier. By 79 the hp would have been lower, so if you can find a good running engine from an older year the more hp & torque you will have. When I went to pick my engine (71) the man had two very rusty shells a 71 & a 72 and had taken them down to the frames & gutted the interiors and was parting them out, The motors were sitting side by side, I thought (or he thought wrong) I was buying the 72 but ended up being the 71 instead, this was before the net so I had no way to know there was a 60hp difference. I just picked the best looking one. Except for exhaust & carb I kept the motor stock. My brother rode in mine and said his had more power, I said I still have to rebuild the carb and I had the 4bbl is wired shut because when it kicks in it gets stuck open and I have to turn off the engine, and after the carb rebuild he knew it was stronger. The first time I kicked the 4 bbl open the tires spun and the whole car came around and off the road I went, just so happen to be a open area, I did not hit nothing. I put giant tires on after that. So know your car is a short wheel base and if your rolling & on any slant or incline and kick in the 4's you may get your rear end tires out in front of you fast (it taking you for a ride).

Btw its a nice looking 79, it is what my brother started with for his first car, looking at is a blast from the past, I will have him take a look at your photo.

Thanks for all the info. I have been saying for years that I wanted to find a 350 Rocket and have it dropped in here with a 4 bbl carb, trying to emulate the 442.

Try junk yards and Craig's List for a donor car to build your 442 clone.

I think stock most 79's with the 260cid came with a 229 rear gearing, so you can install a rear diff with lower gearing, either another stock unit with lower gears (some Monte Carlos came stock with 373 posi-gears) or a gear that you can change it out and install which ever you like. I do think for everyday driving a posi will get you in trouble. If not by black marks but by going into curves wrong, they can whip lash around throw you off the road faster then you can see it happening, Plus wet roads or gravel unless your going straight/flat road as soon as you get on a road slanted to one side a posi will find it and think you just want to have fun and start without you.

A 71 and 72 Rocket 350 with a 4bbl carburetor have the same exact horsepower and torque. The difference is how the power is measured. 71 still used gross ratings, they switched to net ratings in 72.

Looking for a Used Cutlass Supreme in your area?

CarGurus has 32 nationwide Cutlass Supreme listings and the tools to find you a great deal.