2002 ford focus se 2.0 alternator charges only when it wants to... the rest time runs off battery untill it dies.. replaced battery and alternator.. had the alternator charging earlier no its not I on

2002 ford focus se 2.0 alternator charges only when it wants to... the rest time runs off battery untill it dies.. replaced battery and alternator.. had the alternator charging earlier no its not I only run the car when the battery is fully charged since t ..."

I figured out the problem.. silly and basic.. the negative cable on the car has 2 additional grounds off the rear portion on terminal... One goes to ground out the cps. When it would move a certain way. Or hit a bump. The car would cut out due to car runs off battery ...sometimes in would fire back up... From the cat doing that and cps having a bad connection it kept blowing regulator in alternator... You would of never new its was loose unless you grab a 10m socket and tighten that little bit of loosened wire did a lot... 5 alternator later problem solved..

I am on alternator number 4 within a month and can't find out why. I have a 2003 Ford focus that will run fine and then all of sudden be completely dead and needing a jump battery has been replaced too.really needing help but the people I am buying it from don't seem to be able to fix it since they are the ones that keeps replacing the battery 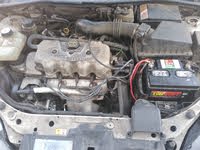