65 buick special. What would be a replacement
engine?  It's a v6 right now.  It's not running.

I would keep it original but measure the engine compartment as see if a SBC will fit or maybe an optional Buick V8 for your year car. https://en.wikipedia.org/wiki/Buick_Special#1964.E2.80.931969

Please keep the original engine with the car so a future owner can restore the car properly.

Is there any benefit to keeping it original? I would like to make it a weekly driver, but how do you know if the engine could keep up? I don't know a lot about cars. First time ever working on one.

The value of the car is greatest with the original engine. I doubt the V6 is fast at all but it should be fine for tooling around town and week end jaunts.

Ok. I will keep it original then. I don't plan on taking it on long trips. Probably the most would be 30 miles to the next town.

Good luck with your restoration!

Your '65 Special used the fairly new Buick V6....The engine came out in 1962 and was 198 cubic inches, in 1964 it was increased 225 ci, used until 1968 when Buick went to the inline 6 which I think was a Chevy 6. So you have 3 years of production that would have had the same engine as yours. GM sold the engine tooling to Jeep and they used it for several years (so there are Jeeps from 1968 to 1971 out there with an engine you can use. In April of 1974 and GM decided to buy it back, they increased the bore and the new displacement was 231 ci and in 1975 Buick started using the engine again. So there is a good chance you can find 225 or 231 ci replacement engine for your car. 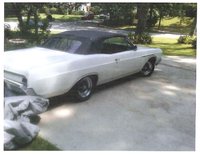 Looking for a Used Special in your area?

CarGurus has 27 nationwide Special listings and the tools to find you a great deal.