My mechanics have said that If my car breaks down again, they don't know what it
could be.
Has broken down about 7-8 times now and the last two times it has been for about 5
minutes. Prior to this it was for about 20/30 mins.

What could cause a perfectly running car to stop?

Is it giving a service engine soon light? If so bring it in to Autozone or Advanced Auto let them put it on a diagnositic to check code. Is your temp rising? Could be a coolant issue. What make and model car?

Car has been running well, two small problems: on a few occassions car was running rougher in the mornigns and the engine light was coming on and off (lasted about a day, happened 2-3 times over a fair few months). Eventually got my car to my mechanics and forgot to mention at service, they changed the battery, break pads and fixed a leak in the water temperature housing... (it was runnigng cold). Within a week the light had come on again for the second time (since service) and was running very rough, like vibrating? I told them about the lights and how it was driving and they changed the coil pack... That night it broke down and it has broken down since then... randomly. Replaced recently... >Coil Pack >Ceroded wiring cleaned? >Fuel pump replaced >New Crank Angle Sensor >Computer put together on new parts? A code came up for the crank angle sensor but besides that I cant recall being told about any. My mechanics must find my limited knowledge frustrating. Have not noticed temp rising.... Holden Astra 2003

thanks! yeaah i switched mechanics (i am 20 and was using the mechanics in the town my parents live). My new mechanic who ive dealt with the last 3 times, are alot more helpful and friendly which is good. light has come back on since the coil pack was replaced...they flash as the car dies but besides that nothing... Car has never broken down before these six weeks... it was a good car! hahaa everyone i talk to is so confused...

it says it specializes in european cars on their website? coil packs been replaced and crank angle sensor?.. Thanks! They have no idea now haha :S

anyone have any ideas? 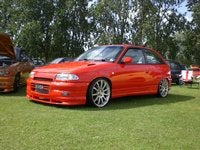 Looking for a Used Astra in your area?