What could a common starting problem with a 1998 Pontiac Firefly be?

I have a 5 speed 1998 Pontiac Firefly
and it stalled. Here's the overall play
by play of what happened. It first cut
out and took 30 minutes to start, then
the second time it took an hour, the
third time it wouldn't start but made a
kind of little short almost attempt and
that was it. The starter tries hard but
the engine won't stay started. What
could it be? The ignition module? It
turns over but won't start. What could
a common starting problem with a 3
Dr base 1998 Pontiac Firefly be?
There's oil in it. Who could I get cheap
roadside assistance from.

The problem was with the fuel injectors... they were clogged. It was a $220 fix including tow. The mechanic took off the throttle body and cleaned them. Runs like a brand new car now. Sean 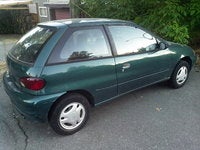