Starts sputtering and spitting when engine gets warmed up

I bought this car from a lady whose boyfriend tinkered with it but it barely ran.
I replaced the gas tank, put the two rebuilt carbs on, new plugs, points,
distributor cap and wires, rotor, and changed the oil. I put some Union 76
fuel (91 octane) in it and she fired up and sounded good. Put the timing light
on it and set the timing. Took it out for a spin and it sounded, and ran
great....for about two miles. The motor starting sputtering, like it was starving
for fuel, it backfired twice, and was cutting out real bad. I pulled over and
checked the motor. Everything looked good, nothing unusual. I let it sit for
about a half hour then restarted it and it fired right up and sounded good.
Drove off and was okay for about a mile then started doing the same thing
again. I got it home safely and parked it for a couple hours. I restarted it and
let it idle in my driveway for about a half an hour and there was no issues with
it. I'm reluctant to take it back out for another drive until I can figure out what
is going on with it. I'm not much of a mechanic. I got this car because I'm a 62
year old guy that used to have one of these when I was a kid. My 16 year old
grandson lives with me and he and I have been working on this thing together
and I want him to have it when we get done with it. Could the distributor
vacuum be causing this to happen? I didn't replace it but replaced the hose to
the right carb. Vapor lock? Trying to understand why the sputtering and
spitting only happens after the engine gets hot. Maybe electrical and not fuel
related? Looking for direction as to what I need to look at. Maybe the coil? I
sure would appreciate any help you can offer. 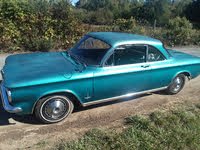