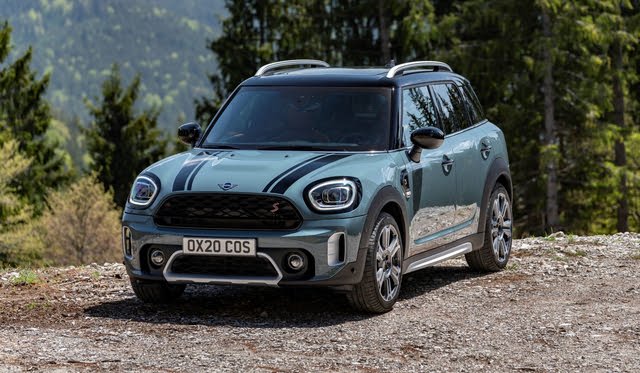 The MINI Countryman is the largest and most versatile member of the MINI lineup. With the increased popularity of small crossovers and SUVs, the Countryman ideally fits that niche with added utility, an upscale cabin, and refined handling dynamics. The Countryman was introduced for the 2011 model year. The second-generation model arrived for 2017 and was refreshed in 2021. It carries into 2022 from last year’s update with minimal changes.

The base MINI Countryman comes with a 134-horsepower 1.5-liter turbocharged three-cylinder engine. The Countryman S comes with a 189-hp 2.0-liter turbocharged four-cylinder engine. The John Cooper Works model also features a 2.0-liter turbo-four, tuned for 301 hp. These engines route power through a seven-speed dual-clutch automatic transmission. Front-wheel drive (FWD) is standard, and all-wheel drive (AWD, which MINI dubs All4) is optional with both engines. The most efficient configuration is the 1.5-liter with FWD. It returns fuel economy of 26 mpg city, 33 mpg highway, 29 mpg combined.

Base MSRP for the 2022 MINI Countryman is $29,100. The Countryman S starts at $31,900. AWD adds $2,000 to the base price of either of these trims. The MINI Countryman John Cooper Works comes standard with AWD and has a starting price of $41,500. MINI also offers the Oxford and Boardwalk special editions, as well as Classic, Signature, and Iconic sub-trims. The Countryman is also available as a plug-in hybrid, which is not covered in this preview.

What's your take on the 2022 MINI Countryman?

Have you driven a 2022 MINI Countryman?
Rank This Car