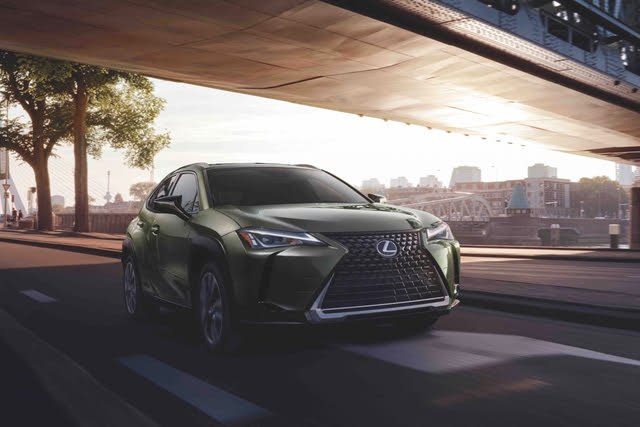 Looking for a New Lexus UX Hybrid in your area?

The UX is Lexus’ smallest SUV, and is available as a hybrid—one of several the automaker offers. Having recently been introduced as a 2019 model, the UX is still in its first generation, though Lexus has given it slight updates over the years to add new features and tech. That said, changes for the 2022 model year are subtle, amounting to new interior and exterior color options.

The hybrid UX 250h is powered by a 2.0-liter four-cylinder engine and two electric motors that combine to produce 181 horsepower, and it gets standard all-wheel drive (AWD). Lexus quotes a 0-60 mph time of 8.6 seconds, while the top speed is electronically limited to 110 mph. Fuel economy is estimated at 41/38/39 mpg city/highway/combined. Lexus also offers the gasoline UX 200, but we’ll cover that in a separate preview.

As Lexus’ smallest crossover, the UX is compact in nearly every way, but it does technically offer seating for five adults. That size will likely prove to be an advantage for the UX’s target market, which Lexus says is urban dwellers. The UX’s size should make parking, maneuvering in tight spaces, and scooting around city streets easier.

All of that said, the UX lags its rivals in several key areas. It has less cargo space than the competition and offers less in the way of towing and off-road capability. The UX’s appeal with buyers rests in its luxury credentials, which are strong. The small SUV’s interior is upscale and easy on the eyes; even the base models feel upscale and special. Higher trims and options packages bring features such as a head-up display and ventilated front seats. While the front buckets are plenty comfortable, parents may find a hard time fitting child seats into the back, especially if one or both adults riding up front are six feet or taller.

Have you driven a 2022 Lexus UX Hybrid?
Rank This Car

Enter your zip to see incentives for a new UX Hybrid in your area.

Looking for a Used UX Hybrid in your area?