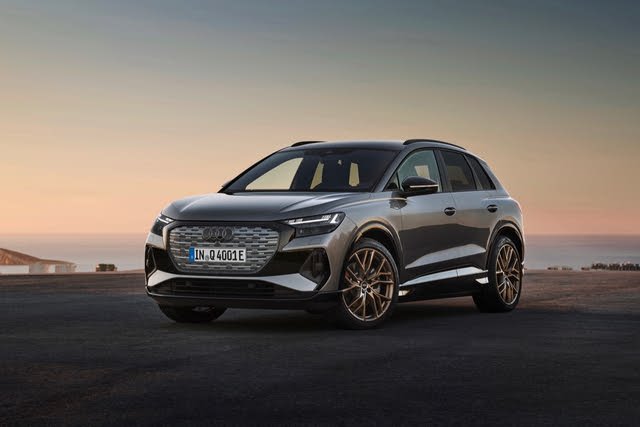 Looking for a New Audi Q4 e-tron in your area?

Though it took Tesla’s success in electric vehicles to activate potential rivals, Audi has been one of the first automakers to seriously respond. Among its growing lineup of electric vehicles, the new Q4 e-tron SUV blends zero-emission driving with the versatility of a compact SUV. The Q4 e-tron effectively slots between the Q3 and Q5 in Audi’s lineup. It is also available in a Sportback configuration, which is covered in a separate preview article.

The Q4 e-tron features a modern, high-tech cockpit, highlighted by the 10.1-inch MMI touchscreen infotainment system and 10.25-inch digital instrument panel. The latter can project the navigation system directly in the driver’s line of sight. The Q4 also features an innovative augmented-reality head-up display which will seamlessly blend the digital head-up display with what the driver can see with their own eyes. The Q4 e-tron also comes with a Sonos premium sound system, Apple CarPlay, and Android Auto.

Audi will offer two powertrain levels in the Q4 e-tron. The Q4 40 e-tron has a single electric motor, which sends 221 horsepower and 228 pound-feet of torque to the rear wheels. The Q4 50 e-tron uses front and rear motors that generate a combined 295 hp and 339 lb-ft, in an all-wheel-drive (AWD) configuration. Both trims utilize a 77-kilowatt-hour battery pack.

Audi quotes a 250-mile electric range for the single-motor Q4 40 e-tron model (official EPA estimates aren’t available yet), while the dual-motor Q4 50 e-tron will get from zero to 60 mph in a claimed 6.2 seconds.

Audi has stated that the 2022 Q4 e-tron will go on sale closer to the end of 2021 with a starting MSRP under $45,000. Audi also notes the Q4 e-tron may qualify for up to $7,500 in federal tax incentives. Depending on where you live, it may also qualify for various local incentives.

Enter your zip to see incentives for a new Q4 e-tron in your area.

Looking for a Used Q4 e-tron in your area?