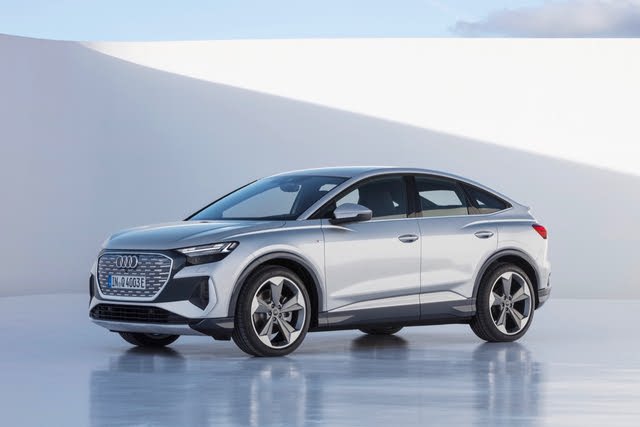 Looking for a New Audi Q4 Sportback e-tron in your area?

The Audi electric vehicle lineup is growing. The Q4 e-tron is the brand’s first all-electric small SUV, and Audi has already announced a Sportback variant as well. The 2022 Audi Q4 Sportback e-tron blends sharp styling with a commanding driving position and all-electric motoring. The Q4 rides on the Volkswagen MEB platform and slots between the Audi Q3 and Q5.

The Q4 Sportback e-tron is loaded with tech features, including the MMI central touchscreen, a fully digital instrument panel, and an augmented-reality head-up display. The latter blends what the driver is seeing with digital displays that seamlessly overlay onto the real world.

The Q4 is also the first production vehicle to use Sonos speakers, and it features a number of recycled components, including upholstery, cabin insulation, and floor materials. Audi has outfitted the Q4 Sportback e-tron with cameras and sensors that allow for a host of driver assistance features.

The Q4 is offered in 40 and 50 powertrain variants. The 40 has a single motor powering the rear wheels, which makes 201 horsepower and 228 pound-feet of torque. Audi quotes a 250-mile range for this version, but official EPA figures aren’t available yet. The Q4 50 Quattro has electric motors at the front and rear making a combined 295 hp and 339 lb-ft of torque in an all-wheel-drive (AWD) configuration.

Have you driven a 2022 Audi Q4 Sportback e-tron?
Rank This Car

Enter your zip to see incentives for a new Q4 Sportback e-tron in your area.

Looking for a Used Q4 Sportback e-tron in your area?