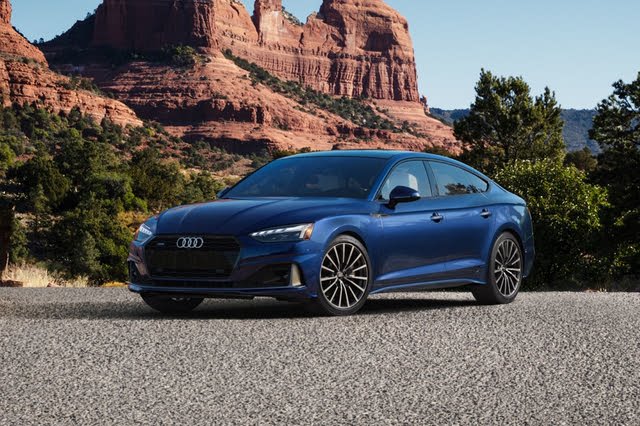 Looking for a New Audi A5 Sportback in your area?

Audi’s sedan, coupe, and convertible lineupa are the stuff of legend. The automaker offers so many different models that it’s hard to keep up with it all, especially when the sporty S and RS cars are taken into account. One car that shouldn’t be overlooked is the Audi A5, which is offered in a few different body styles, including a four-door Sportback shape. Where some automakers would venture to call this car a “coupe,” Audi shies away from that confusing moniker.

The A5 receives few updates for the 2022 model year but does pick up some options and packages. New 19-inch wheels are available and come with the Black Optic appearance package.

While the A5 is offered as a coupe and convertible, the Sportback is something different. Its four-door configuration would lead you to believe it’s a sedan, but its dramatically sloping roof gives it a sleek and modern look. The shape also has the effect of cutting off headroom in the back seat, so the A5 Sportback shouldn’t be a top choice for families needing to carry kids in car seats, or for anyone with tall adult friends that need rides.

One upside to the Sportback shape is its trunk space. Here, a large hatchback provides an easy opening to load cargo and a deep space to hold longer items. The space works better and looks larger in person than the on-paper specs would suggest. Folding rear seats open the space up even more. The car gets a standard power liftgate as well.

Under the hood, the A5 Sportback gets a turbocharged 2.0-liter four-cylinder engine that produces 201 horsepower and 236 pound-feet of torque. A seven-speed dual-clutch transmission and all-wheel drive (AWD) are standard. An upgraded 2.0-liter four-cylinder engine is also available, which produces 261 hp and 273 lb-ft of torque. The base powertrain is good for a 0-60 mph time of 6.4 seconds and a top speed of 130 mph, while the optional engine can propel the car to 60 mph from a standstill in just 5.4 seconds and on to the same top speed of 130 mph, according to Audi.

Every A5 gets a 10.1-inch touchscreen that runs Apple CarPlay and Android Auto. The cars can be upgraded with Audi’s excellent Virtual Cockpit system. Here, it runs on a 12.3-inch digital instrument cluster, and as it does in other Audi models, the system projects maps, audio, and other data from the car’s infotainment system into the cluster.

Have you driven a 2022 Audi A5 Sportback?
Rank This Car

All A5 Sportback Incentives

Enter your zip to see incentives for a new A5 Sportback in your area.

Cars compared to 2022 Audi A5 Sportback

Looking for a Used A5 Sportback in your area?

The A5 Sportback with 19" tires looks fantastic vs. the standard 18" but can you provide a comparison of the driving features and comfort between the two?

2022 Audi A5 Sportback Trims For Sale