Looking for a New Volkswagen ID.4 in your area?

Volkswagen unleashes its first EV for the masses. 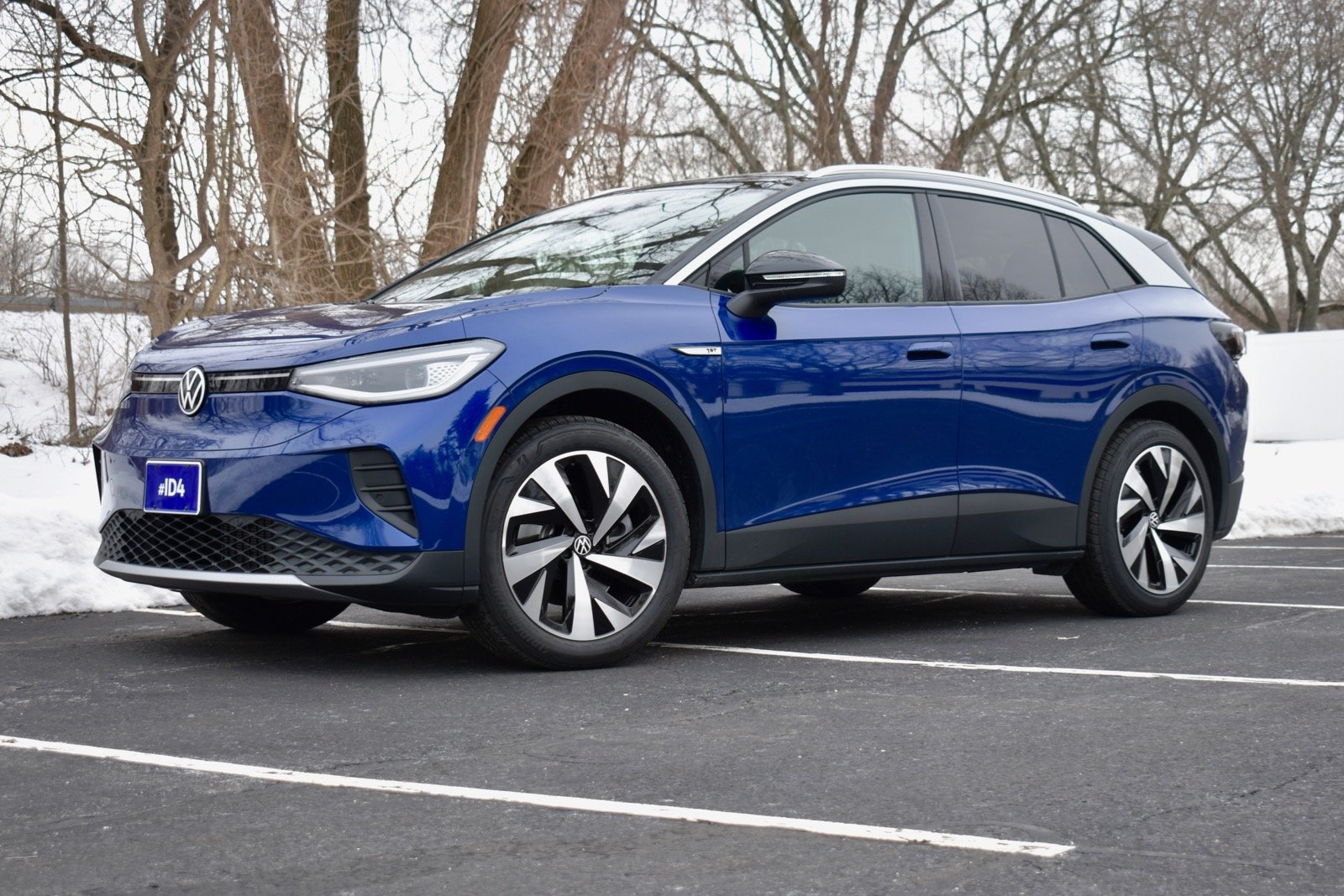 The “Dieselgate” emissions scandal forced Volkswagen to double down on electric cars, and now we’re finally seeing the first result of that: the 2021 Volkswagen ID.4 electric crossover.

VW has made an electric car before, but its last attempt, the e-Golf, was built to satisfy emissions standards, not rack up sales. It was barely advertised, and it was sold only in certain states. That’s not the case with the ID.4, which will be available nationwide and will even be built in Tennessee starting in 2022. Volkswagen views the ID.4 as a rival not to other EVs, but to mainstream gasoline vehicles like the Honda CR-V and Toyota RAV4.

Being late to the party means there are already several other EVs trying to coax new-car buyers away from internal combustion, however. If you want a reasonably-priced EV, the Nissan Leaf, Hyundai Kona Electric, and Kia Niro EV already exist, and General Motors just announced the 2022 Chevrolet Bolt EUV—a new variant of the Chevy Bolt EV with a crossover body style similar to the Volkswagen.

Our test car was an ID.4 1st Edition, which commemorates the car’s launch. This limited-edition model is already sold out, but it’s mechanically identical to the ID.4 Pro S, the higher of two trim levels (along with the ID.4 Pro) that make up the regular ID.4 lineup at launch. 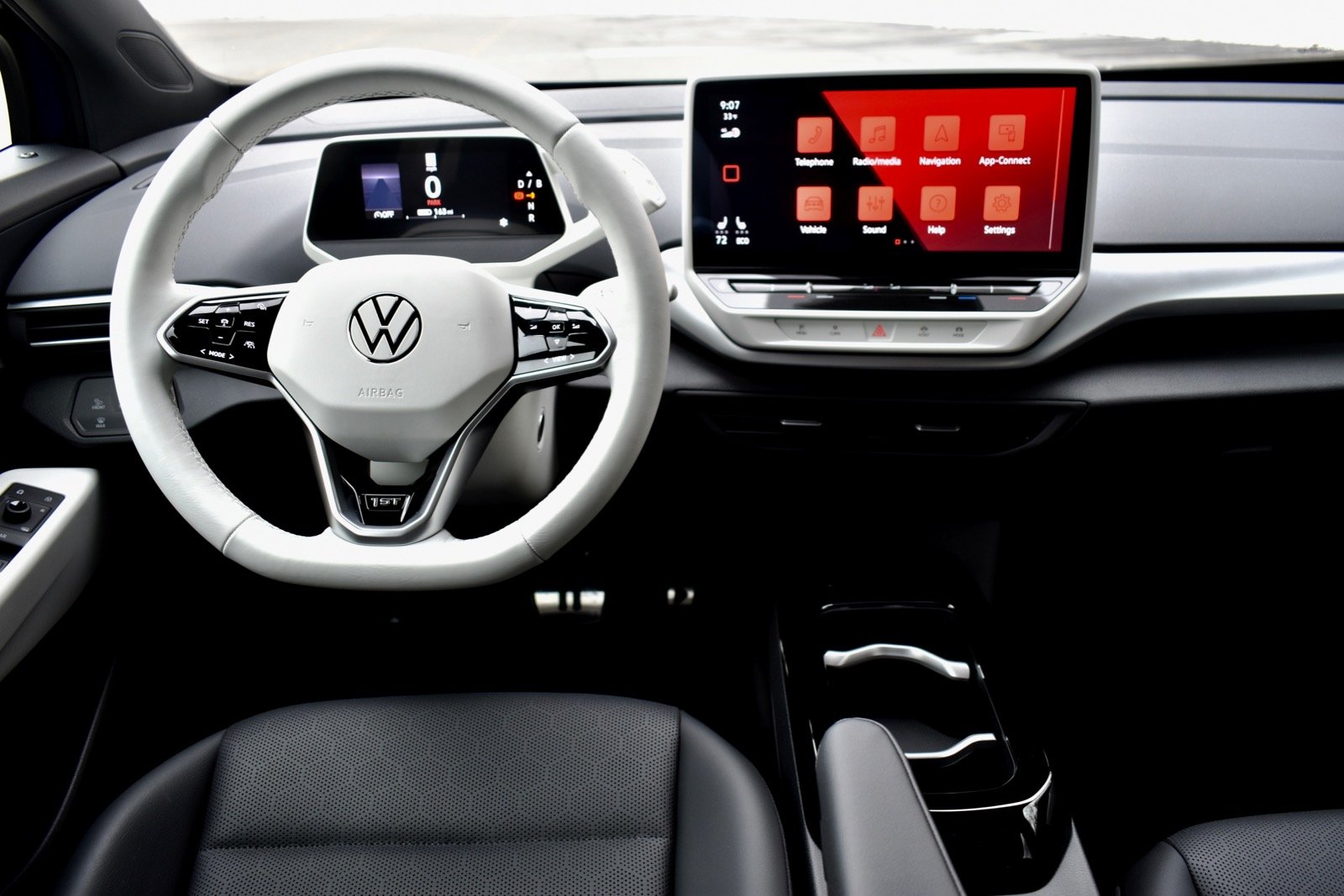 The ID.4 was designed from the ground up as an EV, and Volkswagen wanted to show that off. While some electric cars mimic the styling of their respective makers’ gasoline models, the ID.4 gets a more distinctive look. It eschews the fake toughness of the gasoline Volkswagen Tiguan and Atlas crossovers, replacing straight lines and sharp angles with a streamlined profile and wheels pushed out to the corners of the body.

The ID.4 is one in a series of electric cars based on VW’s EV-specific MEB platform. It follows the European-market ID.3 hatchback, hence the ID.4 designation. Volkswagen knows crossovers sell better in the United States than hatchbacks (it’s about to pull its Golf hatch from this market, after all), so it opted to bring the ID.4 here rather than its sibling. It’s a sensible move—with one potential problem.

Aside from plastic body cladding and a slightly taller ride height, the ID.4 doesn’t look that different from the ID.3 hatchback. SUV-like styling is one of the main selling points of car-based crossovers like the ID.4 but, to our eyes, the VW doesn’t look like an SUV. Granted, that’s also the case with many other EV crossovers. The Chevy Bolt EUV is hard to distinguish from its Bolt EV sibling, and the Hyundai Kona Electric and Kia Niro EV don’t exactly look like trucks. Neither do the Ford Mustang Mach-E and Tesla Model Y, for that matter. Still, it will be interesting to see if the ID.4 reads as an SUV to the average buyer.

The interior design is a blend of Volkswagen’s trademark minimalism and the smartphone aesthetic. Piano black and matte plastic—in a shade of gray that called to mind a 1990s Compaq monitor—push the tech theme, which is something automakers have become convinced customers want. A leather-wrapped steering wheel and cloth seats are standard on the base ID.4 Pro, with leatherette upholstery on the Pro S and 1St Edition models. 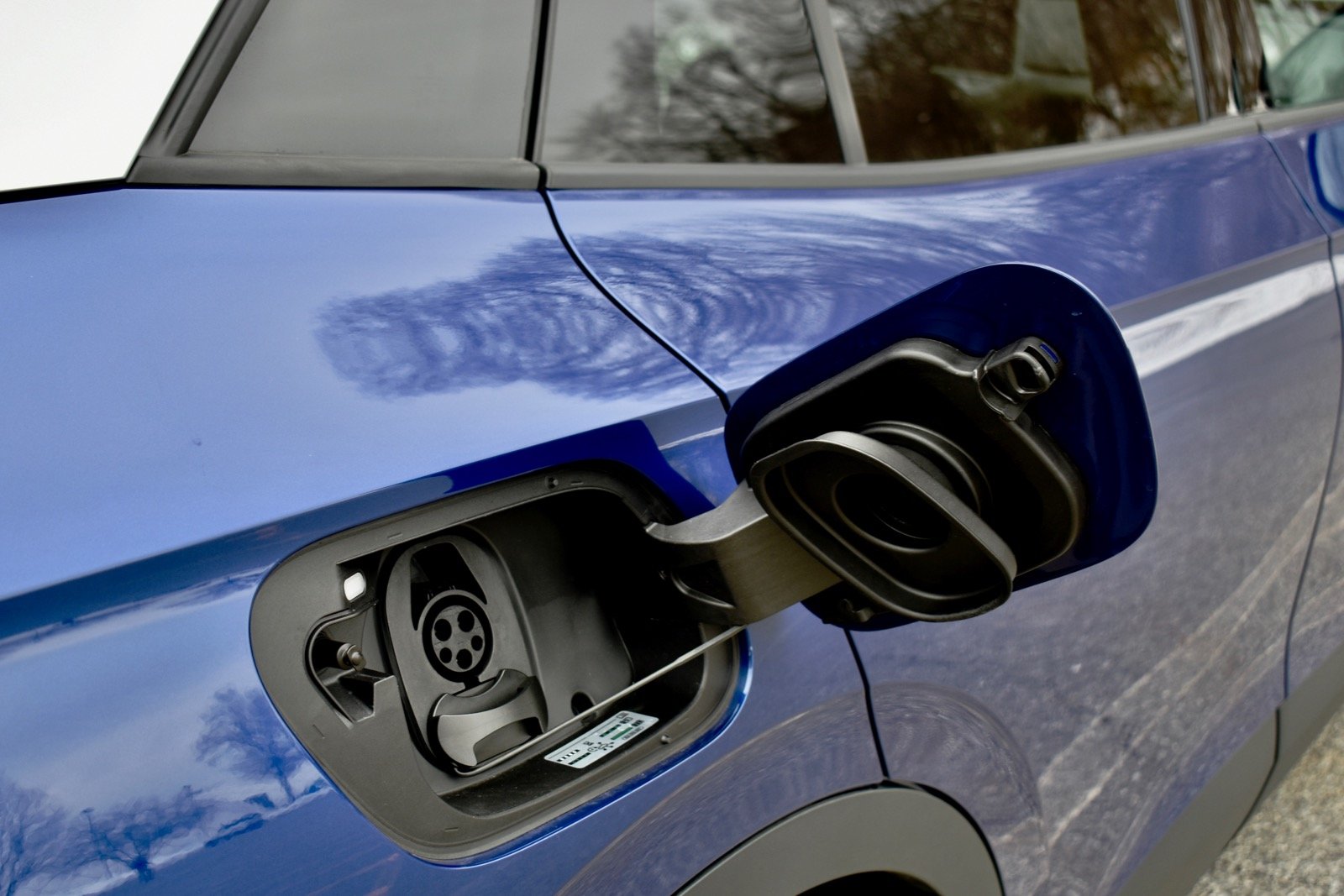 At launch, the ID.4 is available only with a single rear-mounted electric motor, which produces 201 horsepower and 229 pound-feet of torque and is powered by an 82-kilowatt-hour battery pack. It’s also the first rear-wheel drive (RWD) Volkswagen passenger car sold in the United States since the Beetle. An all-wheel-drive (AWD) version, with a second electric motor powering the front wheels, is coming later this year.

RWD is generally preferred by driving enthusiasts because it divides labor more evenly between the front and rear wheels. While ID.4 is no drift machine, RWD did make a difference compared to its mostly front-wheel-drive (FWD) rivals. With the front wheels steering and the rear wheels driving, handling was nicely balanced. A single electric motor also doesn’t affect weight distribution the way an internal-combustion engine does, so you don’t have to worry about tail-happiness.

While it might be a good foundation for a performance car, the ID.4 isn’t sporty. It’s tuned for comfort rather than handling, with lots of body roll in corners, but a smooth ride over bumps and potholes. The electric motor provided more than enough grunt and, as with all-electric cars, instantaneous torque made pulling away from stoplights a lot of fun.

Most electric cars make aggressive use of regenerative braking, allowing for so-called “one-pedal” driving by lifting off the throttle and allowing the car to slow through regen. Volkswagen chose not to do that. In its default setting, the ID.4 relies on friction brakes like a regular car, and even the added regen in “B” mode won’t allow one-pedal driving. VW said this was to take advantage of efficiency gains from coasting, and because it wanted to provide a familiar experience for drivers coming from gasoline cars. EV fans might be disappointed, but this car really isn’t for them. 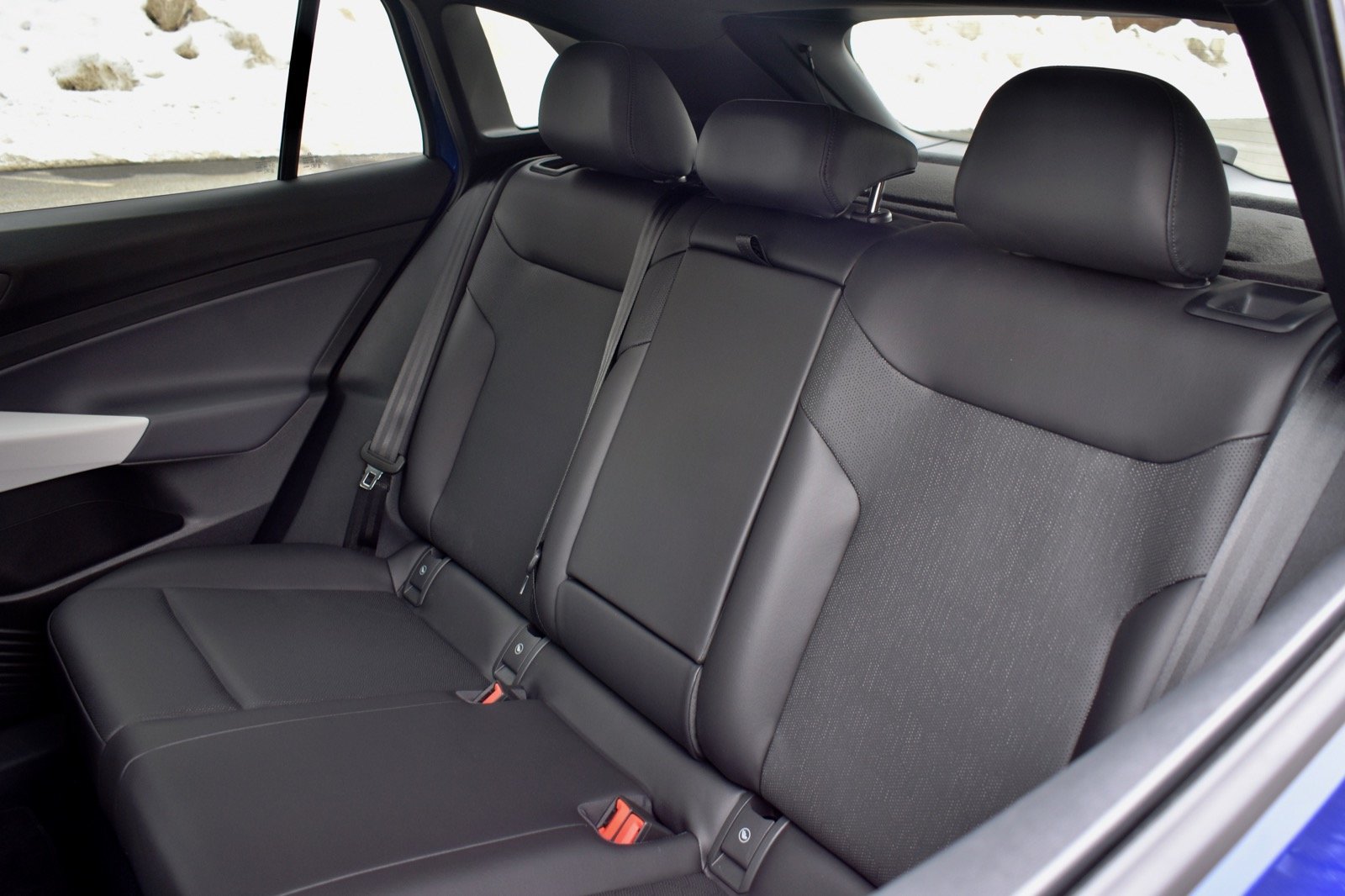 The ID.4 feels like a crossover only compared to other EVs, not the gasoline models Volkswagen benchmarked.

Like most other lower-priced EVs, the ID.4 doesn’t have a “frunk” for extra cargo storage. VW has said that was done to create more cabin space, and it seems like a good decision. On-paper dimensions aside, the interior felt spacious from the driver’s seat. Despite the steeply-raked windshield, forward visibility was good, making parking less stressful. However, rearward visibility was substandard, thanks to thick rear pillars and a small back window.

Instead of a conventional shift lever, VW gave the ID.4 something like a motorcycle’s twist-grip gear selector. It’s located on the dashboard, to the right of the instrument cluster, theoretically freeing up more storage space on the center console. VW didn’t provide much of that, however, as the console itself is narrow and close to the floor. You get plenty of places to put a phone (even the cupholders are perfectly shaped for that), but the console’s narrow nooks and crannies don’t leave space for larger items.

Maintaining cabin heat in electric cars can be a challenge because there’s no internal-combustion engine to act as a heat source. So VW made a heated steering wheel and front seats standard, as applying direct heat to the body is more efficient. That proved effective during our mid-February test drive in snowbound New York State. The seats themselves had a good amount of cushioning, but the driver’s seat lacked thigh support, forcing the driver to sit in an uncomfortable splay-legged position. 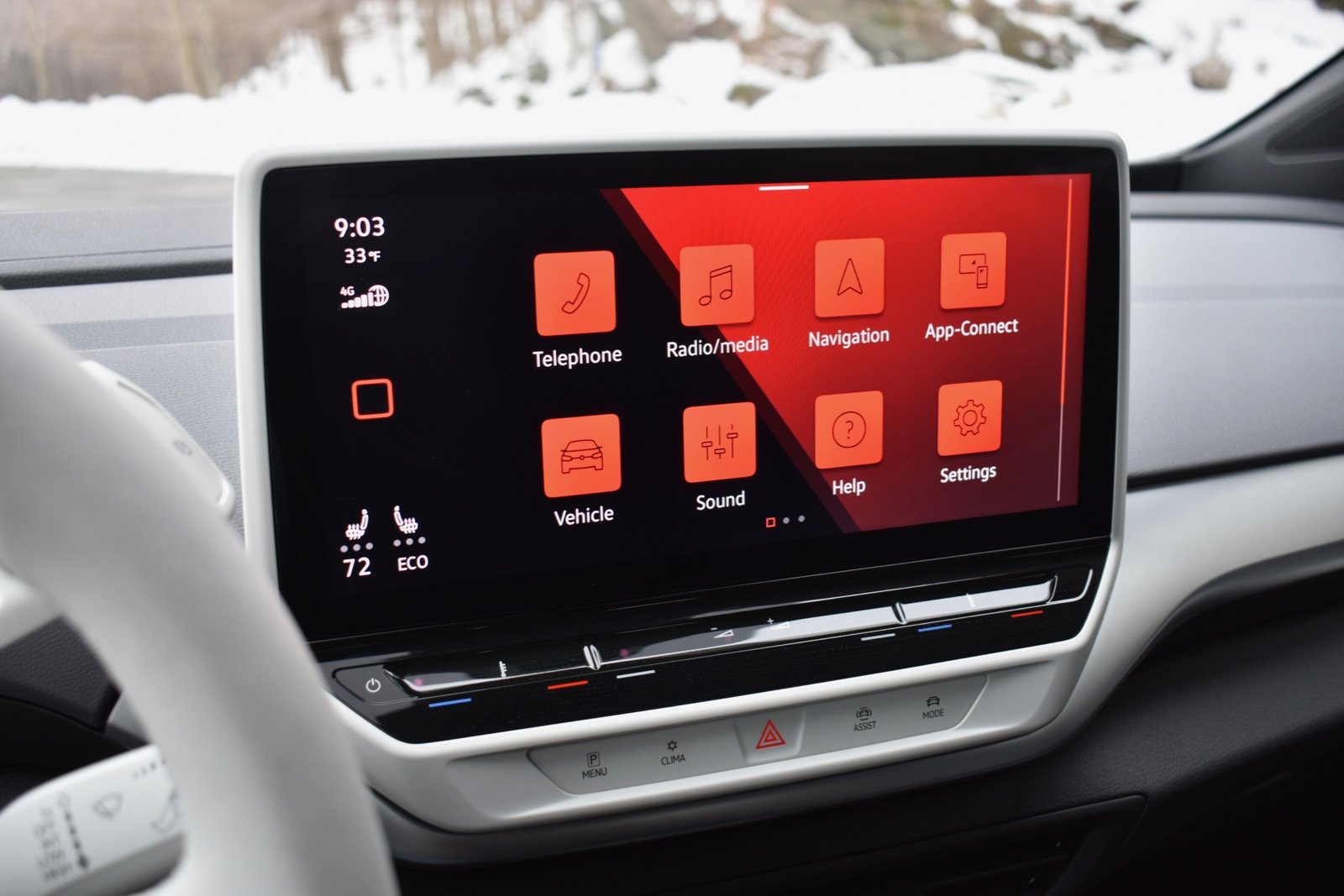 The standard infotainment system includes a 10-inch touchscreen (a 12-inch screen is optional) with wireless Apple CarPlay and Android Auto. A 5.3-inch display screen serves as the instrument cluster, and haptic touchpads are used in place of nearly all switchgear.

This setup looks pretty cool, but we found it unnecessarily difficult to use. The problem with touchpads is that they don’t provide any tactile feedback, so it’s hard to tell if you’re pressing them hard enough without looking. That’s fine for a smartphone, but not ideal when in a moving vehicle. The control setup also requires drivers to relearn certain simple tasks, such as adjusting the mirrors (move the toggle left or right until an icon illuminates, then adjust) or lowering the rear windows (VW only included two switches, so you have to press a touchpad for that). It seemed like Volkswagen was just trying to be different for the sake of being different.

At least VW also included a natural-language voice-control system, allowing you to sidestep the haptic controls. It responds to the prompt “Hello ID,” and doesn’t require you to memorize specific prompts. That means you can just the temperature just by saying “I’m cold,” or switch radio stations by saying the name of the station you want. However, the system was a bit slow to respond, taking a few beats after each prompt.

Also debuting on the ID.4 is ID.Light, a light strip at the base of the windshield designed to communicate information to the driver. Besides giving the interior a Tron-like vibe, ID.Light changes color for different drive modes, blinks when the car is locked or unlocked, and flashes lights on the left or right side of the dash to show which way to turn. It’s an interesting idea, but after the initial amusement wore off, we pretty much forgot about ID. Light.

While some of its features seemed like gimmicks, Volkswagen did get the infotainment basics right. The touchscreen was well-positioned atop the dashboard, with smart-looking graphics and easy-to-navigate menus. We also liked that VW offered a choice between smartphone-like icons for the main menu or a split-screen setup. 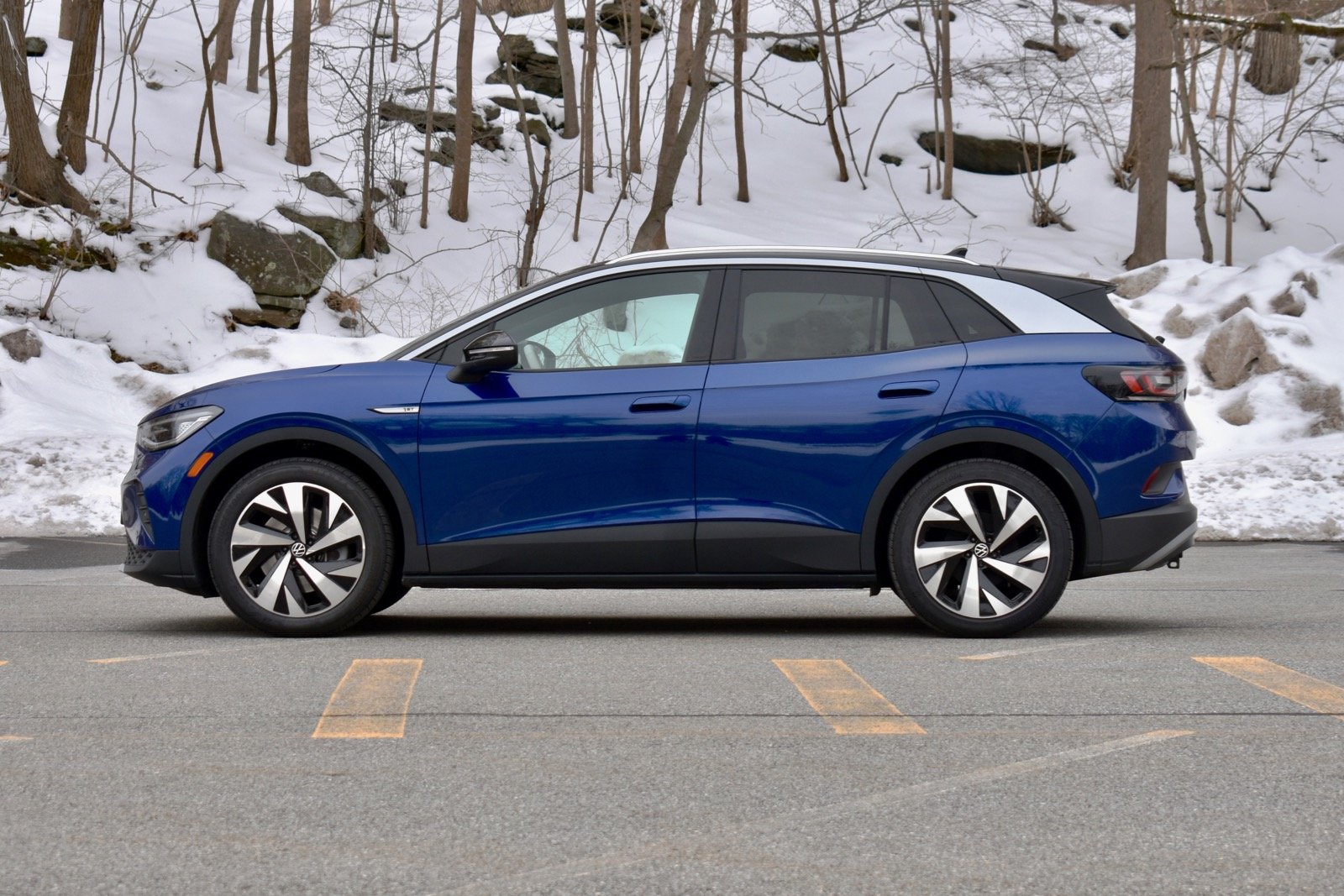 Crash-test ratings from the Insurance Institute for Highway Safety (IIHS) and National Highway Traffic Safety Administration (NHTSA) aren’t available yet, as the ID.4 is a new model.

The standard complement of driver aids includes forward-collision warning, automatic emergency braking, blind-spot monitoring, lane-keep assist, park distance control, automatic high beams, and adaptive cruise control. The ID.4 also gets two new standard features rolling out across the VW lineup for 2021. Travel Assist adds automated lane centering to the adaptive cruise control for highway driving, and Emergency Assist is designed to bring the car to a stop if it detects that the driver is incapacitated.

Travel Assist is comparable to Nissan’s ProPilot Assist system, but a bit less advanced than the Super Cruise system that will be available in the 2022 Chevy Bolt EUV. It performed well—better, actually, than in a gasoline VW equipped with the same system. Unlike most automated lane-centering systems, Travel Assist was able to smoothly follow curves, and it was responsive with acceleration and deceleration. 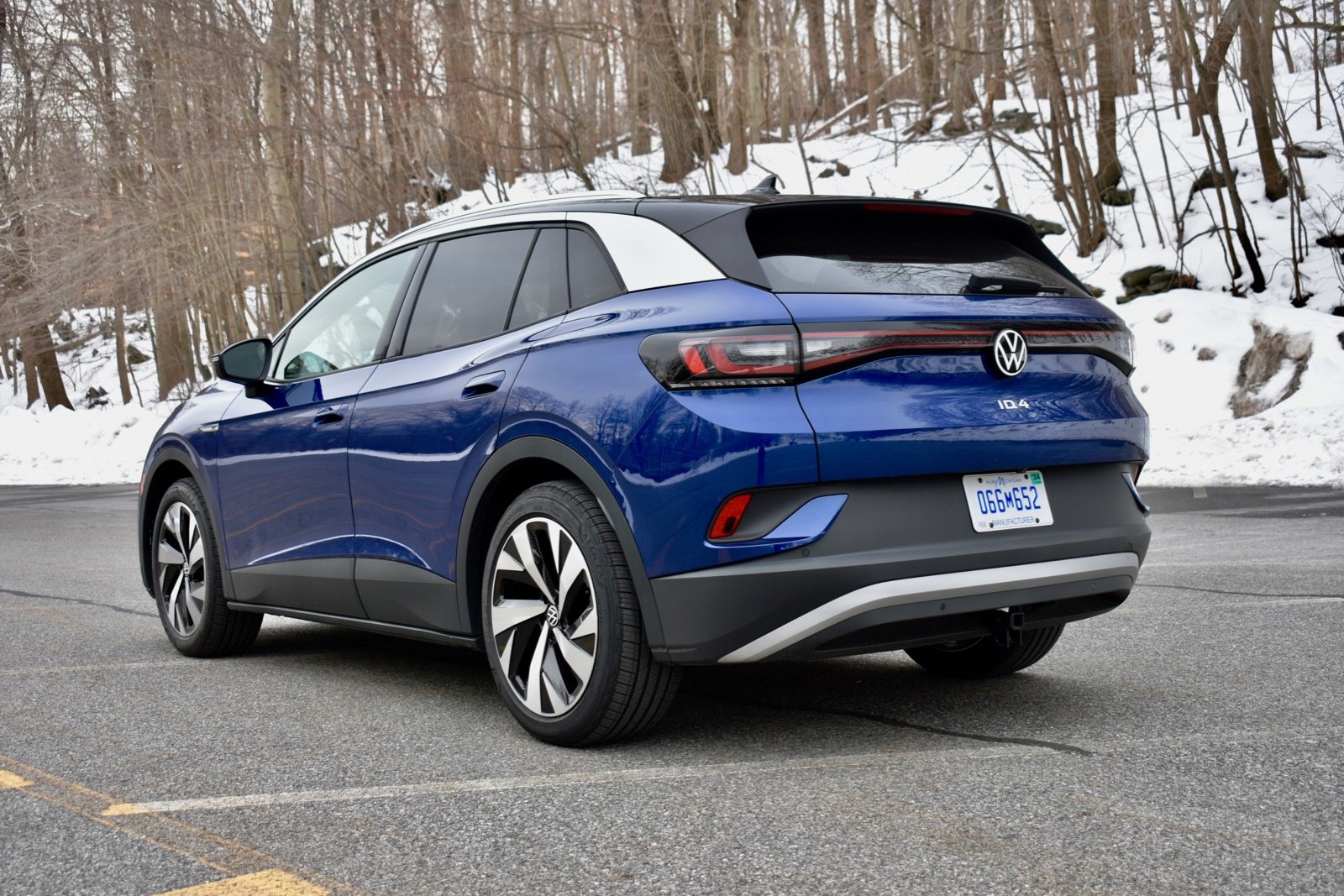 The RWD ID.4 Pro S and 1st Edition have an EPA-estimated range of 250 miles, with efficiency ratings of 97 MPGe combined (104 MPGe city, 89 MPGe highway). The range figure is competitive, but it’s worth noting that rivals achieve similar figures with smaller battery packs. Range and efficiency ratings for the base RWD Pro and the upcoming AWD version aren’t available yet.

Standard DC fast charging allows for a 5% to 80% charge in 38 minutes, according to Volkswagen, and the automaker is offering three years of charging on the Electrify America network (launched as part of VW’s diesel-emissions cheating settlement). The ID.4 is capable of charging at up to 125 kilowatts, but some DC fast-charging stations now offer 150 kW or higher charging. An 11-kW AC charger is also standard, but Volkswagen didn’t quote a charging time.

Pricing for the 2021 VW ID.4 starts at $41,190 for the Pro trim level, and $46,190 for the Pro S. Our 1st Edition test car had a $45,190 base MSRP. The ID.4 is priced higher than most competitors (a similarly-equipped Nissan Leaf SV Plus or Hyundai Kona Electric will cost about $38,000), but VW does qualify for the full $7,500 federal EV tax credit. While Nissan and Chevy charge extra for their most advanced driver-assist tech, VW also makes Travel Assist standard equipment.

The ID.4 is a revolutionary car for Volkswagen, but it’s merely evolutionary in the bigger picture of electric cars. VW’s first mass-market electric car is strong on style and interior space, but weaker on value. However, the important thing about the ID.4 isn’t the car itself, it’s VW’s aggressive marketing and production plans. The Nissan Leaf and Chevy Bolt EV were good cars too, but they were let down by marketing apathy. Will the ID.4 be different?

Enter your zip to see incentives for a new ID.4 in your area.

Looking for a Used ID.4 in your area?